Junk bonds started to decline in June 2014, and earlier this year threatened to implode. Contagion was spreading from the collapsing energy sector to the brick-and-mortar retail sector, telecom (Sprint), the media (iHeartMedia), and other sectors. It was really ugly out there.

As junk bond prices got beaten down, yields soared. The average yield of bonds rated BB, the top end of the junk-bond scale, according to the BofA Merrill Lynch index, went from 4.2% to 7.07% between June 2014 and February 11, 2016. For CCC-and-lower-rated junk bonds – the bottom end of the scale, deemed to be within uncomfortable proximity to default – the yield of the BofA Merrill Lynch index shot up from around 8% to 21.5% between June 2014 and February 12, 2016.

But then the Fed heard the screaming from Wall Street about the chaos in the markets, with junk bonds losing their grip and large swaths of stocks careening deeper into a bear market. Incapable of any independence whatsoever, it brushed rate hikes off the table and changed its verbiage. What ensued was a marvelous rally all around, particularly in bonds.

In two months, the beaten-down junk-bond ETF (HYG) soared 9.1%, though it remains 14% below its recent peaks in April 2013 and June 2014. The yield of the BofA Merrill Lynch index for BB-rated bonds dropped 171 basis points to 5.36%. And at the low end of the scale, all heck broke loose. As these beaten-down bond prices jumped, the yield of the BofA Merril Lynch index for CCC-and-lower-rated bonds dropped 369 basis points to 17.8%. A huge two-month rally (circled in red): 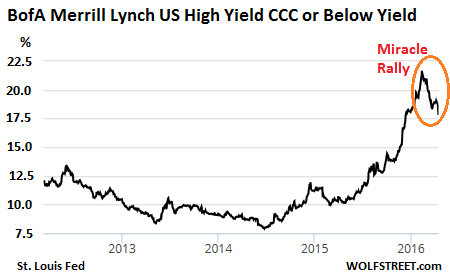 Default or bankruptcy, no problem. It’s been that kind of rally.

So far this year, there have been 37 corporate defaults by S&P-rated issuers in the US, the highest year-to-date since 2009 when there were 53. This wave of defaults is expected to become a tsunami, not because the Fed is going to raise rates, which it might not, but because over-indebted money-losing companies with declining revenues have been pushing their luck, and investors have finally woken up.


To get a better handle on the revenue quagmire in Corporate America beyond the energy fiasco, Moody’s uses the metric of “core business revenues” which exclude “identifiable energy products.” And even those ex-energy revenues have gotten mired down.

The growth of these core business revenues slowed in each of the past five quarters, reaching 1.4% by Q4 2015, according to a report by John Lonski, Chief Economist at Moody’s Capital Markets Research. While “core business revenue” growth might tick up to a still miserable 1.9% in Q1, it “falls noticeably short of the expected 4.8% yearly increase by private-sector wage and salary income and thus warns of a further narrowing by profit margins.”

This has consequences, according to Moody’s: As “subpar revenue growth is likely” to continue, and as margin pressures increase, junk bonds’ “latest rally is susceptible to yet another reversal.”

The downgrade tango, especially at the low end of the junk-bond spectrum where companies are most likely to default, is picking up speed. According to Lonski, the “steepest” wave of downgrades to “‘Caa3 or lower’ since winter of 2008-2009 warns of more defaults.”

Of these 66 downgrades to Caa3 or lower, 35 where energy related and 31 were non-energy. So this is no longer an energy issue alone. Lonski:

The latest surge by downgrades to 66 strongly supports the realization of a roughly 6.0% high yield default rate six to 12 months hence.

The correlation between the default rate and the yearlong number of downgrades to “Caa3-or-lower” lagged one quarter is a very strong 0.96. According to the latter relationship, the midpoint for Q3-2016’s expected default rate is now 6.5%.

A default rate of 6.5% is big. It occurred only four times for my generation:

The last three times were linked to, or followed by recessions. The only exception is 1986:

But now the Fed is still mired in its seven-year emergency zero-interest-rate policy. The fed funds rate is at 0.38%. The 10-year Treasury yield is at a minuscule 1.75%. And these rates, in contrast to 1985, “underscore the very limited scope for interest rate reductions as a means of rejuvenating stagnant expenditures.”

So, this year might be more in line with 2009, 2000, and 1990, when this sort of default rate coincided with recessions. And for bottom-fishers in the now turbulent sea of junk bonds, the two-month rally is likely to reverse. Since contagion has spread to sectors beyond energy, even a rise in crude oil prices isn’t going to provide a cure. And historically, stocks follow junk bonds, so seat belts might be required all around.

In a broader sense, beyond companies rated by Moody’s, total business sales in the US have dropped to 2012 levels. Inventories have ballooned to crisis proportions. And jobs will be next. Read… Why This Economy Is Now Running Aground

33 comments for “OK, I Get it, this Junk-Bond Miracle-Rally Is Doomed”