There are so many reasons to be bearish right now, I can’t count all of them. Dozens of indicators are flashing “warning” signs. The market looks dangerous. Almost everything is pointing toward an intermediate-term decline coming soon.

And if it plays out the way it did when we had the same setup in November, stocks may give up all of the gains they’ve enjoyed over the past few weeks. So you need to be cautious right now. Here are three reasons why… 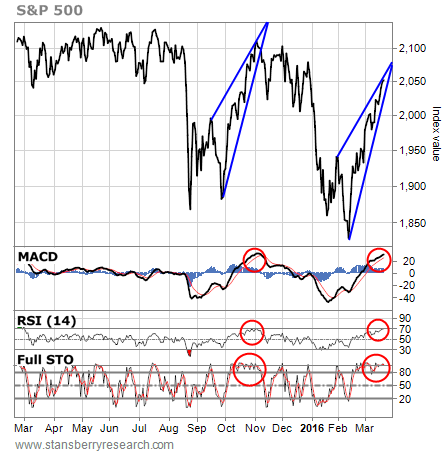 This entire bounce off the February lows has the exact same characteristics as the October rally. Both started from deeply oversold levels, following a sharp selloff in the stock market. They both formed dangerous “rising-wedge” patterns on the chart. And both pushed the daily momentum indicators – like the moving average convergence divergence (MACD), the relative strength index (RSI), and the full stochastics – into extreme overbought territory.

If the similarities continue, then then the stock market is likely headed for a rough period – starting soon.


The second big reason to be bearish is that the Volatility Index (“VIX”) options are pricing in a sharply higher VIX over the next month.

The Volatility Index is a measurement of fear in the marketplace. When the VIX is high and rising, investors are scared and traders are bearish. A low and declining VIX indicates strong bullish sentiment and complacency among traders. But it’s the VIX option prices that can tell traders where the VIX is headed, and by extension, where the stock market is headed. And right now, VIX options are sending traders a bearish signal.

VIX options are European-style contracts – meaning they can only be exercised on option-expiration day. This eliminates any possible “arbitrage” effect (the act of buying an option, exercising it immediately, and then selling the underlying security for a profit). So VIX options will often trade at a discount to intrinsic value.

If it existed as a regular American-style stock option, you could buy the call, exercise it, and liquidate the position all day long, picking up $70 for every contract you traded. The European-style feature prevents that from happening – because you can only exercise this contract on April’s option-expiration day.

In other words, traders are willing to pay 16 times more to bet that the VIX will be higher by option-expiration day in April. And a higher VIX usually coincides with a falling stock market. We had a similar situation, by the way, in late October. Back then, VIX call options were trading for about six times the price of the equivalent put options.

For example, the percentage of S&P 500 stocks trading above their 50-day moving average (“DMA”) lines has hit its highest level in about six years. 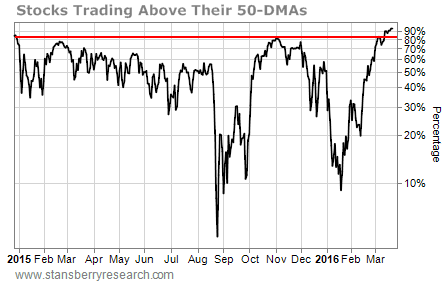 A reading of more than 80% is considered extremely overbought. This indicator closed Monday at 93.4%. (Since it is a percentage, it is almost mathematically impossible for it to go much higher.) Notice also that the current reading is higher than the level it reached in early November – just before stocks started to sell off.

The Summation Indexes for the New York Stock Exchange (NYSE) and the Nasdaq – which also measure overbought and oversold conditions – are back up in “nosebleed” territory. 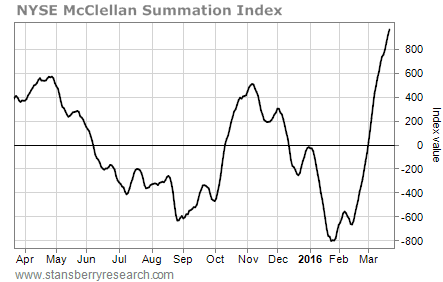 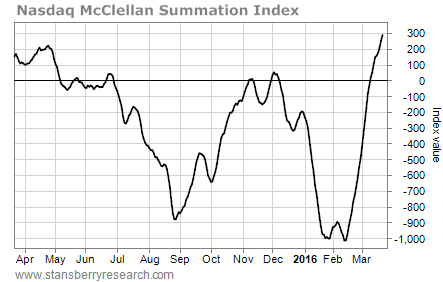 Both indexes closed Monday well above the overbought levels they reached last November. They’re even higher now than they were when the stock market peaked last May.

I could go on… I could show you how the McClellan Oscillators for both the NYSE and the Nasdaq recently hit overbought extremes. I could show you how the VIX is pressing down on its lower Bollinger Band – something that usually happens just before the stock market sells off. I could post a chart of the S&P 500’s “bullish percent index,” which is overbought and trading above its high from last May. You get my point.

As I said above, the market looks dangerous right now. All signs are pointing to an intermediate-term decline coming soon. And if it plays out the same way it did when we had an identical setup in November, stocks may give up all of their gains from the past few weeks. This is not a good time to be aggressively buying stocks. In fact, it’s probably a good time to speculate on the short side. By Jeff Clark, Growth Stock Wire

Suddenly, all of the reasons refiners were profitable have vanished. Read…  This Oil Sector Hasn’t Crashed Yet… But It’s About to

15 comments for “Three Reasons to Be Bearish Right Now”