And it will cause the Banks to Tighten the Noose.

A terrible bit of news went unnoticed in the commotion amid the rebound in oil prices over the past two weeks. While every news outlet shouted about Iran and OPEC, a U.S. energy icon quietly announced news that could potentially shatter the industry.

As I’ve explained recently, many oil companies are teetering on the brink of bankruptcy. But news out of Alaska could lead to disaster.

It just announced a 65% drop in its economic oil reserves.

We’ll explain exactly what that means in a moment, but you can expect the numbers that the other area shale explorers release in the coming weeks will be even worse.

From 1968 to 2015, Prudhoe Bay was the most prolific oilfield in the country, according to the U.S. Energy Information Administration (EIA). Today, Prudhoe Bay ranks third in the U.S. behind Texas’ Eagle Ford and Spraberry Shales. Prudhoe was so large, three major oil companies – BP, Arco, and Humble Oil – spent $8 billion in 1977 constructing the Trans-Alaska Pipeline System (TAPS) to bring its oil to market. That’s more than $31 billion in today’s dollars.

For a while, that investment paid off. By 1988, the field produced nearly 2 million barrels per day – almost as much oil as the entire state of Texas. From 1985 to 1995, the field produced as much as 25% of the entire U.S. oil output. In 2013, the North Slope fields still produced more than 479,000 barrels per day, though that accounts for only about 5% of U.S. production. In 2014, more than 12.5 billion barrels of oil remained in the area, according to the Alaska Oil and Gas Commission. But that’s actual barrels… not “economic reserves.”

Even though an oilfield can hold a tremendous amount of oil, only some of that oil is profitable at certain prices. Those barrels are called economic reserves. And that’s where the problem lies. 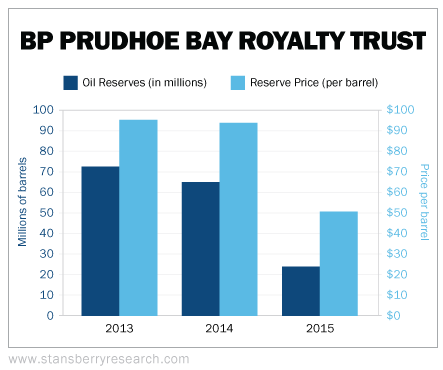 Prudhoe Bay is a giant legacy field, with a vast network of pipes and wells already in place. So production costs are lower there than in most shale fields. So if Prudhoe Bay’s economic reserves fall 65%, the rest of the industry is in big trouble.


Reserve calculations will be a big problem for most U.S. oil companies as they report over the next few weeks. Using the new $50.28-per-barrel price is going to result in a massive reduction in U.S. oil reserves.

In some cases, certain companies could have zero economic reserves left.

According to Bloomberg, only one shale oil region (out of 38) – Oklahoma’s SCOOP – is economic below $50.28 per barrel. Even if we factor in lower service costs – which dramatically increases risk – only 10 shale regions are economic…

Notice that some high-profile shales aren’t on the list. For example, companies drilling in the Bakken’s Elm Coulee region need oil prices to stay above $72 per barrel to be economic. Companies drilling the Permian Basin’s Cline Shale need $64-per-barrel oil to make money.

That oil won’t be considered reserves this year. Don’t be surprised to see some of these shale explorers take major reserve decreases. When that happens, the banks will have no choice but to tighten up the amount of money they can lend. Less collateral means smaller loans.

The next leg down will be on these reserve revisions, and oil explorers are going to feel the pain. By Matt Badiali, The Growth Stock Wire

And yet, “zombie producers” are getting new money. Read…  What Concerns Me about this Rally in Oil

11 comments for “The Terrible Oil News Nobody Noticed”