Pop Quiz! Without recourse to your text, your notes or a Google search, what line item is the largest asset in Uncle Sam’s financial accounts?

The correct answer, as of the latest quarterly data, is … Student Loans.

The rapid growth in student debt has been an ongoing topic in the financial press. A stunning chart that will continue to haunt us illustrates the rapid growth in federal loans to students since the onset of the great recession. The chart is based on the Federal Reserve’s Financial Accounts data (available here) for government’s assets and liabilities.

For a dramatic look at the data, here it is with a standard linear vertical axis. 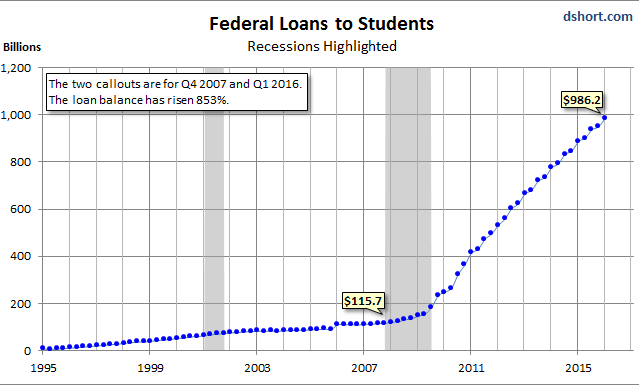 And here it is with a log-scale vertical axis: 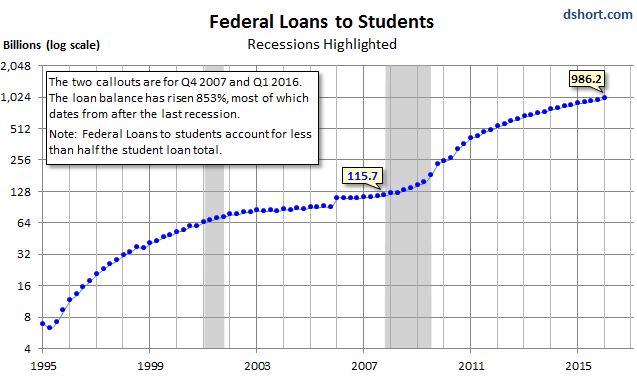 As we point out on the chart, the two callouts are for Q4 2007, the quarter in which the Great Recession began (December 2007) the most recent quarter on record, Q3 2015. The loan balance has risen and astonishing 818% over that time frame, most of which dates from after the recession.

This chart only includes federal loans to students. Private loans increase the debt burden. The Federal Reserve Bank of New York regularly tracks household debt and credit. In their most recent update, they calculate student load debt to be nearing $1.2 trillion.

But back to our quiz. Student loans may be a liability on the consumer balance sheet, but they constitute an asset for Uncle Sam. Just how big? It’s 45% of the total Federal assets. This is about 8.1 times larger than the 5.5% for the Total Mortgages outstanding and 6.0 times the size of Taxes Receivable at 7.6%. 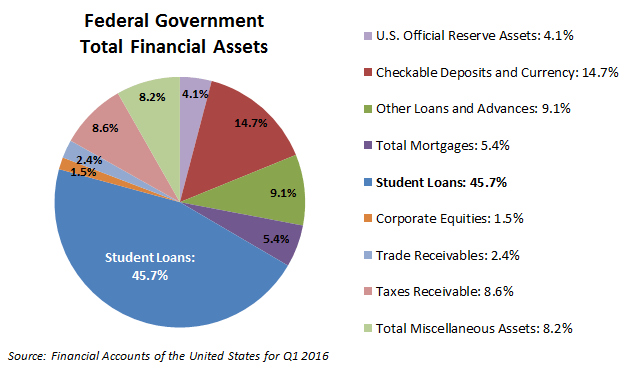 Interestingly enough, the 45% referenced above is off the peak in Q1 of 2015. Here is a look at how this metric has changed since 1995. 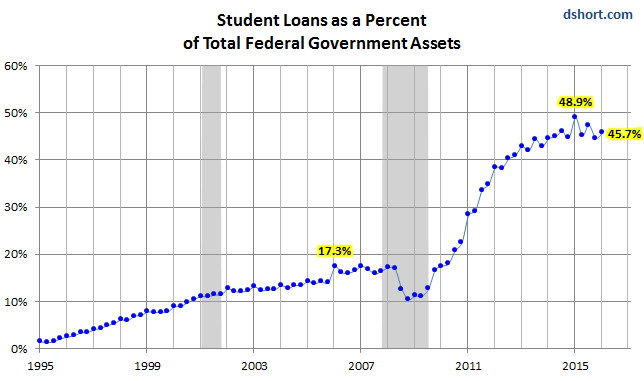 Of course, assets are, sadly, the trivial side of Uncle Sam’s Financial Accounts balance sheet — about $1.98 Trillion. The liability side totaled $17.67 Trillion at the end of Q4.

The student loan bubble, the biggest slice in Uncle Sam’s asset pie, will haunt us for many years to come. By Doug Short, Advisor Perspectives