This is no longer a blip, but a new reality.

It is by now an indisputable fact, driven home by just about everyone, including the Dallas Fed, that the Texas economy is big, diversified, and “highly resilient,” and that the collapse of the oil boom, while it may cause some “negative ripple effects,” won’t dent the overall economy.

Dallas Fed President Robert Kaplan himself had pointed that out. The energy sector accounted for only 2% of the state’s employment – albeit well-paid employment including many specialized engineers – and 10% of the state’s GDP, “a good deal lower than in the 1980s, when that oil bust pushed the Texas economy into a major recession,” he said.

So, well, yes, job growth came to a crawl as the manufacturing and energy sectors shed jobs; the unemployment rate rose from 4.4% at the beginning of 2015 to 4.6% at the end of 2015. Kaplan sees “a further rise” of the unemployment rate in 2016, with risks to his forecast being “to the downside if oil stays at or below $30 per barrel for an extended period.”

But the service sector “showed steady, moderate growth,” he said:

This recent economic performance has been bolstered by the diversified nature of the Texas economy. While Houston’s growth has been brought to a halt by the energy downturn, Austin, Dallas, and San Antonio have shown strong growth and continue to attract people and firms from around the country and the world.

And he expects “this resiliency and underlying strength to continue as the negative impacts of energy begin to dissipate in the years ahead.”

But retail sales in Texas paint a different scenario.

Since their Financial-Crisis low, retails sales in Texas have been booming, in line with the oil boom at the time. Sales tax collections, reported by the Texas Comptroller of Public Accounts, soared 46% from the first half of 2010 to the first half of 2015! But then it all came unglued.

Sales tax collections don’t capture every retail sale. Basic food products like flour, sugar, bread, or vegetables are exempt. Motor vehicle sales and rentals are reported separately. Since the data is not seasonally adjusted, it can only be compared year-over-year. Sales tax collections lag sales by one month, with collections reported for February representing sales that occurred in January. And they’re raw data, not based on estimates, surveys, or opinions, but on dollars that people actually spent, and so they give an unvarnished glimpse at reality.

The retail sales boom in Texas first tripped up in June and August last year, when sales tax collections declined year-over-year for the first time since March 2010. Then in October, collections dropped 5.4%; in November, 3.3%; in December 1.0%. In January – for December’s crucial holiday sales – collections fell 3.9%. And now the Comptroller’s office released data of sales tax collections in February: they plunged 6.8%!

It was the fifth month in a row of declines. Over those five months, total sales tax collections fell 4.1% compared to the same period a year earlier. This is no longer a blip. This is a new reality.

This chart by “David in Texas,” who gleaned the data from Texas Transparency, shows how the 5-year retail sales boom, as depicted by sales tax collections, began hissing hot air last year. I circled the months of year-over-year declines (yellow = 2014, neon-green = 2015, dark blue = 2016): 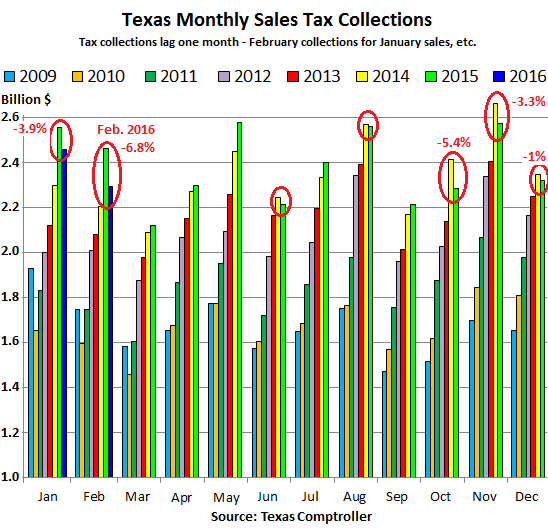 So all protestations to the contrary, consumers, once hell-bent on spending with all their might to get Texas through this, are putting their credit cards away. That they have done it for five months in a row, and that sales tax collections plunged 6.8% in February, the worst year-over-year plunge since March 2010, shows that the “negative ripple effects,” as Kaplan had called the phenomenon, are now coalescing into a toxic mix for them.

Surely, many folks in Dallas are still feeling the boom, and they’re wondering what all the fuss is about in Houston, as they’re bidding up homes to flip them and make an instant ton of money. And Austin might still be exuberant, but some of its startup juice has started to dry up, as in Silicon Valley and elsewhere, and every city has its own dynamics.

But on average, so to speak, Texas consumers are now getting hit by the “negative ripple effects” from the oil bust, the manufacturing recession, and the suddenly weakening service sector. Texas isn’t alone in this.

As layoffs of well-paid workers cascade through the Texas economy, consumers are beginning to sing the retail blues for the first time since the Financial Crisis. Given the magnitude of the Texas economy – it accounts for nearly 10% of US GDP – this is not a promising development for the rest of the nation.

43 comments for “Consumers in Texas Hit by “Negative Ripple Effects””