Tensions are rising in Mexico’s model economy. Chief among them is the spectacular decline of the Mexican peso, which has lost 8% percent of its value so far this year against the dollar, more than any other major currency. Since June 2014, it has shed 33% of its weight, now at 19.2 pesos to the U.S. dollar, the lowest ever.

Here is what the peso crash looks like, weekly, in terms of the value of one peso in US cents: 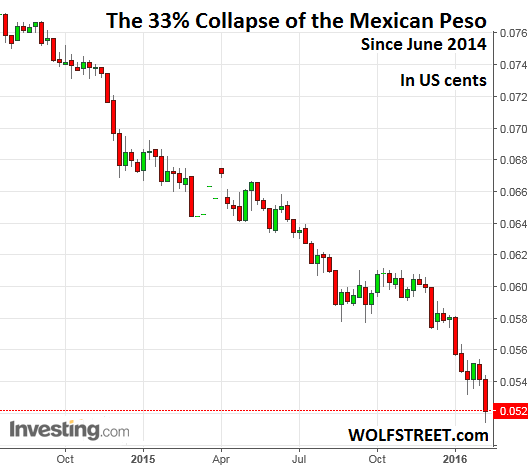 “People use hedges via the peso like Kleenex — if they think they are about to sneeze, they grab one,” Alejandro Silva, a partner at Chicago-based Silva Capital Management, told Bloomberg. “It’s a currency so liquid, so large that when big problems like Greece happen and a money manager needs to place a hedge for its portfolio, the easiest thing to do is buy dollars with their pesos.”

The Bank of Mexico has tried to stem the tide by selling a small but growing fraction of its dollar reserves in open auctions. Whenever the peso has a particularly bad day the central bank will trade some of its dollars for pesos. The amount under auction has risen inexorably, to $50 million, then to $200 million, and recently to $400 million.


According to some — including the central bank itself — the dollar auctions have helped to slow the currency’s decline. According to others, all it has done is drain some of the nation’s hard-earned and much-needed dollar reserves. They may have a point: after all, a few hundred million dollars is not even a rounding error compared to the peso’s daily trading volume of $135 billion. But after a while, it adds up.

As long as external conditions — plunging oil and commodity prices, China’s economic slowdown, the Japanese recession, and tepid growth in Europe — continue to deteriorate, it will be impossible to halt the currency’s decline, says Mexican economist Arturo Huerta González.

Over $26 billion of the nation’s reserves have been spent in recent months trying to prop up the peso — money that could have been used to increase investments, support industrial and agricultural development and generate jobs.

“Instead, that capital is now in the hands of speculators,” Huerta González says.

The problems do not stop there. Besides a plunging currency, Mexico is also beginning to witness intensifying capital flight as hot money seeks safer shores or higher U.S. interest rates. In January, overseas investors withdrew $6.173 billion from the shares of companies listed on Mexico’s benchmark index, according to the BMV. It was the biggest draw down of funds in seven months, leaving non residents holding $127.9 billion worth of variable income assets, their lowest level since September 2011.

It’s a vicious circle that, once begun, is difficult to stop. As international investors transfer their funds from emerging economies such as Mexico to the U.S. market, which offers more attractive, more secure investment conditions, the dollar becomes even more expensive, further devaluing currencies like the peso, says Huerta González. Rinse and repeat.

In Mexico the risk is particularly pronounced since its financial markets are more liberalized than most of its emerging market peers, meaning that investors can come and go at much greater ease. And right now it seems that more are going than are coming.

Not that everybody is convinced. According to Luis Robles Miaja, the president of the Association of Mexican Banks (ABM), capital is not leaving the country at all. In fact, everything is just fine. “The country is not suffering,” he said. “There has been no capital flight whatsoever, nothing has left the country,” he pressed on. “Not only that, capital has continued flowing inward.”

Thanks to the peso’s flexible exchange rate and the Bank of Mexico’s orthodox monetary policy, the external shocks have been minimized, Robles Miaja said. “As a result the falling peso has not led to rising prices, despite the fact that this has been going on for months.”

Not exactly true. While Mexico’s inflation rate may pale in comparison with Venezuela’s (180% or more), Argentina’s (27%) and Brazil’s (10.7%), it is gathering steam. Consumer prices increased 2.6% percent year-on-year in January, after a 2.1% increase the previous month. It was the highest reading since July of 2015, as the cost of food rose 3.8%.

Most worrisome, the country’s crucial staple food, tortilla, consumed by 21 million of the country’s 26 million families, has experienced particularly sharp price increases, with some states registering price rises of as much as 60% last year. According to Antonio de la Torre, the director of the National Union of Corn Mills and Tortillerias, the price increase had nothing to do with supplyside conditions and everything to do with the weaker peso.

The last time the price of tortilla rose so fast, in 2006, it led to food riots. At its climax, prices reached as high as 10 pesos per kilogram, before temporary price controls kicked in. In the last 10 years average prices have soared by over 90% and now are as high as 16 pesos in some regions. They are expected to reach 18 pesos in the coming months. In a country with an absolute poverty rate of over 50% — and rising — this should be cause for serious concern, not denial. By Don Quijones, Raging Bull-Shit.