All eyes are on Chesapeake.

The price of natural gas in the US has gotten completely destroyed. The process started in July 2008, at over $13 per million Btu and continues through today, at $1.77 per million Btu.

In between, natural gas traded at prices that, for much of the time, didn’t allow drillers to recoup their investments, leading to permanently cash-flow negative operations, and now huge write-offs and losses, defaults, restructurings, and bankruptcies.

You’d think that this sort of financial misery would have caused investors to turn off the spigot, and for production to fall because drillers ran out of money before it got that far.

But no. Over the years, money kept flowing into the industry. In this Fed-designed world of zero interest rate policies, when risks no longer mattered, drillers were able to borrow new money from banks and bondholders and drill that money into the ground, and production soared, and more money poured into the industry based on Wall Street hoopla about this soaring production, and this money too has disappeared.

In the process, the US has become the largest natural gas producer in the world – and the place where the most money ever was destroyed drilling for natural gas.

But now the spigot is being turned off. And much of the industry is heading toward default and bankruptcy. Granted, the largest producer in the US, Exxon, has apparently bigger problems on its global worry list than the misery in US natural gas. Its stock is down only 25% since June 2014, and its credit rating is still AAA. But even if it gets downgraded a couple of notches, Exxon can still borrow new money to fund its operations, dividends, and stock buybacks, and service its existing debt.

But the rest of the industry – along with its investors and banks – is sinking deeper into fiasco.

A number of smaller natural-gas focused drillers have already sought refuge in bankruptcy court. The number 2 driller, Chesapeake, which gets 72% of its production from natural gas and 11% from natural gas liquids, has already written off $15.4 billion over the past three quarters! It’s currently trying to “restructure” its debt. Nearly $12 billion of it is junk bonds. Of them, $9.3 billion are unsecured. It has hired restructuring advisors Evercore Partners.

Unsecured bondholders know what that means: their illusions will disappear. And they’re sweating blood.

Investors that stuck it out – or speculators that grabbed the opportunity of lifetime a few months ago – are toast!

Adjusted for inflation – math by the Wall Street Journal – the price of natural gas has fallen off the NYMEX charts, which date back to 1990.

This weekly chart shows the collapse of natural gas from the already deadly low price prevailing around June 2014: 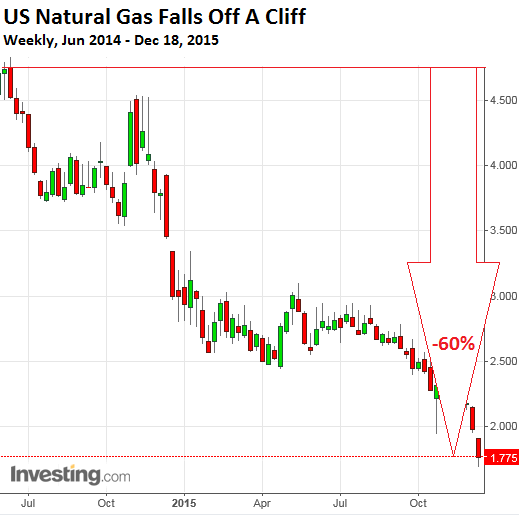 In the winter, when natural gas is used for heating, the price tends to follow the weather, and now it’s balmy in much of the US, impacted by a strong El Niño. This comes after another year of record production that pushed storage levels at the beginning of heating season to new records, according to the EIA: 16% above last year and 9% above the five-year average. As this warm weather is expected to continue, the draw on storage might only be a fraction of normal for the near future.

Beyond heating? Throughout the year, demand for natural gas was up, largely on the soaring demand from power generators that have switched to gas from coal. Some of it was temporary as power generators with both gas and coal-fired power plants took advantage of the low price of gas. But some of it was permanent, as older, inefficient coal power plants that were too expensive to upgrade and retrofit were retired. Over the first nine months of the year, based on EIA data, power burn soared 18.5%.

And natural gas exports via pipeline to Mexico have soared after new pipelines started coming on line last year. For example in September, the latest month available, pipeline exports to Mexico jumped 40% year over year.

But it wasn’t enough to overcome soaring production. Given the ongoing carnage in the industry, production finally appears to be declining, but just barely. In September, production fell 0.6% from August. But August was an all-time record. And production in September was still 6% higher than a year ago.

Even as production may have dropped further in October and November, a grim reality remains: warm weather and record stockpiles. It leaves drillers in a world of hurt. They would need a miracle, a series of horrendous arctic cold waves that last into early spring and go all the way down to Florida and Texas. It might cause a price spike that would allow drillers to hedge at least some of their production at higher prices. But that miracle seems unlikely at the moment.

After eight trading days in a row of plunging, natural gas rallied 3.6% early Thursday, only to re-plunge and end the day down 2%. During those nine days, the price plummeted 20%. And today, not even a technical bounce gained much traction before giving up its ghost, with the price in late trading at $1.765 per MM Btu, up a measly 0.5%. Not even a technical bounce can be made to stick.

This carnage among investors in natural gas, oil, and other commodities is a consequence of the Fed’s strategy to flood the world with free money. It corrupted the way financial decisions are being made. And now, much of these investments have been shuffled off to folks who hold them in their mutual funds, retirement funds, pension funds, and the like, and they’re taking a licking, even worse than savers have had to endure for over seven years.