They desperately want to raise rates, but….

What will the Fed do during the next few months? They might not know either. But we can read between the lines to see their thinking, such as we see with this speech by Atlanta Fed President Dennis Lockhart: “Assessing Economic Conditions for Liftoff,” in which he shares his analysis of the US economy. It contains several real gems:

I’ll start with the economic top line, so to speak. That is growth of gross domestic product, or GDP. Real GDP is estimated to have grown at a 2.1% annual pace in the third quarter. Excluding weakness in the export sector as well as inventory reductions, the component of GDP called real final domestic demand rose at an annual rate of 2.9%. … All things considered, I think a moderate pace of growth should be sustainable.

This is daft in several ways.

First, the trend in real GDP. Any signs of liftoff? Looking ahead, the Atlanta Fed’s GDPnow model forecasts +1.9% growth for Q4 — still in the trend, no signs of acceleration: 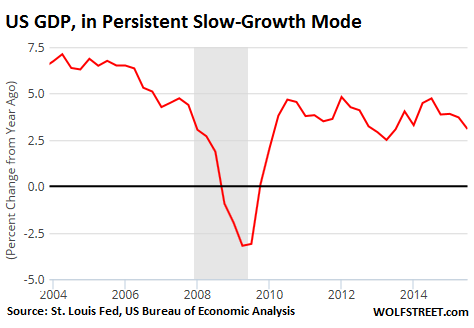 Second, GDP is strong only if one ignores the weaknesses — like exports and inventory reductions. But we should expect the export numbers to continue to deteriorate, as the US dollar has risen and the economies of our major trading partners have weakened [US Exports & Manufacturing Debacle Covered up by Oil]. 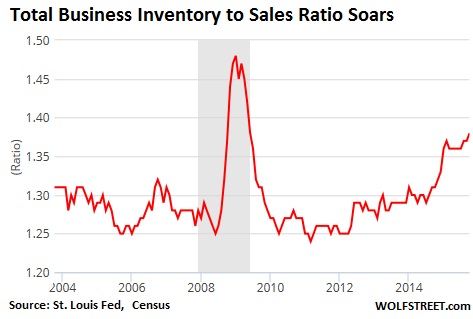 Third, GDP is a lagging indicator. Relying on GDP to steer the economy is driving while watching the rear-view mirror. Later he looks at a second indicator.

Let me turn now to employment. … a run of strong numbers for an extended period of time — like the average gain of 234,000 jobs per month we’ve experienced the past two years — gives me substantial confidence that the employment growth trend is for real … In my opinion, the Committee’s criterion {set March 2015} of “further improvement in labor markets” has been met. And further “further improvement” is certainly attainable.

This is not as odd at is sounds. Although employment is considered a lagging indicator, it began declining well before the past three recessions. But as with his remarks about GDP, the numbers do not closely match the picture Lockhart paints. Although non-farm payrolls still rise, their rate of growth (year-over-year) peaked in February and has fallen steadily since then. 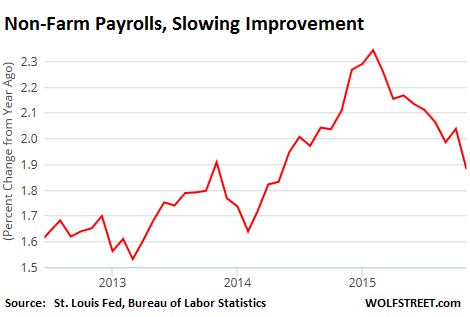 There are broader ways to measure the health of the job market, including the Fed’s Labor Markets Conditions Index, based on 19 seasonally adjusted indicators. The following graph shows the monthly change: slowing, like so many other indicators, since December 2014 — and stalled in November, and approaching the -0.8 drop in March, when the Fed set its conditions for a rate increase: 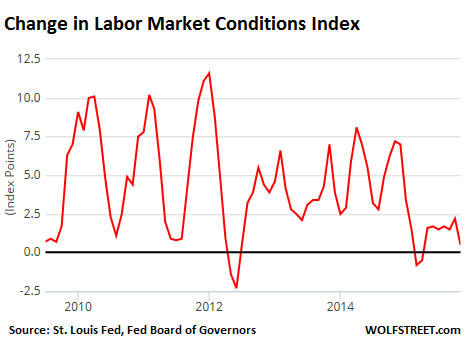 Lockhart turns to another employment indicator.

I think the economy is closing in on full employment. As we approach that condition, I would expect to see confirming evidence that labor markets have tightened up. Such evidence might come in the form of wage growth. The trend in wage growth has been weak for some time, but it may be picking up. In October, average hourly earnings increased at a 4.4% annual rate, well above the postrecession trend of just over 2%.

Since the crash, economists have remained confident that the economy would rapidly return to normal growth. October’s spike  in average hourly wages (below, circled in blue) might herald the arrival of Spring, but probably not. 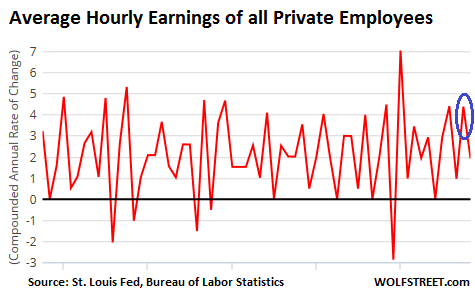 The Fed governors are intelligent and educated, backed by the Fed’s legendary corps of 500 economists. Why does Lockhart’s speech match reality so poorly? Like so much these days, it goes back to an insight of Lord Keynes in his 1936 General Theory.

Most, probably, of our decisions to do something positive … can only be taken as the result of animal spirits — a spontaneous urge to action rather than inaction, and not as the outcome of a weighted average of quantitative benefits multiplied by quantitative probabilities.

It took generations for economists to fully realize the implications of this: animal spirits can be made to order.

Presidents such as Hoover and Kennedy have used “jawboning” to influence corporations; leaders have always made brave speeches to maintain public confidence. But Central Banks can do much more by using their powers to shape our expectations and so boost the economy. Paul Krugman wrote about this in 1998, but it caught the imagination of economists after Mike Woodward’s paper at the Jackson Hole conference in 2012.

Talk became one of the Fed’s most powerful tools, especially when rates dropped to zero, rendering many of their standard tools of little use. They desperately want to raise rates, so that they’ll have some ammo to fight the next recession, which they might already need in 2016. But raising rates will further pressure an economy already in slow gear. So they talk up our confidence – dodging economic realities if needed – to minimize the impact of rising rates. By Larry Kummer, Editor of the Fabius Maximus website.

And they’ve got some challenges ahead, autos among them. They impact various parts of the economy in a big way. Read…  What Happens When the Auto-Loan Boom Blows Up

22 comments for “Why’s the Fed Talking up the (Lousy) Economy Just Now?”