Slowness of the recovery is its most amazing characteristic.

The headline number of today’s job report is the same old same old — which tells us something important: this recovery is nearing its end.

The slowness of the recovery is its most amazing characteristic. Most of the major economic indicators show this, but none more clearly than jobs and income. Here is year over year (YoY) growth in non-farm jobs during the past three cycles. 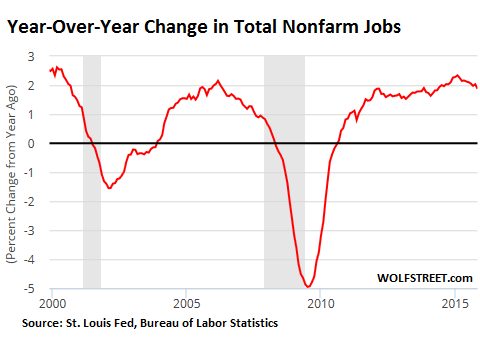 The big news in the recent employment reports has been the average weekly earnings of production and non-supervisory workers (i.e., most Americans). It grew at 1.7% YoY in November. Even with our low inflation, that’s nothing to cheer about. And it’s below the 2.3% YoY average since Dec 2007.

Economists have predicted that wage growth would accelerate soon, because they see this data, looking at growth since the December 2007 in payrolls (jobs) vs. that of the working age population (the population data is as of March). The lines will cross soon, 95+ months since the previous economic peak, showing that working age population has grown at the same rate as have jobs. This is when wage growth (wage “inflation” to CEOs and Wall Street) should begin.

This never happened in the weak recovery after the tech crash. Unlike the powerful 1990s recovery, when job growth exceeded population growth — hence the increase in wages and strong overall economy. 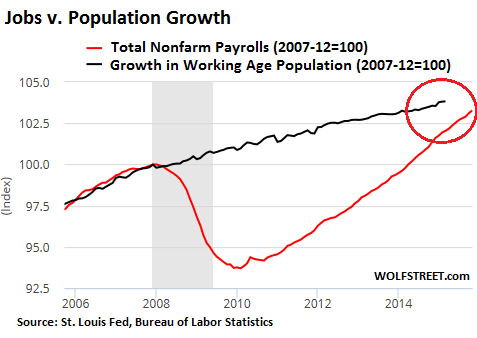 Look at this amazing chart below! The jobs data and unemployment claims say that we should be at or near full employment, with employers forced to increase wages of many workers to retain them and recruit new ones.

Instead, after February, wage growth in the private sector has slowed. Average hours worked per week has been flat since Summer 2011 at 33.7. The slump has been in growth of hourly earnings. The economy’s “animal spirits” are fading. 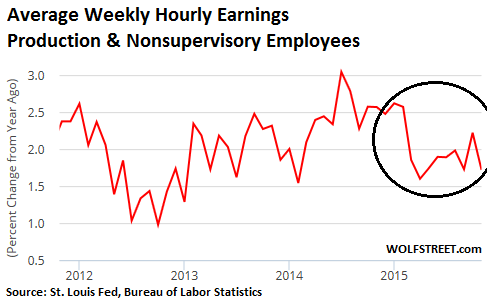 On the other hand, weekly earnings for supervisors and managers in the private sector have been rising at 3.5% – 4% for the past year!

Today’s jobs report shows that the recovery continues. But it is a lagging indicator, a look in the rear view mirror. This is why the headline number will have little effect on the Fed’s decision. Rather, they’ll look at the weak wage growth data. In our consumer-driven economy, that’s bad news.

On the other hand, the Fed Governors are desperate to normalize interest rates, which will give them ammo to fight the next recession. But coincident and leading indicators show that the economy is slowing; raising rates significantly will slow it further and perhaps start the recession. Also, raising rates significantly while most other major central banks are easing will send the already strong dollar even higher — further depressing US exports and causing more turmoil in the emerging nations.

So the Fed might increase rates in December and again over the next few months, but there will be no cycle of rising rates. The recovery’s peak is near. A recession looms ahead, perhaps in 2016.

The bottom line: The 2008 crash was not your Father’s recession. The recovery since then is unlike anything in the post-WWII era (1950-2000). That’s why so many economists’ forecasts have proven wrong. Expect the unexpected. By Larry Kummer, Editor of the Fabius Maximus website.

5 comments for “Recession Watch: Hidden Messages in the Jobs Report”