There’s a rare extreme in the oil sector right now. The oil-to-U.S. dollar ratio, which reflects the relationship between the price of oil and the dollar, is near its lowest point in almost seven years.

When this ratio hit a low in 2009, the price of oil went on to soar 214% to its peak in June 2014. But if you think this extreme means oil prices could soon rally, you’re making a mistake…

As regular readers know, the dollar has broken out over the past year. It’s now stronger than it has been since 2003 versus other major currencies. The U.S. Dollar Index is up 40% since it bottomed in 2008. Historically, when the dollar rises, commodities like oil tend to fall. This is what we’ve seen this time around. The price of benchmark West Texas Intermediate (WTI) crude oil is down more than 60% since June 2014 – to around $40 per barrel.

As a result, the ratio between the price of oil and the dollar has fallen. It’s down around 68% since oil peaked. 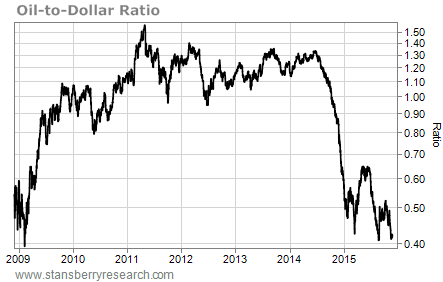 For this ratio to return to its normal level of the past few years, the dollar would have to fall significantly or oil prices would have to rise. But the above chart only tells part of the story. Take a look at this longer-term chart of the oil-to-dollar ratio:

As you can see, while the oil-to-dollar ratio is approaching a nearly seven-year low, it can fall much further. In December 1998, this ratio bottomed at 0.11. That’s more than 70% below today’s levels. Oil cost $10.72 per barrel back then.

I’m not saying oil is going to go back to those levels, but the oil-to-dollar ratio is trending lower. The last time this ratio spiked, global demand for oil exceeded supply. We aren’t seeing that today. In fact, we’re seeing the opposite. According to the International Energy Agency (IEA), the global oil supply exceeded demand by 1.6 million barrels per day in the third quarter. This oversupply is keeping oil prices low.

And the Federal Reserve is expected to raise interest rates at its December meeting. This will likely cause investors searching for yield to move into the dollar and push it higher… while pushing oil prices lower. If the ratio fell to its 1998 low, the price of oil would be at $11.40 per barrel.

Now, in the short term, we could see oil prices spike. Tensions are escalating in the Middle East. Turkey shot down a Russian warplane on the Turkey-Syria border on Tuesday. Vladimir Putin called the act a “stab in the back that will have serious consequences” for the relationship between the two countries. More fighting in this area could cause oil-supply disruptions that will lead to lower oil production… and push up prices.

But short-term events like this won’t stop the longer-term oil-to-dollar ratio downtrend. I’d consider lightening your oil and gas positions for the time being. There are likely lower oil prices ahead. By Brian Weepie, Growth Stock Wire:

OPEC’s Battle and Cheap Money. Read…  Why the Price of Oil is Doomed for Longer than Expected