Japan took fiscal and monetary policy to the outer limits. Now it’s in a recession.

Although the economic circumstances in the US and Japan differ, we’re following in Japan’s tracks – and Japan just entered a technical recession.

As Richard Koo predicted, during the Great Recession America repeated Japan’s mistakes during its “lost decade”. That’s the bad news. The good news is that America climbed into a slow recovery after the worst downturn since the 1930s. The worse news is that another recession lies ahead. Potentially a bad one, with both the world economy and many domestic sectors weak. The government will deploy powerful tools to fight this downturn. How well will they work?

Look to Japan for answers

Japan crashed in 1989 and never got up again — despite repeated massive rounds of stimulus, and during a period of rapid world real economic growth: 1990-2003 at 3.3%, 2004-07 at 5.3% (probably the fastest since the invention of agriculture). Deflation and a shrinking population cushioned the decline, but by 2005 they were getting desperate. Between 2006 and 2011 Japan had 6 prime ministers in 5 years; none of the last 4 able to remain in office a full year.

Financial and investment gurus in Japan and American were euphoric at these precedent-breaking measures. The first arrow was easily and successfully fired. The second started well, with inflation rising almost to 2% in 2014 — but has collapsing back into deflation. The third arrow remains missing in action (Abe made weak proposals in June 2014).

What were the results? A few graphs tell the tale, from a speech on Nov 11 by Yutaka Harada, Member of the Bank of Japan’s Policy Board: 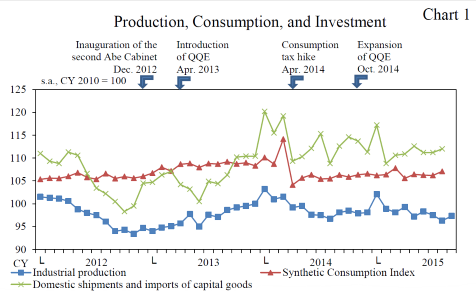 Consumption, industrial production, trade in capital goods – these sketch a picture of Japan’s prosperity. Those lines look quite flat. Do you see any changes of trend at each of the key points he helpfully marked? 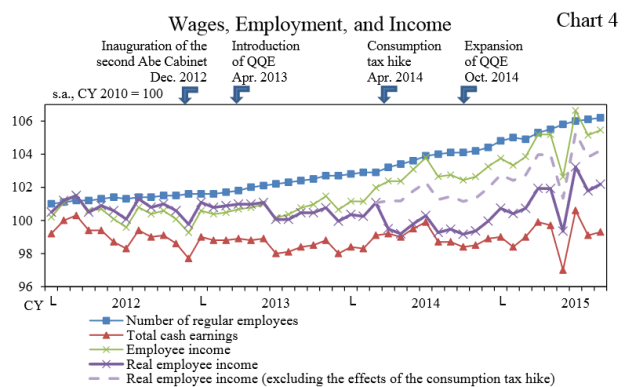 The red line is total nominal cash earnings, what we pay our bills with. It looks flat (it has been flat since 1999). However, the number of employees has grown nicely, as have corporate profits (not shown).

As for the overall economy, GDP fell in Q2 and Q3 of 2014. And this year, it dropped 0.7% in Q2 and 0.8% in Q3 (SAAR), which makes it the fifth “technical recession” (at least two quarters in a row of declines) since 2008, and the second under Abenomics. There’s no shortage of depressing charts about Japan’s economy.

Excuses abound, as they always do for bad news. But time is running out for Abe’s government. Its public approval ratings peaked in the sunny days of April 2013 at 74 Yes and 17 No. On November 10, before the GDP report, it was 51% Yes and 38% No. Weak support suggests that the window for bold policy action has closed.

Japan took fiscal and monetary policy to the outer limits, except for the ultimate step of pushing nominal interest rates below zero. The result: little or no beneficial effects, but there were bad results, such as wrecking the government’s solvency and slashing investors’ real incomes.

Public opposition prevented Abe from oft-recommended step of economist-designed, government-forced restructuring of the economy. This is why they are in a second recession under his rule, not a depression.

I expect us to follow Japan’s example in the next recession, as we did in the previous one. As before, I doubt we will have better results. By Larry Kummer, Editor of the Fabius Maximus website.

While Japan has slithered once again into a technical recession, the US is on recession watch. Read… Now Flying Below “Stall Speed”

9 comments for “What Will the US Do in a Recession? Look to Japan for Answers”