IMF boss Christine Lagarde is gung-ho about it. IMF staff is too. The Executive Board will consider it on November 30 and in all likelihood approve it. It will take effect in October 2016. Then it’s a done deal: the Chinese yuan will be added to the IMF’s currency basket, the Special Drawing Rights (SDR). A step toward becoming a major global reserve currency.

IMF staff had determined that the yuan meets the requirements of being a “freely usable” currency, Lagarde said in a statement, so a currency that is “‘widely used’ for international transactions and ‘widely traded’ in the principal foreign exchange markets.”

China also overcame other hurdles the IMF had put before it, after numerous reforms to liberalize its currency and credit markets and offer more transparency. The IMF’s Executive Board has the final say, but Lagarde will chair the meeting. And the rubber stamps are lined up on the conference room table.

Some countries, including France and Britain, have already expressed support for the change. According to Reuters, a Treasury spokesperson said the US government has always backed the yuan’s inclusion if it met the IMF’s criteria, and would “review the IMF’s paper in that light.”

The yuan has arrived – at the elite club for the biggest currency warriors: the dollar, the yen, the euro, and the pound.

China has long sought to give its currency more global weight, both as payments currency and ultimately as reserve currency, given the enormous size of its economy. By being included in the SDR, the yuan moves a big step closer, becoming more palatable for central banks to add to their foreign exchange reserves.

Currency analysts peg central-bank demand for the yuan at over $500 billion, according to Reuters. But global foreign exchange reserves have been shrinking since last year, as this chart by NBF Economics and Strategy shows: 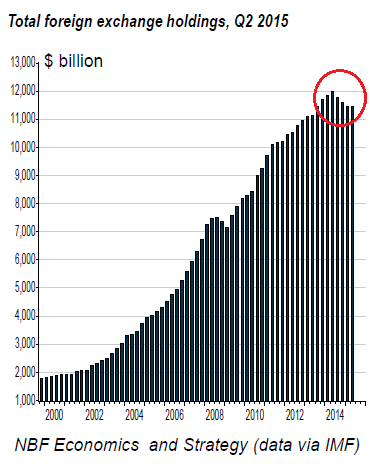 So adding yuan to those shrinking currency reserves is a zero-sum game: as yuan balances rise, central banks will lighten up on some other currencies.

Not all central banks disclose how their foreign exchange reserves are allocated. But of the 60% of the officially “allocated” reserve currencies, the distribution in Q2 was like this: 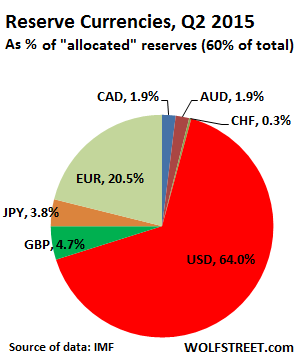 The dollar reigns supreme, and calls for the “death of the dollar” have been premature. But it has surrendered some of its dominance as a reserve currency. In the 1990s, before the arrival of the euro, it accounted for 71% of allocated reserves. In Q2, it was at 64%.

It’s the euro that is getting hammered. Currently at 20.5%, it’s down from its peak in 2009 of 27.6%. In the dreams of its inventors, it was supposed to reach parity with the dollar and become the global counterweight to US financial hegemony. That was before the debt crisis exposed what it was made of.

So when central banks start making room for the yuan, the euro, with all its problems and uncertainties, and with its still significant heft, remains the fattest sitting duck.

But the inexorable rise of the Chinese yuan as an international payments currency just had a little setback, according to SWIFT, the Belgium-based organization that is owned by banks around the globe and is the data nexus of international money transfers.

In its report for August, SWIFT had been relentlessly effusive about the rise of the yuan. It had edged out the yen to become the fourth largest payments currency for international payments by value, with a share of 2.8% of global payments – not exactly a lot, given China’s economic power. But it was up from 0.8% three years earlier. So the report gushed about the yuan’s “huge potential and staggering momentum as a major currency.”

In its report for September, SWIFT said more demurely that the yuan “fell back one place” to fifth position for international payments by value, with a share of 2.5%. It sounded a wee bit defensive about its darling-yuan having had had a hiccup:

Whether the RMB sits at position #4 or #5, what is important to note is the underlying growth of the currency, which is trending positive. Such a trend is supported by an increasing number of corporates adopting the RMB for trade settlement and a rising number of banks supporting those payments.

But it won’t significantly dent the “dollar hegemony” for a while. These things take time. The euro had tried and failed miserably. Crap happens. A debt crisis is not to be joked with. And when China’s mountain of debt implodes one way or another, the dollar might suddenly look pretty good again, assuming that the mountain of dollar-denominated debt doesn’t implode first….

China accounts for 40% of global copper demand. Without access to copper, China’s economy would grind to a halt. And you’d think with China’s official white-hot growth of 6.9%, there would be a lot of demand for copper. But no. Something is mucking up the equation. Read… What Copper Just Said about China