We watch the trend in retail sales because it shows how shocks in the US economy’s cyclical industries ripple outwards, first slowing sales growth — then pulling it down.

In April 2000 sales stalled; in March 2001 the recession began. There was no plateau before the Great Recession; sales peaked one month before the recession began. And now, according to the Commerce Department, October 2015 was the third month of flat retail sales; they’re down 1% (seasonally adjusted annual rate) since July excluding autos. Autos have been one of the strongest industries during the recovery. Excluding autos, retail sales are down year-over-year in real terms. 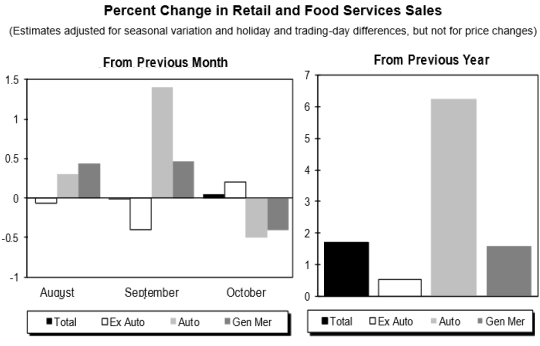 Auto sales have been a prop for the economy. They’ve been boosted by imprudent lending, with the average auto loan rising to $27,000 when the median household income of only $53,000, for an astonishing 65-month maturity — with 19.3% of auto loans going to people with subprime credit ratings.

The monthly volatility of auto sales makes trend changes difficult to see; this should be high on your list of things to watch. The inevitable crash in auto sales will be ugly, dragging down the entire economy. Automobiles have a higher multiplier effect on the economy than most retail products due to their size and complexity — consuming large amounts of raw materials and labor, requiring people to transport, sell, and finance them.

So far, as usual, the slowdown in the manufacturing sector has had only a minor effect on the economy. The goods-producing sectors employ only 14% of workers (of these only 12% work for manufacturers), while 70% work in the service sector and 15% for governments. The cyclical goods-producing sectors must slow a lot for the ripples to pull down the service industries. A fall in auto sales could provide such a push.

But not yet. Wards reports total unit sales; J. D. Powers reports average cost per vehicle sold. Both still look strong. But growing caution by either lenders or buyers could hurt sales. Bank regulators have expressed concern about subprime auto lending, especially on easy terms. As for consumers, auto sales are perhaps the largest expression of their “animal spirits” — a combination or reason and emotion vulnerable to so many things.

There are many reasons to be watching for a recession in the next year. The age and weak magnitude of the recovery are both cautionary signals. Even more significant, real gross domestic income (GDI) on a seasonally adjusted annual rate basis has not just been below the 2% “stall speed” for the past 2 quarters but below 1%, an even stronger warning sign.

In 9 out of 11 post-WWII recessions, real GDI grew at 1% or less in at least one of the four quarters prior to the recession. The last time it did so in two consecutive quarters of Q2 and Q3 of 2012, which sparked the Fed to the third and largest round of quantitative easing (QE3).

What about the expected Fed action in December, starting the long “normalization” of interest rates? The Fed is capable of almost anything, certainly increasing rates in a weak economy and few signs of rising inflation. But I suspect they will do so only once, for the same reason children don’t touch hot stoves twice. These are not normal times. By Larry Kummer, editor of Fabius Maximus

The hidden key to regime change in the stock market. Read… Corporate Profits Are the Stock Market’s Foundation. What Will Break Them?