We’re sending more kids to college, but does the economy create good jobs for them?

See this wonderful result on the graph of percentage change in jobs year-over-year, not-seasonally adjusted. Since the population grows, the percent change better shows the rate of improvement over time: 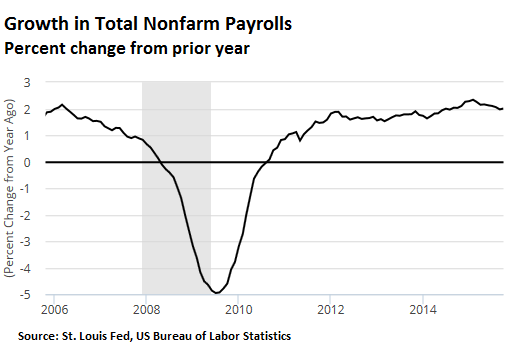 Not much change, is there?

Monthly jobs, like many economic statistics, are volatile and heavily revised afterwards. The seasonal adjustments necessary to understand the month to month changes are problematic (they’re volatile, too). But the gigantic US economy is like a supertanker: it changes direction only slowly — as seen in the trend of year-over-year numbers. A legion of economists and business journalists are paid to transform the short-term statistical noise into entertainment for readers.

Seeing the new America in the details

Where is the job growth? The answer tells us much about America. Despite claims of the growing government, their Federal, State, and local workforce has grown only 0.5% YoY (mostly from jobs in education).

We are sending more kids to college, but is the economy creating good jobs for them?

About the rush to raise rates

In a typical recovery by now the Fed would be raising rates to prevent the economy from overheating. The Fed governors, their thinking rooted in the past, clearly want to do so. But the inflation metrics show no heating (let alone over-heating), with the YoY CPI below 2% since May 2012 (excerpt for 3 months).

The October jobs report confirms the cool economy. Look at wages and hours of production and non-supervisory workers in the private sector (seasonally adjusted).

The MoM changes in earnings were impressive (+4.4% SAAR for all employees, +9.1%). But these numbers are very volatile, and the many similar pops of the past six years proved fleeting. I suggest waiting to see if this is a blip, or a trend: 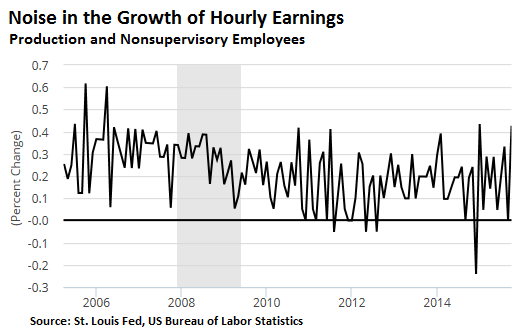 The wage numbers are important because the Fed gets excited by rising wages (aka “wage inflation”), as the Fed serves America’s corporate elites — who want to capture, not share, the gains in productivity.

About the real rate of unemployment

Measuring the complex US economy is like counting apples. Whatever the “true” and hotly disputed employment numbers are, the Bureau of Economic Statistics provides six versions. Each has its use; none is more correct than the others. And all of them have dropped during the past 6 years. 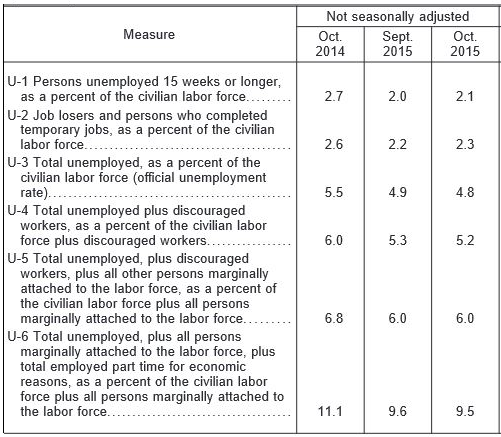 Nothing unusual happened in October. The data is consistent with other recent data showing weakness in manufacturing and commodities, but strength in the far larger service sectors. The Fed might use this report as an excuse to raise rates.

But the big picture shows a slowing economy, with the strong dollar depressing exporting industries. Unless these things change, any Fed rate increases will be small and quickly reversed if the slowing continues. So on Wednesday, Janet Yellen told a House committee that “Potentially anything – including negative interest rates – would be on the table [if the economy were to] deteriorate in a significant way.” By Larry Kummer, editor of Fabius Maximus

So, given Yellen’s admission, expect the unexpected. Read… What Will Cause the Next Recession?