Fed Chair Janet Yellen herself put a December rate hike back on the flip-flop table today. Instantly, the dollar regained additional strength. It has been rallying recently, after a rough summer when disappointing economic data hailed down on the land while the Fed flip-flopped on rate hikes. Now the theory goes that the dollar will continue to rally.

But not so fast, says a new report by Stéfane Marion and Krishen Rangasamy, economists at NBF Economics and Strategy. While the dollar may still have some upside “over the near term,” they write, it is “close to peaking.”

Numerous US companies have blamed their revenue and earnings debacles on the strong dollar. Revenues for the S&P 500 have been declining all year, a first since the Financial Crisis, and earnings are set to decline for the second quarter in a row.

US companies with global operations get hit by the strong dollar in two ways: exports come under pricing pressure and revenue and profits made in plunging foreign currencies end up on the income statement as stronger but fewer dollars.

Persistent revenue and earnings declines entail further “efficiencies,” so layoffs. We’re already getting bombarded with layoff announcements. What these companies need, after years of loading up on debt to buy back their own shares and acquire each other, is a lot of inflation and a weak dollar to make their debts appear sustainable.

The strong dollar is the moment of truth for over-indebted Corporate America. So the report:

As it turns out, earlier USD strength is proving to be more damaging to the economy than first thought. The strong greenback has not only restrained economic growth via slumping exports but also caused import prices to fall, both working to pull the inflation rate down.

Falling import prices and lower inflation are good for consumers but deadly for over-indebted Corporate America.

Betting on the strong dollar was the trade last year and early this year. But since then, currency speculators have been slashing their long positions in the dollar. And this too hammered the dollar over the summer: 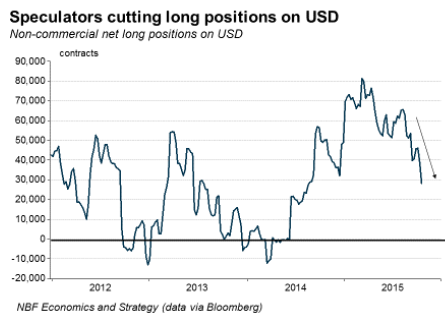 By backing away from dollar long positions, speculators have joined the rest of Wall Street in doubting the Fed’s willingness to raise rates. And that may cause the Fed to put its foot down. The report:

The Fed already has a credibility problem ─ markets are pricing in far fewer rate hikes than the FOMC says it expects over the next couple of years ─ and it will do what it can to restore its credibility. That’s why we believe the Fed will set aside concerns about low inflation and raise the fed funds rate in December for the first time in almost a decade.

And since such hike is not fully priced in, the USD has potential for further gains over the near term.

But after the Fed’s show of tepid force or whatever, the dollar would face reality. Next year, the economy will likely face additional “headwinds.” The strong dollar would continue to drag on exports. Demand in the US “could also take a breather.” The housing market is “likely to soften.” And “consumption growth could ramp down as the benefits of low pump prices fade and employment creation moderates….”

So not exactly a rosy scenario. Hence, “the upcoming tightening cycle is set to be brief,” the report says. That would spell trouble for the dollar rally.

The other pressure building up against the dollar: The IMF is likely to include the Chinese yuan in the Special Drawing Rights, a currency basket that contains the dollar, the euro, the yen, and the UK pound.

Once the yuan is part of the SDR, central banks will add yuan to their reserves. But reserves have been falling since last year, and adding another currency to the falling total would come out of the hide other reserve currencies [read… Not the “Death of the Dollar” but “Death of the Euro?”]. 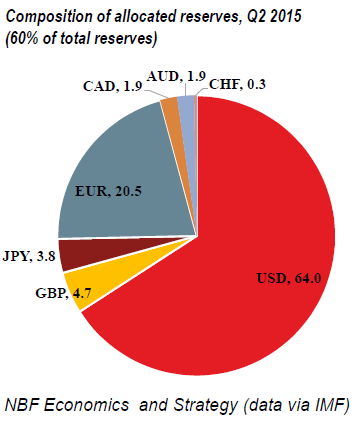 So more demand for the yuan might let some hot air out of the dollar – at least that’s what everyone is hoping. It would “arguably lower downside risks to the global economy,” the report says, given the mountain of dollar-denominated debt issued recklessly by companies and governments outside the US that didn’t want to issue this debt in their own currencies because it would have borne higher interest rates. Now that these debt sinners’ own currencies have plunged against the dollar, the math no longer works.

A weaker dollar could help them out and, as the report says, “help reduce the odds of corporate default and capital outflows in emerging economies,” and it could help prop up the “stability of the world economy.”

From that point of view, and from the point of view of Corporate America, it’s clear why bashing the dollar – and along with it, the earnings power and wealth, if any, of every American – is the way to go. And beyond the near term, the dollar bashers will likely win.

And the biggest debt sinner of them all? The US. Gross national Debt, that monster that keeps ballooning so much faster than the infamously slo-mo economy, just did something phenomenal. Read… US Gross National Debt Jumps $340 Billion in One Day

27 comments for ““Strong Dollar” Headed for the Chopping Block?”