Another $15 trillion of bottled air is waiting to be released.

If you need evidence that Wall Street is a financial time bomb waiting for ignition, look no further than the recent meltdown of Valeant Pharmaceuticals (VRX). In round terms, its market cap of $90 billion on August 5th has suddenly become the embodiment of that proverbial sucking sound to the south, having plunged by nearly two-thirds to only $34 billion by Friday’s close. 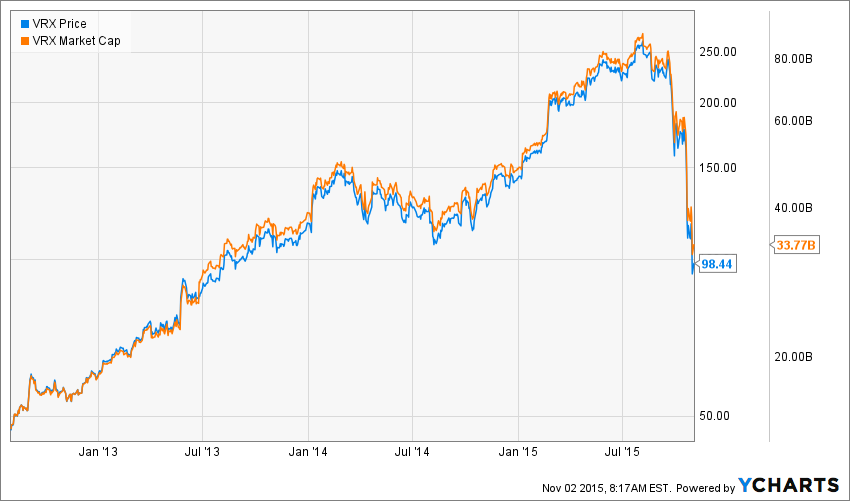 No, Valeant was not caught selling poison or torturing cats during the last 90 days. What is was doing for the past six years is aggressively pursuing every one of the financial engineering strategies that are worshipped and rewarded in the Wall Street casino.

Indeed, Valeant’s evolution during that period arose straight out of financial engineering central. That is, it was a creature of Goldman Sachs and the various dealers, underwriters, hedge funds and consulting firms which ply the Bubble Finance trade.

At the end of the day, the latter have turned the C-suites of corporate America into gambling dens by attracting, selecting and rewarding company wrecking speculators and debt-crazed buccaneers to the top corporate jobs.

In this case, the principal agent of destruction was a former M&A focussed McKinsey & Co consultant, Michael Pearson, who became CEO in 2008.

Pearson had apparently spent a career in the Dennis Kozlowski/Tyco school of corporate strategy. That is, advising clients to buy, not build; to slash staff and R&D spending, not invest; to set ridiculously ambitious “bigness” goals such as taking this tiny Canadian pharma specialist from its $800 million of sales to a goal of $20 billion practically overnight; to finance this 25X expansion with proceeds from Wall Street underwriters, not internally generated cash. He even replicated the Tyco strategy of moving the corporate HQ to Bermuda to slash its tax rate.

Pearson’s confederate in this scorched earth corporate “roll-up” enterprise was Howard Schiller, a 24-year veteran of Goldman Sachs, who became CFO in 2011, and soon completed the conversion of Valeant into a financial engineering machine.

During their tenure, Pearson and Schiller spent about $40 billion on some 150 acquisitions. At the same time, they militantly eschewed investment in drug research and development in an industry who’s very purpose is the development of new drugs and therapies.

Yet the alternative strategy they peddled to the occupants of the hedge fund hotel that became increasingly crowded with VRX punters as its shares soared skyward was downright nonsensical and economically vapid. It could only have thrived during the late stages of a Bubble Finance mania.

In essence, Pearson and Schiller claimed that the rest of the industry was infinitely stupid, and that tens of billions of market cap could be created instantly by the simple expedient of buying companies with seasoned drugs and then jacking up prices, often by orders of magnitude.

In fact, Valeant has acquired a reputation for ferociously raising prices. In one year alone the company jacked-up the price of 81% of the drugs in its portfolio by an average of 66%.

The point here is not to echo the Hillary Chorus in favor of government drug price controls. Quite the contrary. Despite a crony capitalist inspired patent regime and the endless legal obstacles thrown up by the Big Pharma cartel, the drug market is not immune to the laws of economics.

Raise the price of drugs radically enough and you will attract competitors into the market with new formulations that circumvent the patent; or get greedy enough and generics will swamp you on patent expiration.

Nor does that truth completely exempt even small volume or so-called orphan drugs. In those instances, it takes massive price gains to move the aggregate revenue needle. That is, exactly the kind of egregious increases that stir a political firestorm among users and providers and bring the Hillary brigade charging toward the TV cameras.

Accordingly, Martin Shkreli’s 5000% increase in the price of Daraprim went dark even faster than his company Twitter account.

Stated differently, what seasoned industry executives know that may have escaped the attention of 32-year Wall Street hot shots like Shkreli, or the spreadsheet jockeys who congregate in the hedge fund hotels, is that massive, wanton, overnight price escalation is not a business strategy that builds sustainable value and reinforces brand equity; it’s a scalping tactic that works in the casino, but not the real world.

At the same time, Pearson and Schiller slashed staff and chopped down R&D spending to a comically low 3% of sales. That compares to an industry norm of 12% to 18%.

Finally, this Wall Street witches brew was stirred together in pro forma financials that assumed these predatory price hikes would be permanent and that these back-of-the-envelope cost savings would be immediately realized in full.

The resulting profit projections, of course, had virtually nothing to do with the company’s actual results, but they did conform to sell-side hockey sticks like a hand-in-glove.

As the New York Times noted in an piece over the weekend:

Looking at Valeant’s real earnings compared with its make-believe ones exposes an enormous gulf. Under generally accepted accounting principles, the company earned $912.2 million in 2014. But Valeant’s preferred calculation showed “cash” earnings of $2.85 billion last year. That gap is far wider than at other pharmaceutical companies presenting adjusted figures.

Needless to say, it did not take long to turn Valeant into a veritable debt-mule. Its debt outstanding rose from $400 million in 2009 to $31 billion at present, and that’s the rub.

To wit, Valeant has been a veritable cash burning machine during its Wall Street driven M&A spree. So it has no possibility of making ends meet under a continuation of the maniacal M&A campaign crafted by the Wall Street wise guys.

Indeed, its demise is a near certainty. On the one hand, it was destined to blow-up if it kept “growing” via debt-fueled M&A. Contrariwise, its peak stock market value at 100X GAAP earnings was destined to implode if it stopped doing deals and triggered a mass exodus by the punters who inhabited VRX’s hedge fund hotel.

It goes without saying, of course, that these Bubble Finance deformations have resulted from the lunatic cheap money and wealth effects levitation policies of the Fed. Financial repression and QE deeply subsidize corporate borrowing to fund financial engineering deals, thereby reducing the after-tax cost of even sub-investment grade debt to low single digit levels.

Likewise, ZIRP is the mother’s milk of Wall Street speculation. It enables hedge funds and other fast money traders to build-up positions in rocket ships like Valeant at virtually no cost through the options and dealer financing markets.

Indeed, as VRX’s market cap grew from $14 billion to $90 billion in just 36 months, it generated a daisy chain of rising “collateral” value that enabled leveraged speculators to chase its stock to an ever more absurd height relative to the company’s GAAP financials.

During the 12 months ending in September, for example, VRX  generated only $2.54 billion of operating cash flow, but spent $14.3 billion of cash on CapEx, M&A deals and other investments.

Nor was that an aberration. During the 27 quarters since the end of 2008, VRX has generated a mere $7 billion in operating cash flow, but has consumed nearly $26 billion of cash on investments and deals. Stated differently, it was a Wall Street Ponzi pure and simple.

Likewise, during that 27 quarter period, which roughly tracks Pearson’s tenure, the company has posted rapidly rising sales, with the top line growing from $757 million in 2008 to $10 billion in its most recent LTM report.

But it has been an absolutely profitless prosperity – not unlike the typical financial engineering driven roll-up. Thus, over this 27 quarter period as a whole, sales totaled just under $30 billion, but its cumulative net income amounted to a miniscule $130 million.

That’s right. Valeant’s market cap soared from $1.2 billion when Pearson arrived in 2008 to the recent peak of $90 billion – even though the company has generated hardly a dime of profits on his watch. Its all been pro forma, ex-items forward looking Wall Street hockey sticks, and not the least those published by Goldman Sachs.

Yet there is no mystery why these financial engineering scams happen over and again in financial markets which have been corrupted and disabled by the Fed and other central banks.

Namely, because the deal fees from financial engineering are so lucrative; and because the checks and balances of a healthy free market in finance – such as short-sellers, heavy hedging expense and meaningful carry costs for debt financed speculations – have been destroyed by the central banks.

Thus, a few years ago Valeant’s predecessor company was a backwater player on the Toronto stock exchange, but in the last three years it has become the fifth largest payer of investment banker fees on Wall Street.

In fact, thanks to its rapid acquisition-driven and debt-financed expansion Valeant’s investment banking fees have totaled $500 million since 2012. This means that only General Electric Co, Allergan Plc., AT&T Inc. and Dell Inc have paid more, according to data from Freeman and Co.

Needless to say, financial engineering scams like Tyco and Valeant would never happen in an honest free market. Short sellers would shut them down long before they reach egregious levels of over-valuation; and the cost of honest downside market insurance (i.e. S&P 500 puts) and market driven carry cost would dramatically reduce the profitability of speculation and the amount of punters and capital in the casino.

In today’s broken markets and corrupt regime of central bank driven crony capitalism, however, bubbles inflate in individual securities, as well as in broad sectors (e.g. biotech, social media and junk bonds) and the market as a whole, until they reach egregious, self-correcting extremes. Then they implode, creating immense waves of collateral damage in the process.

Recall that Tyco’s market cap dropped from $125 billion to $25 billion during just the final six months before Kozlowski was finally forced out in June 2002. Likewise, during the last 90 days nearly $250 billion has evaporated from the 150 companies in the NADAQ biotech index.

Viewed in the larger context, therefore, Valeant’s $55 billion implosion in recent weeks is just a preliminary tremor. On a worldwide basis, the mother of all financial bubbles is just beginning to fracture.

Accordingly, in the US alone there is probably another $15 trillion of bottled air waiting to be released. Perhaps then, the American people will learn that Yellen & Co have actually been in the un-wealth effects business for way too long. By David Stockman, David Stockman’s Contra Corner

Short-selling is a thankless way of trying to make a buck. Short sellers are maligned and hounded. But in the pharmaceutical sector, they’re ironically benefitting consumers, taxpayers, and investors. Read… Short Sellers Lower Boom on Wall-Street Hype, Big Pharma