The party lasted for years. Now the sector is expensive.

By Brian Hunt and Ben Morris, The Growth Stock Wire

It’s one of the most exciting sectors in the entire market. It’s a sector capable of producing gigantic gains. And we wouldn’t touch it with a 100-foot pole.

In today’s essay, we discuss a sector that is very popular with investors right now… and reach a conclusion that could save you a ton of money over the coming years.

Longtime readers know we pay close attention to the biotechnology sector. It’s one of the market’s greatest “boom and bust” sectors. With its promise of individualized medicine, cancer cures, and miracle drugs, the biotech sector easily draws lots of attention and speculative money flows. Get in early on the booms, avoid the busts, and you can make great money in biotech. 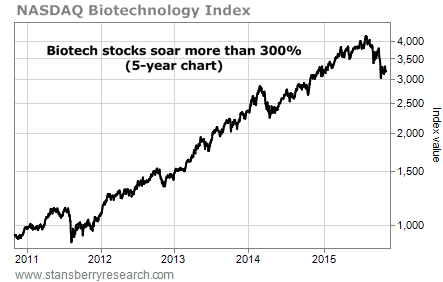 Our DailyWealth Trader readers profited from this uptrend. During 2012 and 2013, we traded the sector for a handful of double-digit gains, including a six-month gain of 58%. But after drawing a tremendous amount of interest and billions of dollars of investor cash, the biotech sector as a group is too expensive to get a dollar of our money.

Analyzing the valuation of the biotech sector is a little different than most sectors. Many biotech firms don’t have any earnings. This is why we don’t use the common “price-to-earnings” ratio to gauge biotech stock valuations. We use the “price-to-sales” ratio (P/S) to gauge valuations. (If a company sells $1 billion worth of goods in a year and the market value is $10 billion, that’s a P/S of 10.). 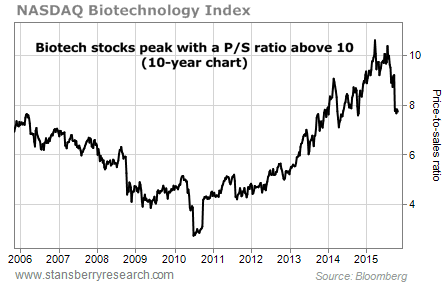 We can also study the valuations that biotech companies pay to acquire other biotech and pharmaceutical companies. In this next chart, we limited our analysis to only companies that had positive earnings when they were acquired. The chart shows the median price-to-EBITDA (earnings before interest, taxes, depreciation, and amortization) multiple paid. A low multiple is “cheap” relative to a higher multiple.

So far in 2015, companies have paid more to acquire biotech and pharmaceutical companies than at any time in the prior 20 years. In part, this is the effect of low borrowing costs in our “zero-percent” world. Whatever the cause, it’s a clear indicator that the sector is very expensive. 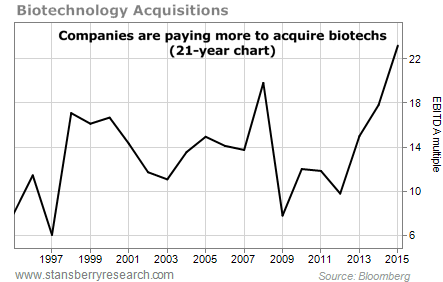 Both this and the price-to-sales ratio are saying, “steer clear of biotech.” Valuations are rich after the huge mid-2011 to mid-2015 run… And the potential risk in biotech stocks is now much greater than the potential reward.

Could the biotech sector move past its 2015 high and kick off a new bull market? Sure. Anything is possible. But given that the sector already soared 300%, stacking another bull market on top of the previous bull market would be like building a skyscraper on top of a skyscraper.

The biotech party lasted for years. Now the sector is expensive. We’re sure some individual biotech firms will find breakthroughs and do very well over the coming years, but as for the overall sector… No thanks. By Brian Hunt and Ben Morris, The Growth Stock Wire

4 comments for “Do You Own This Popular, But Dangerous, Investment?”