“It’s been a rotten year for distressed and defaulted loan paper.” That’s how S&P Capital IQ LCD starts out its report on leveraged loans.

“Rotten” may be a euphemism. So far, 2015 has been the worst year for defaulted “leveraged loans” since 2008 when the US financial system imploded under its own excesses.

Leveraged loans are the loan-equivalent to junk bonds. They’re issued by junk-rated over-indebted companies often to fund M&A – such as the loans issued by junk-rated, over-indebted Valeant – or to pay a special dividend to the private equity firms that own the companies, which is a form of financial strip-mining. They’re an $800-billion market and trade like securities. But the SEC, which regulates securities, considers them loans and doesn’t regulate them. No one regulates them. This gives issuers and banks a lot of leeway.

Leveraged loans are too risky for banks to keep on their balance sheet. Instead, they sell them to loan mutual funds or ETFs so that they can be moved into conservative retirement portfolios, or they repackage them into Collateralized Loan Obligations (CLO) to sell them to institutional investors, such as mutual-fund companies.

But banks can get stuck with them when markets come out of their euphoria, as they did during the Financial Crisis. So the Fed and other regulators have been exhorting banks for two years to back off. With some success: issuance has started to decline.

The “reach for yield” over the past few years, in an environment where the Fed’s zero-interest-rate policies have repressed yield, has turned investors into blind daredevils, taking on huge risks for ludicrously low returns. This allowed companies to issue leveraged loans at very low interest rates and as “covenant-lite,” with few of the protections that investors demand during saner times.

Even the Fed has fretted about “reach for yield” in numerous statements. It’s one of the most efficient wealth transfer mechanisms known to mankind. Wall Street knows exactly how to use it.

So far, default rates of leverage loans are below trend. And normally when they do default, leveraged loans, which are secured, tend to hold up well in a restructuring or bankruptcy where unsecured bonds might get annihilated. Thus, the annual returns of defaulted loans, as tracked by S&P Capital IQ LCD are usually positive, and can be very high after down-years, with 2009 and 2012 producing returns of over 20%. From 2001 through 2014, defaulted leveraged loans produced losses only in 2008 and 2011. Then came 2015.

This chart of the S&P/LSTA Index tracks the annual returns of performing leveraged loans (red bars) which are up a measly 2.4% year-to-date, and the defaulted loans (blue bars) which have collapsed 33.6% – the worst loss since 2008: 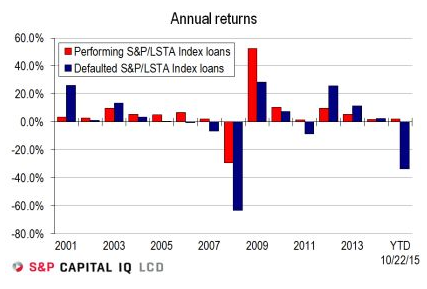 “Fear has become a strong undercurrent in today’s leveraged finance markets,” the report explains. It outlines the reasons:

First, troubles across the Energy, Metals/Mining, and Pharmaceuticals sectors – along with a spate of news-driven declines in such names as Millennium Health, NewPage, and Getty Images – have shaken investor confidence.

Second, there is a clear sense among buyers that America’s economic recovery, which has now run for six fitful years, is likely closer to the end than the beginning.

Third, CLO investors are growing concerned about maxing out CCC baskets [the lowest-rated and riskiest slice of CLOs], which are typically set at 7.5%; that compares to today’s CCC concentration of 5.98% across the S&P/LSTA Index.

Institutional investors that buy these loans have woken up and are suddenly “micro-managing” and “delving deep into portfolios and asking hard questions about specific names and sectors,” the report says.

Which is what they should have done in past years but hadn’t because the Fed’s monetary policies put blinders on them, and they were reaching for yield, no matter what the risks. And so now there is a “flight to quality,” though not yet “on par with 2008 and 2009.” Investors want “cleaner portfolios built to withstand a downturn.”

That may be hard to get. So they’re “selling paper more aggressively on bad headlines and downgrades than they have recently.” This generates the crisis-like chasm between defaulted and performing leveraged loans:

Whether this will prove a compelling buying opportunity, or foreshadow a further leg down or a full-blown default cycle, only time will tell. For now, though, caution is clearly today’s watchword.

During the Financial Crisis, leveraged loans cleaned out investors and did tremendous damage to banks, which got stuck with them as issuers defaulted. Without the Fed’s multi-trillion dollar bailout of the banks and other major players, these loans would have contributed to the collapse of some of those banks, and the defaulted loans wouldn’t have bounced back so forcefully in 2009.

Ironically, the Fed’s infinitely wise policies since then have created a new boom in leveraged loans, based on the old banker adage: Bad deals are made in good times. And that boom is now beginning to unwind once again, starting as always at the bottom.

And Moody’s has its own concerns, suddenly, “though it’s premature to predict impending doom for the current recovery,” it says to assuage our rattled nerves. Read… This Is Why It’s Going to Get Even Tougher