The Government’s strange and awesome powers

By Larry Kummer, Editor of the Fabius Maximus website:

Six years after the recession ended, we are due for another recession. Many experts say that the government is “out of bullets” to fight the next severe downturn. That’s quite false because 2008 marked the start of a new era in which our leaders manage the business cycles using strange and awesome tools. We’ll learn the long-term effects of these tools slowly, probably only decades later.

“All is not lost until you run out of airspeed, altitude, and ideas.” — Pilots’ wisdom.

Expect the next recession

Free market economic systems produce greater growth than any other system yet tried. Business cycles — and recessions — are a price we pay for the growth. They’re unpredictable, literally so: the consensus of economists has never predicted one. They can destroy years of growth, and change the course of nations. The 2008 crash did both, as shown by this slide from a typically excellent analysis by Brad DeLong. 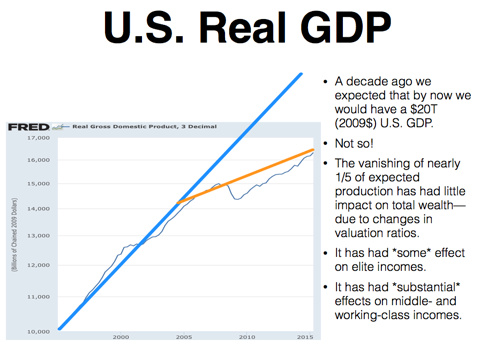 Six years of slow growth have not restored the US to the vigorous health desirable before a recession, especially since we seldom see the weakness before a downturn cracks them open (e.g., the good news in 2007 was that our banks were in the strongest condition ever before a recession). The Fed’s economists have slowly abandoned hopes for a fast recovery; they now foresee continued slow growth.

Another recession could arrive soon and get ugly, fast — as many of the world major financial institutions have warned, including the IMF. We should consider what that means, since this is the 4th longest expansion since WWII, now 75 months long. And we’re due for another one.

What can the government do during a severe recession to shorten its duration and minimize its magnitude? Many people believe the “Fed is out of bullets”. They’re very wrong. A new era began with the 2008 crash, giving the government and the Fed strange and awesome powers.

“… the U.S. government has a technology, called a printing press (or, today, its electronic equivalent), that allows it to produce as many U.S. dollars as it wishes at essentially no cost.” — Ben Benanke, speech in November 2002.

On 16 December 2008 the Federal Reserve lowered their target rate for Federal Funds to 0 – 0.25%. The US Treasury just issued three-month Treasury Bills, for the first time ever at a yield of zero. After seven years of running a zero interest rate policy (ZIRP) bolder steps will be needed.

Another tool is quantitative easing (QE). Long experience in the US, Europe, and Japan has proven its value during a crisis. To push down the rates of other securities, starting in 2008 the Fed (and Treasury) made large scale purchases of Treasury and government-guaranteed securities. The Fed also purchased Commercial Paper (short-term corporate debt). These programs proved quite effective during the 2008 crisis, at no net cost, the Fed claims, though they wiped out income streams of savers and caused all kinds of other distortions.

Subsequent rounds (QE2, QE3) proved far less effective. Expect the Fed to do more QE during the next recession — on an even larger scale, if necessary. There are no obvious limits to this tool. As Bernanke explained in that 2002 speech …

Therefore a second policy option, complementary to operating in the markets for Treasury and agency debt, would be for the Fed to offer fixed-term loans to banks at low or zero interest, with a wide range of private assets (including, among others, corporate bonds, commercial paper, bank loans, and mortgages) deemed eligible as collateral. … the Fed {also} has the authority to buy foreign government debt …

The only monetary tool that remains unused by the US is lowering rates below zero. There are precedents for charging (rather than paying) interest on bank deposits. Among them:

These are just toe-in-the-water steps to negative interest rates compared to what I expect to see during the next recession, much as early examples of quantitative easing were dwarfed by what major central banks have done since the crash — with consequences impossible to foresee.

Guarantee much; buy the rest

Since 1873 Central Banks have followed Bagehot’s Rule when acting as the lender of last resort: lend freely at a high rate of interest on good securities. During the crash the Fed wrote a new rule: “privatize profits, socialize risks.”

The government nationalized Fannie Mae and Freddie Mac to prevent their bankruptcy (as investors expected, but government officials had long claimed that would not happen).

In order to protect the profits of Goldman Sachs, the government nationalized the AIG holding company. Very different treatment than that given to Goldman and Morgan Stanley, as The Wall Street Journal pointed out:

Key decision makers at the Fed and Treasury arbitrarily determined which companies should become wards of the federal government (AIG) and which should be permitted to live on (Goldman Sachs and Morgan Stanley). Goldman Sachs was permitted to live by enjoying markedly lower interest rates and access to credit facilities amounting over time to approximately $600 billion.

And it was probably illegal.

The scope for the government and the central bank guaranteeing and buying financial assets during a crisis is almost unlimited, assuming Congress is sufficiently panicked to agree. Insiders will reap vast fortunes, as they did from the previous crash.

During the crash Wall Street exerted their political power, and Congress moved to protect their patrons. In September 2008 and October 2008 the SEC and the Financial Standards Accounting Board (FASB) in effect suspended Statement of Financial Accounting Standard No. 157 — “Fair Value Measurements”, which “defines fair value, establishes a framework for measuring fair value in U.S. generally accepted accounting principles (“GAAP”), and requires expanded disclosures about fair value measurements”. On 2 April 2009, FASB did so more decisively.

This allowed banks the freedom to value assets at will and avoid disclosing that some had negative net worth. John Hussman believes that these were the most effective — and the most precedent-breaking — measures taken during the crash. Reliable accounting standards provide the information on which free markets rely. Suspending them (in concert with other measures, described below) created the managed markets government and industry leaders desire during a crisis.

The SEC staff later issued a white paper pouring whitewash on their actions.

History shows that fiscal policy (deficit spending) is one of the most effective tools to fight a downturn.

The US government had no difficulty financing deficits. The US government’s public debt remains relatively low as a percent of GDP compared to its peers, so there’s no reason to expect that to change during a crisis — as a “flight to safety” provides more buyers for Treasury securities. If managing the debt becomes a problem in the future, the Bank of Japan and other central banks have proven that they can monetize government debt with no obvious limits (i.e., they can print money to buy government debt).

We can expect government spending to set new records during the next severe downturn. Who knows, perhaps we’ll use the recession as an opportunity to repair our rotting infrastructure.

During the great recession, the government took actions with few precedents in the kinds of measures used — and no precedents in their scale. During the next severe downturn we can expect many of these actions to be repeated, even in a much smaller crisis.

Investors know this, even if only implicitly — which is why valuations of many risk assets are high by historical standards. They believe the government has put a safety net not just under the economy, but under asset prices as well (chopping off the left tail of the bell curve). They will be correct until the day comes when this policy either changes or catastrophically breaks.

This momentous change in our government’s management of the economy occurred without long thought, without serious analysis, and without public discussion. It served, above all, the interests of a financial sector that has grown to dominate the US economy — generating vast fortunes for speculators and the upper tier of the sector’s workers (especially the senior executives). For America, the benefits of the financial sector’s growth and security are probably zero, or less.

We can only guess how this all will end. The essential thing to know is that we have begun a new era. Expect the unexpected. By Larry Kummer, Editor of the Fabius Maximus website.

And what might spark a crisis? Read… US Economy Flies into “Coffin Corner,” But We Don’t Mind!

32 comments for “And What’s Going to Happen at the Next Recession?”