Fitch Ratings is fretting about junk-bond defaults. “After five issuer defaults already this month accounting for nearly $2 billion in new volume,” Fitch now expects that the default rate will hit 3.5% by year-end, up from 2.5% to 3% a few days ago. Through September, the trailing 12-month default rate was already 2.9%.

The energy and metals & mining sectors are getting there: in September, their default rates were 5% and 10% respectively. Fitch: “These sectors experienced three consecutive months with over $4 billion in defaults, a level not seen since 2009 when monthly volume in the entire market exceeded $4 billion for seven straight months.”

There is a period before default when investors are picking up on the troubles the company is having and demand higher yields in return for taking on the risks. Debt is considered “distressed,” when the spread between its yield and the yield of US Treasuries surpasses 10 percentage points.

The toxic miasma of “distressed debt” is engulfing more and more junk bonds and leveraged loans. Back on September 24, Standard & Poor’s announced that the “distress ratio” for junk bonds, after rising since late last year, had hit 15.7%. It was the worst level since December 2011. It was terrible. But now, the distress ratio for junk bonds has soared to 21%.

This chart from LCD HY Weekly shows the distress ratio of junk bonds (red line) and of leveraged loans (blue line). Leveraged loans are generally secured by collateral and hold up better in bankruptcy than bonds, so their yields remain lower even if unsecured bondholders are headed for a total wipeout. Now the distress levels of both are soaring: 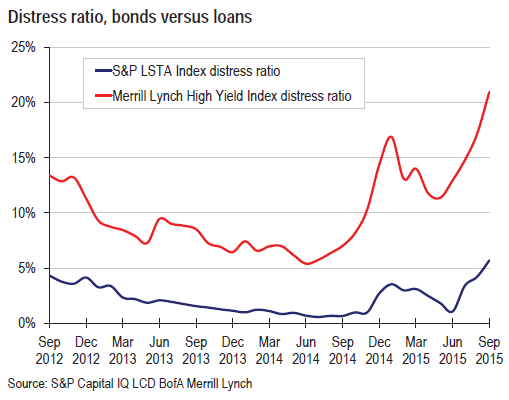 Two weeks ago, no new junk bonds were issued at all. The sole daredevil to even try, bearings manufacturer NN Inc., withdrew its offering because it couldn’t live with the yields investors demanded. S&P Capital IQ LCD described it this way:

Indeed, aside from holiday weeks and the unofficial breaks of late August and December, the new-issue market hasn’t recorded a zero US dollar supply week since the week ended February 20, 2009….

Last week, it was only slightly less terrible.

With huge media hype, Carl Icahn had earlier released his video that hammered on junk bonds. He must have been short. By Monday, the manipulative effects had worn off, and a big rally ensued. Yields fell back to where they’d been ten days earlier. And new money washed over bond funds, the first major inflow since mid-July, following relentless weekly outflows. But it wasn’t an all-clear signal. LCD:

The net inflow masks an underlying dynamic that could suggest market-timing, hedging strategies, and fast-money investors in the asset class. Indeed, the mutual fund segment was negative $675 million this past week, but it was filled in and overblown by a whopping $1.4 billion infusion to exchange-traded funds….

So there was a “bear-market rebound” early in the week. “Market participants cited short covering after the September slump,” as heavily shorted sectors, such as chemicals and energy, “notched big gains,” LCD HY Weekly reported. It was also driven by “forced buying as money flowed into the asset class.” But then it “petered out.”

So in this somewhat less terrible week, only one company was able or willing to sell new bonds: fertilizer and grass-seed specialist Scotts Miracle-Gro priced $400 million of eight-year notes (it’s also syndicating a senior secured line of credit of $1.6 billion and a term loan of $300 million). But the bonds were the first and only pricing action since September 25.

The other daredevil to try to face this market, SunOpta Foods, a supplier to the organic-foods industry, withdrew its bond offering “due to market conditions.” Pricing guidance on Tuesday had been at a 10% yield. But even that wasn’t enough to get investors interested.

Seven deals have been withdrawn from the market so far in 2015, for a total of $4.56 billion in issuance, though two of the earlier fails, Fortescue Metals and Presidio, ended up returning to the market later.

Including this meager week, year-to-date junk-bond issuance came to $225.9 billion, a 14% plunge from the same period last year.

The proceeds from junk bonds and leveraged loans are rarely invested in productive activities these days, such as adding capacity or developing new technologies. Ironically, the few sectors that were investing the proceeds in productive activities – energy and metals & mining – are in a depression and have been locked out from the junk bond market.

For the rest, junk debt is used to fund acquisitions, share buybacks, or special dividends to the company’s private equity owners (a form of financial strip-mining). But now, junk-rated companies face increasing difficulties in funding share-buybacks and M&A, two of the big powers behind inflated stock prices. Financial engineering works. But now stocks are in the process of losing that support.

It was a data set we didn’t need. Not one bit. It mauled our hopes. It mucked up our rosy scenario. Read… Last Time that Ratio Soared like this, Stocks Crashed