But what’s different this time?

Revenues of the companies in the S&P 500 have been declining all year. Companies and analysts blamed the strong dollar. They blamed China. They blamed oil, Greece, Japan, and a million other things. In the first quarter, revenues dropped 2.9% from a year earlier. In the second quarter they dropped 3.4%. And in the third quarter, according to FactSet, they’re expected to decline by 3.4%.

The last time year-over-year revenues declined two quarters in a row was in 2009 during the Financial Crisis [read… Revenue Recession Spreads past Dollar, Energy]. Now there have been three quarters in a row of revenue declines.

It’s tough out there.

Given this revenue debacle, corporate earnings growth has been shrinking. By Q2, it turned negative (-0.7%), according to FactSet. And in Q3, earnings “growth” dropped deeper into the negative, now estimated at -5.9%, despite all the expert financial engineering, share buybacks, and accounting tricks that companies have been leveraging with great skill and singular dedication.

But that bonanza is over. Companies in other countries have been struggling too, despite the strong dollar that should have been beneficial to their non-dollar financial reports. And some of the deterioration has been reflected in global share prices, which have gotten hammered, including in Japan.

The MSCI AC world index, which captures large and mid-cap stocks across 23 developed markets and 23 emerging markets, has now been dropping for two quarters in a row – worst performance in four years.

Turns out, for the companies around the globe that comprise the MSCI AC, earnings “growth,” as measured by 12-month trailing earnings, is in even worse shape than for those in the S&P 500: by Q2, it was -7%!

So this is a global thing.

The National Bureau of Economic Research (NBER), which decides when a run-of-the-mill downturn becomes an official recession, hadn’t acknowledged the recessions at the time, but it did so later on. The same will be true during the next official recession. We’ll be told only after it’s too late.

This chart by Economics and Strategy at Bank National Financial shows how earnings growth for the S&P 500 companies, as measured by 12-month trailing earnings, has sharply deteriorated, and by Q2 was barely above zero. This is slightly higher than the FactSet numbers for Q2 (-0.7%). For the companies in the MSCI AC index, earnings shrank by 7%. I added the green and blue parallel lines, the arrows, and the red circles to highlight what was going on when the prior two earnings debacles hit: the beginnings of the 2001 recession and the glorious Financial Crisis: 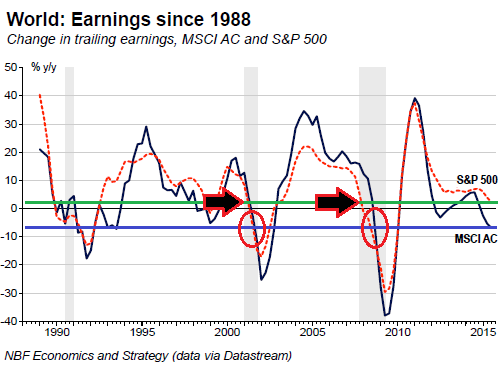 That just doesn’t happen without a US recession

The reason is simple: When corporate revenues and earnings tank, bad stuff starts happening. Companies curtail their investments further, and they cut expenses even more, all of which are a drag on the economy. And they whittle down their workforce, which drags down consumer demand even further.

This coincides with today’s high business inventories and inventory-sales-ratios. To bring inventories in line with lower demand, companies slash their orders, and this additional hit to demand ricochets up the supply chain.

These are normal business cycles. Recessions happen. They’re essential in what is left of the free-market system. It’s the process of cleaning up after a party, shutting down what doesn’t work, taking losses, wiping out debt through bankruptcies, and building the base for the next growth period.

Interest rates are already at zero. The Fed’s balance sheet is weighed down by $4 trillion in QE assets. Companies have loaded up on debt, much of it high-risk junk bonds and leveraged loans, that many companies will not be able to service during leaner times. Governments at all levels, after years of deficit spending, are burdened with enormous amounts of debt, with for example, US gross national debt more than doubling since the onset of the Financial Crisis.

And when the recession materializes, all these chickens are going to come home to roost.

So now everyone is hoping for some kind of earnings miracle in 2016, however unlikely that may seem. As Bank National Financial put it – with a total lack of conviction:

The bottom-up consensus currently sees an earnings rebound of 7.4% for the constituents of the S&P 500 over the next 12 months and about 8% for the MSCI AC. But will it come?

We think earnings growth is possible in 2016, provided of course that a few things go right. First, the global economy needs to get out of its funk.”

But by the looks of it, the global economy is just now sinking deeper into “its funk.”

So the risks the Fed promised to banish from the globe suddenly return with a vengeance. Read… This Chart Truly Depicts a New, Terrible Trend in Jobs Mess

20 comments for “Last 2 Times this Happened, the US was Falling into Recession”