The ECB started its €60-billion-a-month QE bonanza earlier this year and was expected to run it through September 2016, but already the Big Money is clamoring for more. Shook up by what’s happening in China, the ECB said it might accommodate them.

Now Standard and Poor’s warned or recommended – whichever – that the ECB could double the size of the QE program, to €2.4 trillion and extend it “until mid-2018.” That the Big Money is clamoring for more is no surprise: despite the ECB’s QE and negative deposit rates, stock prices have plunged, with the German DAX down 23% in six months.

So here comes Peter Praet, ECB Executive Board Member and Chief Economist, with an amazing presentation at the BVI Asset Management conference in Germany, showing one devastating chart after another on how the euro has failed the Eurozone economy.

Optimism, when published by economists, is usually designed to hype what needs to be hyped at the moment. This is universal. But in the Eurozone, even economists are dialing back their optimism. In the chart below, Praet shows how expectations of economic growth for five years ahead have dropped over the 15 years that the euro has been around: 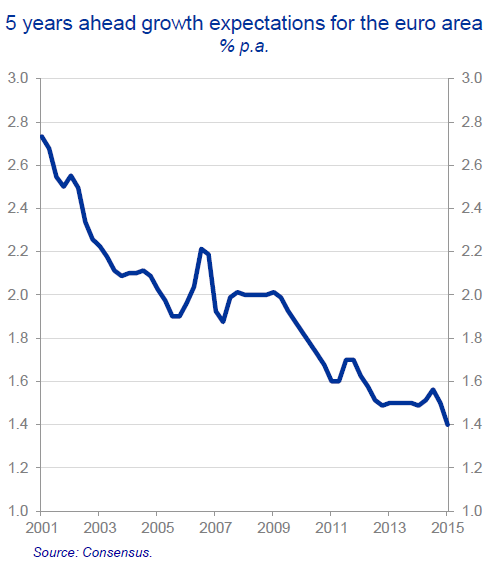 And another picture of hope v. reality: Growth as private-sector economists had envisioned it in October 2007 (dotted lines). At the time, no-questions-asked money was plentiful, even for Greece, and the sky was the limit. And this is how it turned out. Mercifully, Greece is not shown; its line would fall off the chart: 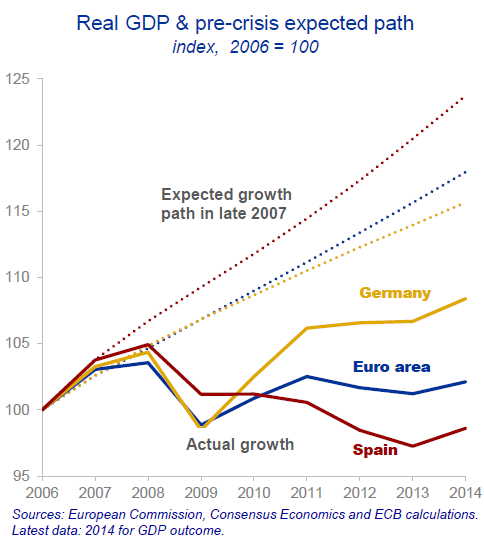 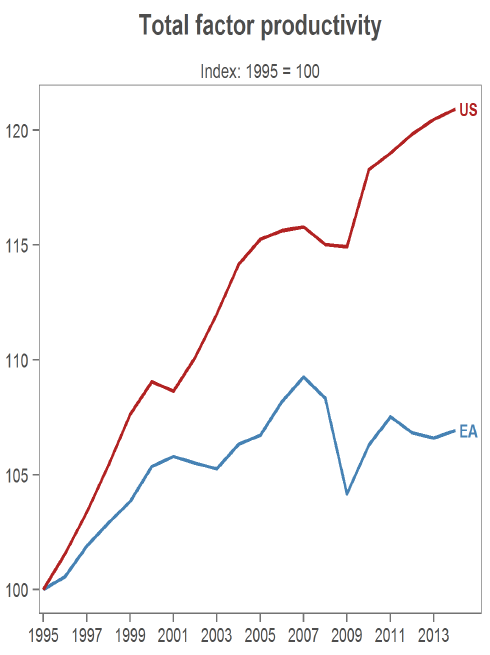 Part of this is a result of dismal investment in equipment. Despite nearly free money and knee-deep liquidly, companies aren’t investing for productive purposes. It was never high in the newfangled Eurozone, but it plunged in 2008. It is just now recovering a smidgen in Germany, but it’s still declining in the Eurozone overall. And look how far Spain has fallen. Again we’re grateful that the chart doesn’t show Greece: 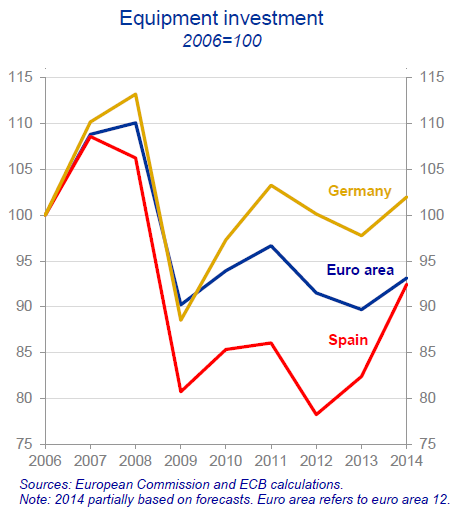 And bank loans to the private sector shriveled. Whatever banks were doing with the liquidity, they weren’t lending it out. At one end of the lending spectrum, there was no demand because the economy was withering. At the other end, businesses that needed the loans didn’t get them. In Spain, total bank loans actually started declining in 2011, in part because bad loans were being written off ever so slowly, though many of them are still on the books of the banks to be dealt with later.

The chart below, with data through June 2015, shows that bank loans have inched up this year for the first time since 2011. Germany (DE) is lumbering along. But Spain (ES) is still in the hole. 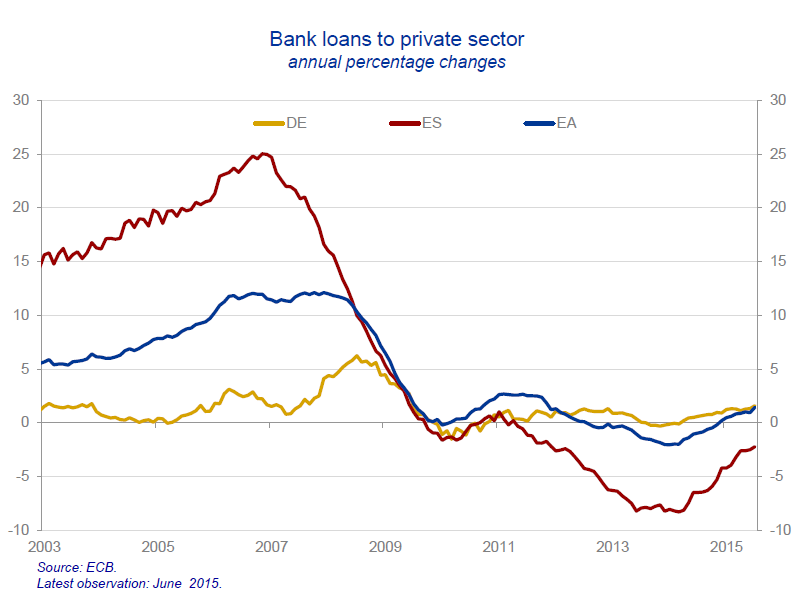 The overall unemployment rate (green line in the chart below) is still in the double digits. That’s where France is today (10.5%). The masses of “discouraged workers” – those who’re available to work but after having beaten their head against the wall for a few years have stopped looking – just keeps growing (red line): 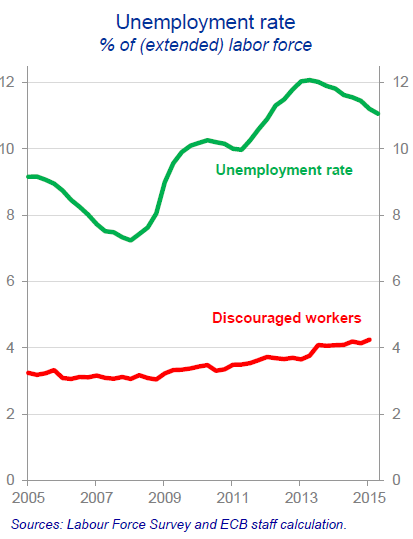 And this is how the Eurozone has split in two: On one side, countries that benefited from a (relatively) hard currency; and on the other, countries like Greece, Spain, Italy, etc. – and France – that have always had banana-republic currencies that they devalued frequently and sharply to solve whatever fiscal and other problems they had without actually solving anything. But now that they can’t devalue, they’re “vulnerable.” These two parts of the Eurozone have done nothing but diverge: 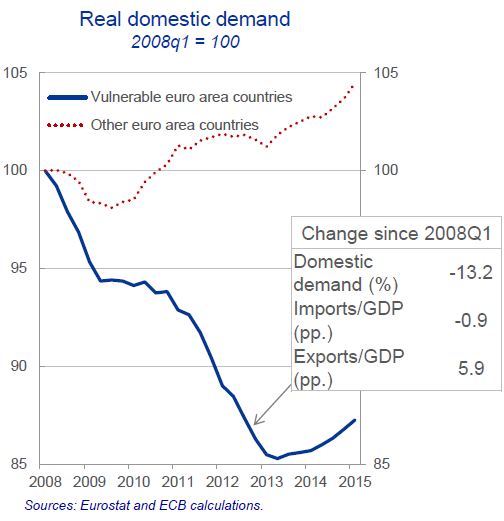 And yet, the cost of borrowing from banks has never been cheaper. This is the ECB’s indicator for the total cost of bank borrowing, based on aggregated short- and long-term rates using a 24-month moving average of new loan volumes, through July 2015: 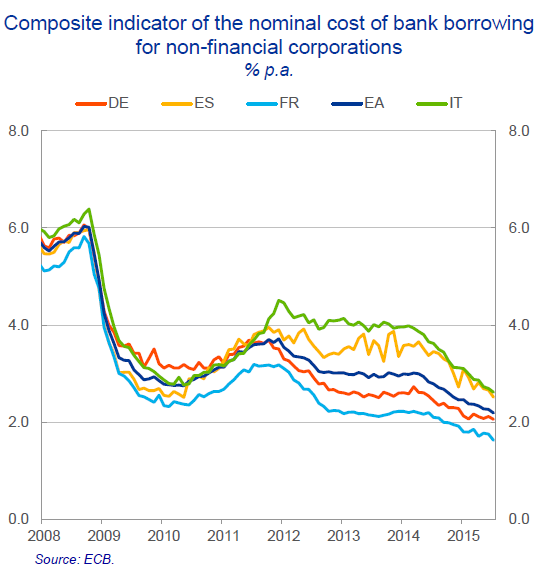 And bad loans in “vulnerable countries” have never been greater. Or rather, there is now more of an effort underway to arm-twist banks into disclosing more of them rather than sweeping them under the rug, though plenty of them remain under the rug. This chart, based on an “unbalanced sample” of 32 Eurozone banks for vulnerable countries, shows the ratios of gross impaired loans to total loans. 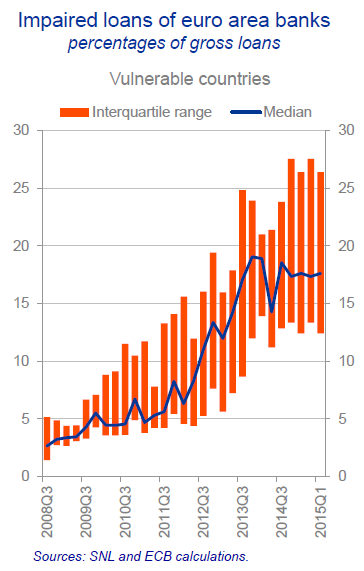 These charts are a – perhaps unwitting – demonstration that the euro doesn’t work for so many diverse economies and political environments, that “vulnerable countries” would have been better off sticking to their banana-republic francs, liras, pesos, etc., and that devaluations and defaults by individual countries would have been better overall than the current international taxpayer-funded bailout and “austerity” circus.

But it’s not as if the US were out of the woods. “It feels like someone just flipped the switch to ‘off’ without any concrete reasoning,” one of the executives commented. Read… US Manufacturing Recession Draws Eerie References to 2009

14 comments for “ECB Chief Economist: OK, I Get it, the Euro Doesn’t Work”