Stocks, bonds, real estate, classic cars, art, credits at Ashley Madison, whatever… nearly everything except commodities has soared over the past six years, perhaps not in lockstep exactly, with one moving ahead while others were still declining, but by last year, just about every asset class had soared to all-time record highs.

Asset price inflation, the express goal of the monetary policies set by the Fed and other central banks, worked for a long time. If you got in early, it was one heck of a ride up. If you had a billion bucks in early 2009, you’re now sitting on multiple billions, without having had to think all that much.

It just about didn’t matter what you put your money into, as long as it wasn’t cash.

It didn’t matter what the economy in the US or anywhere else did. It didn’t matter that asset prices no longer made sense. New metrics were bandied about to justify these prices, and it worked, and everyone with money invested in the scheme was in heaven.

If everything went up together, everything might come down together, perhaps not exactly in lockstep, but one asset class first, then another. And the question many people ask is this: where the heck are you then supposed to put your money?

The answer is never simple. There are issues with every “solution.” No one knows for sure what’s going to happen next. But here are some thoughts and some numbers….

By Brian Hunt and Ben Morris, editors of DailyWealth Trader, an excerpt from their essay, The Bull Market in Cash Is On:

In late March, we called it “one of the best assets to hold in uncertain markets” in our DailyWealth Trader service. The title has since proven its merit.

How has this asset performed in U.S. dollars? Well… it is the U.S. dollar. The asset is cash.

Stocks have fallen hard over the last month. If you had most of your assets in stocks, it was probably hard to stomach. Gold and silver have declined, too, but more gradually. At the same time, the value of your cash has climbed… 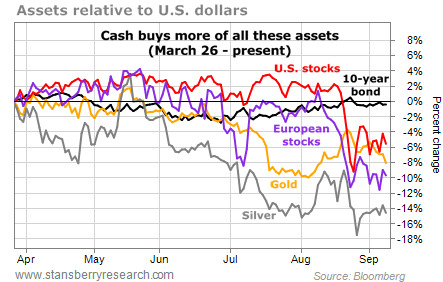 Think about it this way: When an asset falls, it isn’t just a bear market in that asset. It’s also a bull market in cash. It’s an increase in the amount of assets you can afford.

This is an important idea to keep in mind today. Global financial markets have broken their primary trends… and are now struggling. And we’re likely in for more volatility in the weeks and months ahead. So holding more cash might let you sleep better at night.

It allows you to weather shocks to financial markets… and to pick up good deals when they appear.

In our March 26 DailyWealth Trader issue, we explained that lots of folks object to this idea:

Many people don’t like to keep large portions of their wealth in cash because they feel like they always have to be “doing something.” They hate sitting still. They see a large cash balance in their account and start looking for a stock to buy… a commodity to buy… anything to buy. It burns a hole in their pocket.

But sophisticated investors have a more useful way of viewing cash. We see cash as “returns in waiting.”

When there aren’t lots of great, low-risk investment ideas out there, the best idea may be to invest in cash. Keep in mind, we’re not saying you should sell everything you own. For lots of folks, holding 10%-20% of their investable assets in cash is a good amount most of the time. During less certain markets, even 30%-40% could be appropriate.

Hold however much cash makes you comfortable. If you’re extremely nervous about stocks, hold more cash. Nerves lead to bad trading decisions. So you’ll be better off. If you’re confident that stocks are headed higher, hold less cash. But still hold some.

We always encourage readers to use intelligent asset allocation as part of an inclusive “catastrophe-prevention plan.” Holding some of your assets in stocks, bonds, precious metals, and real estate will lead to less volatility in your overall investment portfolio.

And cash is one of the most valuable assets you can own. While other assets are dropping, the bull market in cash is on. By Brian Hunt and Ben Morris, editors, DailyWealth Trader

This Chart Shows: Investors Are Losing Faith in the Fed. Read… A Change in Market Dynamics I Find Particularly Troubling

15 comments for “The Bull Market in Cash Is On”