In today’s essay… a discussion about gravity. Not the kind of gravity that causes objects to draw closer to each other. That gravity is a mystery that physics can’t yet explain.

I’m talking about financial gravity. And the causes of financial gravity are well-known. Financial gravity is the cost of capital. The cost of money drives the price of everything else in a free market because capital is the root of supply. Want more oil? Fine, invest heavily in new supplies. We’ve done exactly that. Over the past decade, we’ve invested record amounts in the oil patch – 300%-400% more than has ever been spent before.

As a result, supplies from North American wells have doubled. And likewise, given the glut of supply, it’s no surprise that oil prices have fallen in half. The root cause of the growth in supply wasn’t really technology – that’s how supply increased. But the root cause was vast amounts of capital available to oil companies at the lowest cost in modern history. Where did the oil really come from? Cheap capital.

The cost of capital also drives much of the most important consumer activities in our economy. If you were the government of the United States and you wanted to ensure that your “bailout” of General Motors wasn’t a complete disaster, what’s the best way to encourage more people to buy a new car? Make the capital to buy new cars more available and cheaper than ever before.

Bank of America predicts that new car-loan securitizations – the packaged sale of car loans – will reach $125 billion this year… Again, a record. These loans will account for more than half of all consumer loan securitizations. Keep in mind that roughly 30% of the loans in these securitized packages will be subprime. That’s why credit losses on these bonds are growing and beginning to reach levels last seen in 2008. More on that in a minute…

For many years, subscribers have asked us about the inflation/deflation debate. In our minds, there was never a debate. The greatest contribution the “Austrian” school of economics made to financial thought was the proper definition of inflation.

Most people, however, still do not understand that inflation isn’t necessarily the increase of prices according to an index. Often, credit inflations do not cause rising prices at all… They frequently cause falling commodity prices. The proper definition of inflation is the creation of credit in excess of savings and foreign investment. And by that definition, the Federal Reserve has initiated one of the greatest inflations in history.

The Fed has provided $4 trillion in additional credit to the U.S. Treasury. Saving didn’t create this credit. It was created out of thin air. That’s a perfect example of inflation. For the last six years, this immense amount of credit has artificially reduced the cost of capital across our entire economy – lowering it to almost zero. It’s as though the Fed suspended “gravity” in our economy. And not surprisingly, a boom erupted where this credit landed.

The two most popular beliefs in the credit markets back in 2009 guided where most of the credit went. Back then, even sophisticated people on Wall Street (including Warren Buffett and GMO Financial founder Jeremy Grantham) genuinely believed we were running out of oil.

The performance of car loans during the crisis had convinced lenders that consumers wouldn’t default on car loans because they had to have the vehicles to get to work. (The line back then was that you couldn’t drive your house to work, so you’ll default on your mortgage, but not on your car loan.) A related trend was the government’s efforts to essentially guarantee all student loans. Presto… the credit flowed there, too.

In the short term, these policies have stimulated our economy. Texas led employment growth following the last recession. Outside of employment related to oil investments, employment hasn’t grown at all in the U.S.

Likewise, the two other booming areas of our economy have been auto sales (which neared an all-time high last year with 17 million new cars sold) and capital investment in higher education. Drive through any major university and you will see plenty of cranes. It’s no surprise that the only forms of consumer credit that have grown since 2009 are student loans and car loans. Total outstanding car loans just passed $1 trillion for the first time ever. But where will this lead us?

The credit stimulation our economy received was phony. The capital wasn’t earned or saved. The positive result was a boom. But these investments and this consumer borrowing happened in an environment nearly free of capital costs (zero gravity). In this world, almost anything would “fly.”

A lot of the money invested in the oil business, for example, has gone into projects (like the oil sands) that aren’t economic and aren’t likely to be in a lifetime. A lot of cars were built and sold to people who can’t actually afford them. These people will eventually default. Sooner or later, soaring car loan defaults will drive down the prices of used cars, making it difficult to sell new ones at a profit.

That’s the downside to a phony boom. Since these investments weren’t financed with actual savings, there won’t be enough demand to sustain the debts that have been created. You can think of savings and investment as a seesaw. Without roughly the same amounts on either side, you’re going to have a problem.

For the last six years, our economy was on “tilt” in a way most people think of as positive: huge investments in oil, and plenty of credit for consumers. Now, the opposite kind of “tilt” looms right in front of us. The boom, as it was not financed with savings, will surely lead to a bust of similar magnitude.

Last month in my Investment Advisory, we detailed how both car loans and oil investments are beginning to sour. These poor investments and poor lending decisions involved hundreds of billions of dollars in bonds and loans that have been packaged into bond-like securities. The worsening performance of these debts will eventually “spill over” into other areas of the bond market.

We think we’re seeing a pattern very similar to the late ’90s emerge today. High yield typically overbuilds in one industry before realizing stress in that sector – think telecom then, commodities now. Over time, this develops into a risk aversion that spills into the broader market.

The stress has yet to make a meaningful impact to non-commodity sectors, but we view this lack of movement not as a positive, but just a delay of the inevitable. With heightened sensitivity to earnings, coupled with rate risk and further commodity weakness, we think poor fundamentals and demand for higher compensation for illiquidity will soon be reflected in prices.

I’ll save the details and the fine points for my subscribers. But the bigger trend is easy to see. Every investor in stocks should be watching the chart you see below. As I’ve been warning since 2013, the high-yield bond market has reached completely unsustainable levels thanks to the Fed’s massive credit inflation. 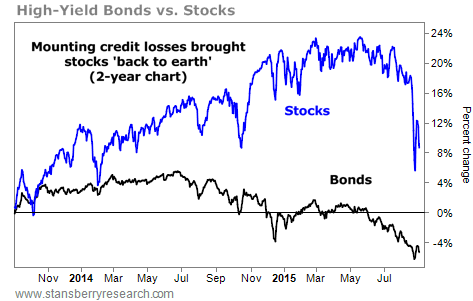 As this credit bubble deflates, “gravity” will return to our economy. Capital costs will begin to grow. Terms for credit will get tougher. The rising cost of capital will result in bad loans, bankruptcies, repossessions, unemployment, softer demand, and lower securities valuations. By Porter Stansberry, Daily Wealth

5 comments for “‘Gravity’ Is Returning to the Markets”