The median house price in San Francisco has jumped 103% since the first quarter 2012 to $1.35 million in July; the median condo price has jumped 74% to $1.125 million. These aren’t palaces; condos include 1-bedroom and smaller units!

And incomes in San Francisco, it turns out, haven’t soared in lockstep (the Census Bureau pegged the median household income at $75,604 in 2013 though it has risen since). A similar scenario has played out in other Bay Area counties. And thus housing affordability has plunged. “Housing crisis” – that’s what a lot of people call it.

The Housing Affordability Index (HAI) for the 2nd quarter, just released by the California Association of Realtors, shows that only the top 10% of households in San Francisco can afford to buy a median house, and this despite historically low mortgage rates!

By comparison, 30% of the households in California and 57% of the households in the US can afford to buy a median home. To be considered “affordable,” the mortgage payment, property taxes, and insurance costs can’t be more than 30% of household income. This chart from a new report by Paragon Real Estate shows the absurdity in the 9 Bay Area counties, compared to California and the US: 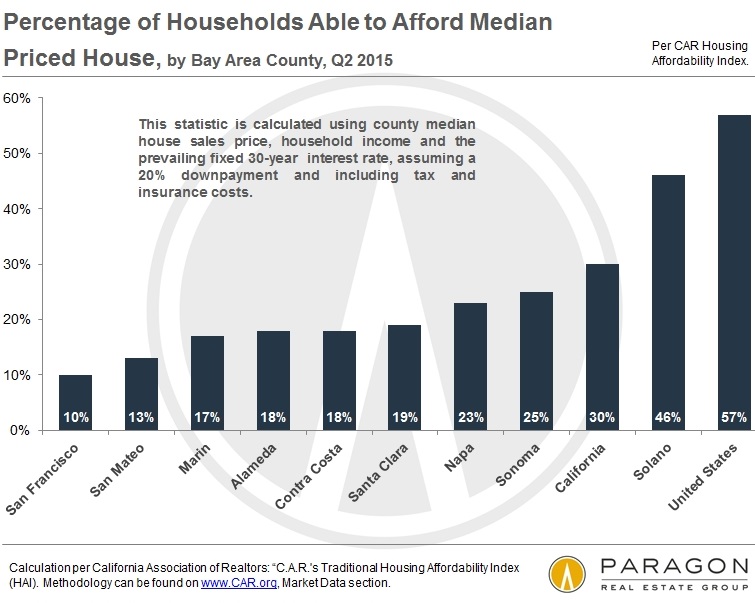 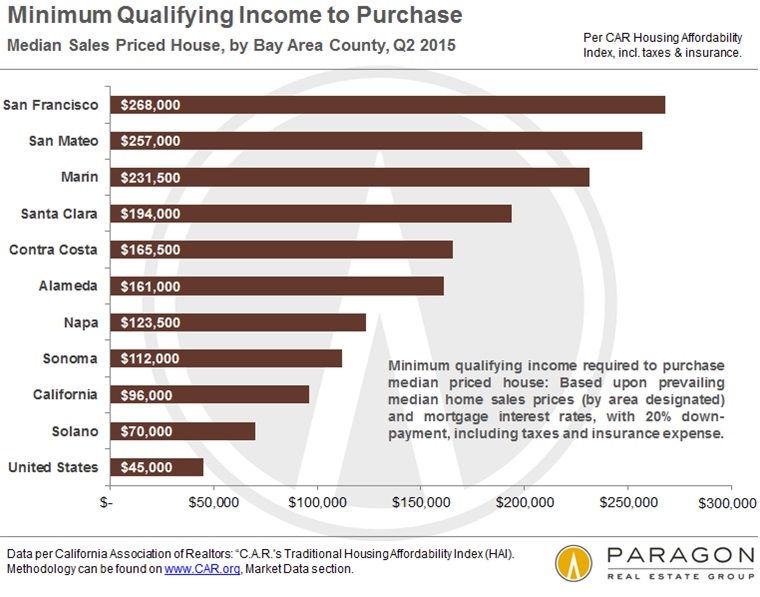 It gets even more absurd. The Housing Affordability Index assumes “that a household can make a 20% down-payment on the median-priced home and that the mortgage would therefore be 80% of the median house price.”

Alas, that down-payment on the median house price of $1.35 million in San Francisco would be $270,000. That’s how much money this index assumes the median household, earning just above $75,000 a year, can save up even though life in San Francisco is extraordinarily expensive, and most people on median incomes can’t save anything, with the median asking rent these days at $42,288 per year!

OK, people living in a rent-controlled unit for the past 20 years have got it made, but they can’t afford to move ever into anything else because it would simply rip their entire budget apart. These people are stuck. I know a few of them. That’s the curse of a great deal (and it’s a different sort of curse for landlords too).

So if a household can’t come up with that $270,000 down-payment, it would have to finance closer to 100% of the median price, if they can get a mortgage under these circumstances. Mortgage payments would jump, and affordability would plunge further.

Even in Q1 2012, the recent low point in home prices in San Francisco, and the highpoint in affordability, only 30% of the households could afford to buy a median home. And this is what the relationship between soaring prices (gray line, left scale) and affordability (blue line, right scale) looks like: 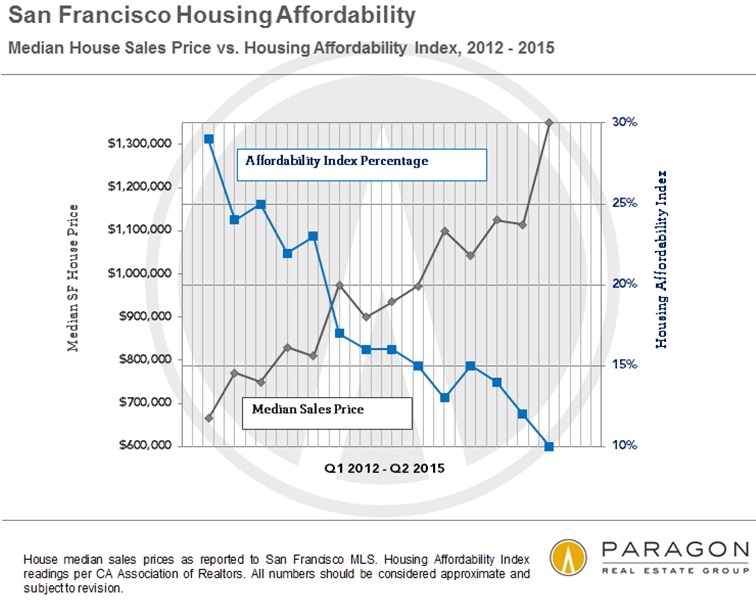 What’s the secret sauce that has created this absurdity in San Francisco and the Bay Area, and what has kept it from imploding so far? The tech and startup boom, in at least two ways:

These companies, whether they have any sales or not, have created a lot of well-paid jobs in the Bay Area. And among some of the participants in the tech boom, household wealth has ballooned.

Paragon Chief Market Analyst Patrick Carlisle points at “gains from a surging stock market and such things as stock options and IPO proceeds at high-tech companies, which have generated huge amounts of new wealth over the past 3 years. New wealth, in particular, looks to invest in homes….

So what could prick the Bay Area housing bubble?

The same thing that has pricked it before: a swoon in tech, an end of the IPO boom, and a collapse of the ludicrous “valuations” assigned behind closed doors by a handful of players to startups. Individuals, such as employees, who are in a hurry to cash in some of their chips can sell their shares in special arrangements and turn these “valuations” into real money with which to buy an overpriced home.

But the entire construct depends on the exit doors: there must be someone else – either the public or a large corporation – that will buy the startup at these ludicrous valuations. That exit door always closes when the stock market swoons. The money suddenly dries up. Well-paid jobs get axed as money-losing companies try to hang on for as long as possible. Stock options become worthless, equity stakes meaningless. Sellers try to dump their no longer affordable homes on the market. Homebuyers evaporate. Hot air hisses audibly out of the housing bubble.

And there is another needle approaching the bubble. Paragon’s Carlisle:

He warns when interest rates begin to rise, “there will be potentially dramatic effects on affordability, which could presumably affect demand and prices.”

San Francisco and much of the Bay Area cycle through booms and busts with legendary extravagance. The last two times, stock market crashes brought down the housing bubbles. This time is different. This time, not only are stocks teetering precariously at record highs in the midst of a mediocre economy bogged down in languishing corporate sales, but mortgage rates are near historic lows. And there is a good chance that, this time, both will head simultaneously in the wrong direction.

In San Francisco, the two sides are separated by the money line. Read… The San Francisco “Housing Crisis” Gets Ugly