You wouldn’t know by looking at the US Treasury market, which remained relatively sanguine this week, with only a little panic buying on Tuesday. So 10-year Treasuries ended the week near where they’d started it. But at the other end of the spectrum, the riskiest portion of the junk bond market just blew up spectacularly.

There were a lot of culprits to catch the blame. At the top of the list was the devaluation of the Chinese yuan. It caught the corporate bond markets by surprise, though it shouldn’t have, injected all kinds of stress into them, and drove up bond spreads, with investors demanding a higher yields for riskier bonds. It hit the riskiest segment of the junk bond market with a sledge hammer.

Given the precarious state of the current credit bubble and the pandemic nervousness about it, bond investors were rattled by the moves of the People’s Bank of China. In prior crises, such as the 1997 Asian financial crisis and the 2008-2009 Global Financial Crisis, the PBOC had maintained a fixed exchange rate with the dollar. It didn’t devalue, as other countries were doing, to get out of the crisis. The yuan was seen as stabilizing the markets. Now the yuan is seen as destabilizing the markets.

It didn’t help that the Fed’s cacophony has been pointing at a September rate hike. It would be the first ever in the careers of millennials working on Wall Street. It would bring to an end the 30-year bull market in bonds. Even most middle-aged money managers have not yet experienced the alternative, other than a few short-lived dips and panics. On a visceral level, they simply can’t believe rates can ever rise over the long term. To them, rates can only go down.

And oil prices plunged to six-and-a-half year lows, taking out the low set earlier this year, instead of bouncing off it. West Texas Intermediate ended the week at $42.18 a barrel. But in Canada, the benchmark blend Western Canada Select hit a catastrophic C$29.79 a barrel.

WCS always trades at a discount to WTI. But as some refineries were shut down for scheduled maintenance, a BP refinery in Whiting, Indiana, that can process Canadian heavy crude, was also shut down for “unscheduled repair work.” Getting the refinery up and running at full capacity again could take several weeks. Meanwhile, the crude, with no other place to go, goes into storage.

This scenario was punctuated by a cascade of bankruptcies that eviscerated unsecured bond holders, and not all of them were energy-related. In Delaware alone, there were 20 Chapter 11 filings this week, including the prepacked bankruptcy of Hercules Offshore and a gaggle of related companies. Risk, which the Fed had so ingeniously removed from the equation, is suddenly rearing its ugly head again.

How suddenly? This chart of yields at the riskiest end of the junk bond market – bonds rated CCC and below – shows what happened. These bonds have been selling off over the past 12 months, with exception of the sucker rally earlier this year, and their yields more than doubled from less than 7.9% in June a year ago to 16.2% by Thursday evening. And Thursday was a massacre: 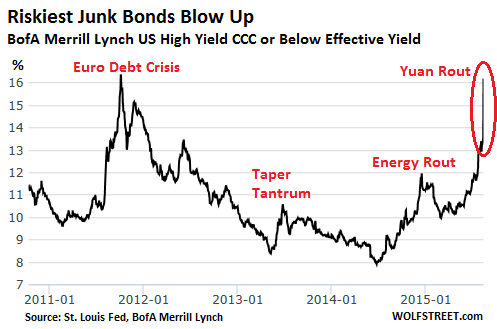 On Thursday, yields jumped 2.6 percentage points, from 13.58% to 16.18%, as these junk bonds plunged. Those kinds of single-day vertigo-inducing sell-offs are rare in normal times, and there haven’t been any since the Financial Crisis.

Junk-rated companies that confronted this spooked market during the week to issue new bonds “faced challenging conditions, as China’s yuan devaluation sent shockwaves across global markets and oil prices continued to fall,” S&P Capital IQ reported in its LCD High Yield Weekly. And the bane of all bond issuers: some of them had to offer “healthy concessions” to find buyers for their bonds.

Concessions! Investors are opening their eyes, and they’re demanding to be compensated at least a tiny bit for the enormous risks they’re taking at that spectrum of the market.

And in the secondary market, where junk bonds are traded, energy bonds got whacked again, in line with the ongoing oil price fiasco. “The damage was widespread, with some names trading 2-5 points lower,” LCD High Yield Weekly reported, and “the rough week in the commodities space weighed heavily on the broader market.”

Among the beaten down junk bonds were Chesapeake’s $1.1 billion of 5.75% notes due 2023. On July 21, last time I wrote about them, they’d just hit a new all-time low of 84.88 cents on the dollar. This week, they were reportedly pegged at 72 cents on the dollar. It seems, bond-fund managers are finally waking up from their Fed-induced torpor, and they’re suddenly seeing with horror what they’ve plowed their clients’ money into, and some of them are trying to get out while they still can.

China is also hitting global companies that generate a big part of their profits from their sales in the former growth miracle. Such as GM. But now elements are coagulating into a toxic mix. Read… China Mess, Yuan Devaluation Spread to the US