China is the radioactive core of the entire global bubble.

Bubblevision’s Scott Wapner nearly split a neck vessel today denouncing the US stock market sell-off. It was completely unwarranted, he thundered, because China don’t have nothin’ to do with anything.

Why, insisted CNBC’s best dressed pom-pom boy, China’s stock market has never been correlated with its economy, and, anyhow, its economy doesn’t matter all that much to the S&P 500 because China accounts for only 14% of global GDP.

Besides that, China’s stock market is exactly like what Yogi Berra said about his favorite restaurant: It’s so crowded, nobody goes there anymore!

That is, according to the talking heads Chinese household’s don’t go to the bourses, either. Few of them own stock and equities account for only 20% of household wealth compared to upwards of 65% in the US.

So enough of the schwitzing about the red chip sideshow. Buy the dip!

Indeed, that’s exactly what the insentient robo-traders did at the close. After banging the 200DMA, they bid the S&P right back-up to Monday’s VWAP (volume weighted average price) in the final seconds, thereby filling-up their sell buckets to unload on tomorrow’s dip buyers. As Zero Hedge noted,

On the day, US equities staged their standard JPY ignited momo bounce off the 200DMA – running perfectly to VWAP in the S&P, before limping lower…and a mini algo meltup to VWAP at the close… all completely human!!

As for purportedly sentient humans, however, the better advice would be to flee the dip with all due haste. The truth is, China is not a sideshow; its the radioactive core of the entire global bubble.

The Wall Street shills and touts are so oblivious to this fundamental reality that they can not even see the obvious facts about China—to say nothing of the macro-quick sand upon which the entire global economy is poised.

The meme of the day—that China doesn’t have so many gamblers—is hilarious. From stem to stern, China’s version of red capitalism has evolved into the greatest gambling den in history. The whole thing is a giant punt—from 60 million empty high-rise apartments, to ghost cities and malls, to endless bridges, highways and airports to nowhere, to laying down more cement in three years than the US did during the entire 20th century.

But today’s Wall Street admonition to move along because there is nothing to see in the plunging red bourses really takes the cake. In fact, yesterday’s 8.5% plunge on the Shanghai market—mostly in the last hour and in the face of $1 trillion of state buying power and several thousand paddy wagons thrown at sellers, malicious or otherwise—is merely a foreshock; it’s a fateful warning about the global-scale financial temblors heading at the incorrigible army of dip buyers in New York, London and their farm teams elsewhere.

In the first place, upwards of 90 million households are in the Chinese stock market, most of them buried under margin debt. Among them, they hold exactly 258 million trading accounts and a significant fraction of these were opened in just the past year by Chinese pig farmers, bus drivers and banana vendors, among millions of quasi-literate others.

The country went nuts speculating in stocks just like it has in empty apartments, coal mines, expensive watches, Macau slot machines, fine wines, copper stockpiles, and almost anything else that can be bought and sold. So when the Beijing overlords go into full panic mode about the stock market plunge, they actually have a reason: There are more trading accounts in their red casinos than there are people in Japan, Korea, Thailand and Malaysia, combined!. Do they fear the wrath of the tens of million of newly affluent Chinese that they have lured into the stock market? Yes they do, and for good reason. Namely, if the stock market comes crashing back to earth—–then what is at stake is not merely several trillion in paper wealth, but the essential credibility of the regime itself.

After all, even in China’s fevered gambling halls the people would surely notice the $7 trillion elephant missing from the room, and wonder about its implications for the rest of the Beijing Ponzi. That is to say, at its June 13 peak the Shanghai index was trading at 70X the reported LTM earnings of its constituent companies. Were these nosebleed valuations  to be re-rated to a merely bubbly 30X, the Shanghai index would plunge back to its level of one year ago, vaporizing the aforementioned $7 trillion in the process. 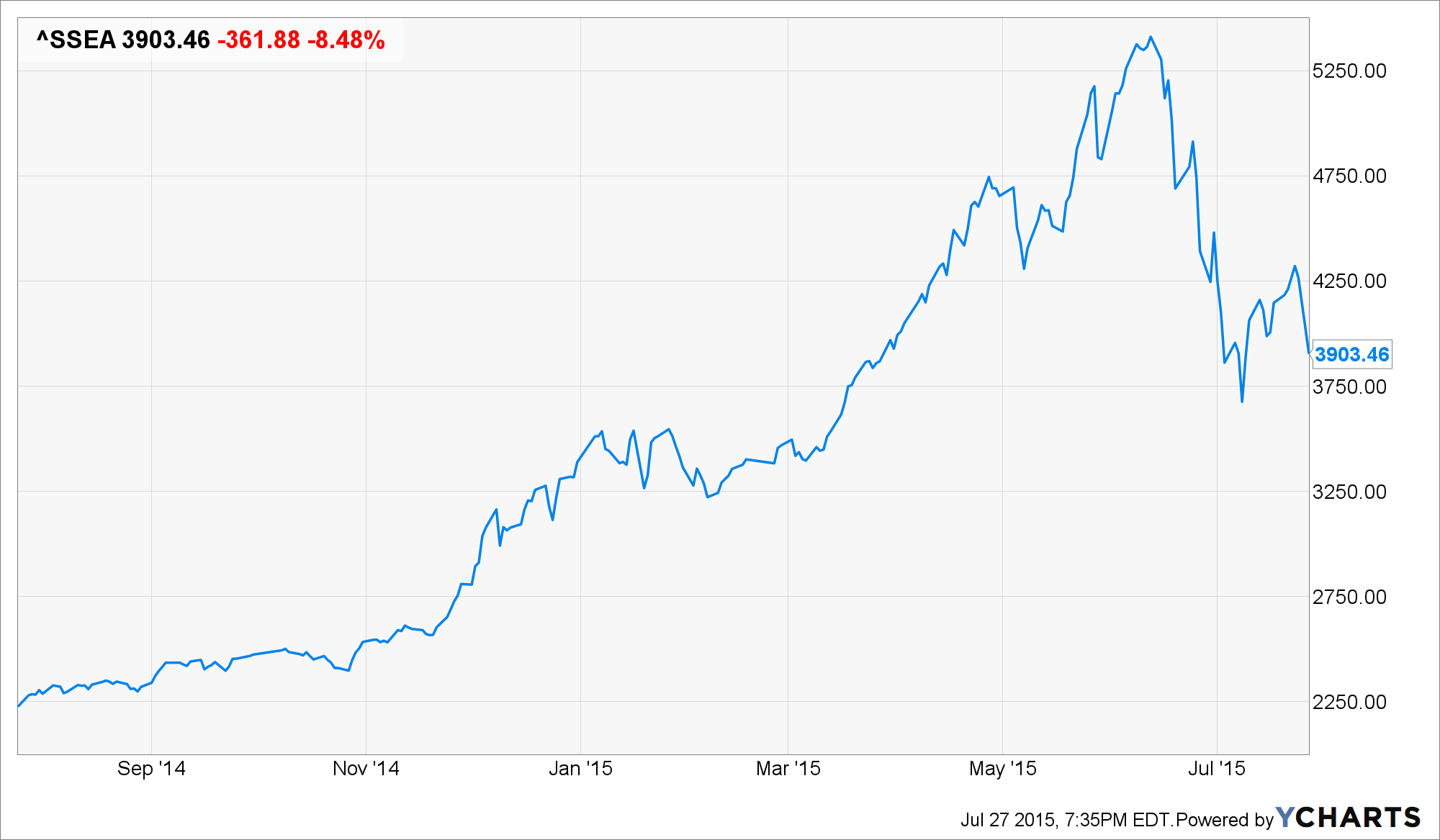 The truth is, the Chinese stock market is not even worth 30X because the entire Ponzi is unraveling. The Chinese economy is bloated with monumental malinvestments and stupendous excesses—–the likes of which have never previously been visited upon a modern industrial economy.

Accordingly, while it is impossible to gauge the magnitude and timing of the hard landing now imminent, one thing is certain. Namely, the virtual impossibility that an economy flushed with a helter-skelter debt expansion from $2 trillion to $28 trillion in just 14 years—especially one that has no rule of contract law or even semblance of honest capital markets—can avoid a thundering deflationary collapse.

Stated differently, profits have already nearly vanished in upstream sectors like coal, steel, aluminum and cement; are now eroding in shipbuilding, construction equipment, solar equipment, and other capital goods; and will soon be falling in overbuilt consumer industries, especially, automobiles, as well. Like Japan in the mid-1990s, China is heading for an era of profitless deflation as its credit binge comes to an end.

In short, China’s companies are not worth last July’s stock market valuation, let alone their current perilous perch. And that’s where the skunk in the woodpile comes in. The Beijing suzerains have shot their wad. They cannot afford to pump more fiat credit into the stock market, meaning that the only remaining recourse is to arrest the sellers as enemies of the state.

Needless to say, red capitalism is not the same as Mao’s red socialism. The latter held that power comes from the barrel of a gun, and if push-came-to-shove, full jails and energetic firing squads could enforce the regime. Indeed, even after Mao foolishly denuded the countryside of insect-eating birds and farm implements during the Great Leap Forward, the regime handily survived 40 million deaths from the resulting famines.

But since the time of Mr. Deng, the power of the Chinese communist party has come from the end of a printing press, and for all practical purposes the People’s Printing Press is out of business. That because China is now imperiled by massive capital flight.

During the last five quarters its external accounts have hemorrhaged upwards of $800 billion of private capital outflows. That staggering figure represents the sum of its current account surpluses plus its drawdown of official reserve assets. Stated differently, had China’s $400 billion of current account surpluses been added to its reserves during that period, its reserve balance would total $4.5 trillion, not $3.7 trillion. The difference is a massive stampede of hot capital, as depicted in the chart below.

So here’s the thing. A regime that lives by the printing press is consigned to eventually dying by it.  Accordingly, Beijing cannot open up the credit spigot again without further exacerbating its torrid capital flight.

So the only tool left to prop-up the red casinos is Beijing’s enormous fleet of paddy wagons.  But with 258 million trading accounts in place, it is doubtful that even Beijing can arrest the sellers fast enough to forestall the stock market plunge still ahead.

As the communist oligarchs desperately hop from increasingly gimmicky stimulus ploys to the mailed fist of economic repression, one thing is quite predictable. Even its phony numbers machine will not much longer be able to hide the fact that the Chinese economy is grinding to a halt, and that the miracle of red capitalism was never remotely what Wall Street cracked it up to be.

Here’s the thing. Between the 2007 pre-crisis peak and 2014, the estimated world GDP expanded from $53 trillion to about $69 trillion. But fully 33% of that $17 trillion gain was directly accounted for by China; and far more than half of the total is actually attributable when the multiplier effect on resource suppliers like Australia, Brazil and Canada is accounted for, and when the pull effect on intermediate component suppliers like south Korea, Malaysia, Japan and Taiwan is added to the brew.

That’s not 14%. The collapse of red capitalism in China is exporting gale force deflation to the global economy, meaning that the already evident rollover of world trade is just beginning its descent.

So S&P profits are not immune, not by a longshot. One of these days, perhaps soon, even Scott Wapner will get the memo. By David Stockman, David Stockman’s Contra Corner:

Now these signs are getting even more worrisome, such as electricity consumption, whose growth rate has dropped to a 30-year low. Read… The Chilling Thing China’s Electricity Consumption Just Said about the Economy