No one knows to what still crazier level this stock market is headed, or what kind of decline – if any ever, the bulls say – it will experience. But we all have our signs and signals that we keep our eyes on, hoping to get the drift in time.

No one wants to go through another crash like the last three (1987, 2000, and 2008 which all occurred during my investing years) with any significant amount money tied up in stocks (not to speak of bonds).

Because this could get ruinous.

And no one wants to go through what Japanese equities went through for the 23 years following the 1989 bubble peak. Sure, very lucky traders can make money riding the short-term movements of a bear market. But for investors, these things can be a nightmare. Markets can get very costly. They can change lives, one way or the other.

It used to be that bonds and stocks moved in opposite directions, that you could hedge your exposure to stocks by owning bonds, and vice versa, and you’d just tweak your allocations based on where you saw the dominant risks. But thanks to central bank machinations, as we should call their interventionist monetary policies, stocks and bonds have soared together more or less for the last seven years, and they’re now putting investors at risk with a possible joint-unraveling.

Because central banks have crushed that time-honored hedge.

The Fed’s explicit policy was to push investors to take greater risks. Investors did, and in so doing, created a number of bubbles, including simultaneous equity and credit bubbles, which are linked in a myriad ways. So if you consider stocks at risk, then bonds are too – and vice versa.

Any unraveling could be sudden and steep. Or it could take many years. My gut feeling is that the Fed would try to step in and stop a crash, but that it won’t do squat to roll back an orderly slow-motion decline, interrupted by minor rallies. In that case, asset prices would shrivel gradually over many years. In addition, inflation would gnaw on their purchasing power. And unlike a real crash, such a scenario would be devilishly hard to trade.

So here is another one of those signals that we keep our eyes on, this one explained by Jeff Clark, a trader, former money manager, and now editor of the Stansberry Short Report, an investment advisory focused on short-term options trading. He doesn’t have a functioning crystal ball either, but the thing is, he is no perma-bear!

The stock market is topping. The S&P 500 came close to hitting a new all-time high last Monday… rallying as high as 2,132. But then it turned lower and declined sharply by the end of the week.

The market is now oversold. So we can expect a bounce in the short term. But the intermediate-term trend is lower. I still expect the S&P 500 to decline toward the 1,990 level between now and October.

And I am growing concerned about the potential of a longer-term top developing. The broad stock market peaks just about every seven years. The last top in the market occurred back in December 2007… so this current bull market is growing old.

For example, the red circles on the chart below show the last two times the index dropped below the 20-month EMA, in late 2000 and early 2008… and bear markets began. 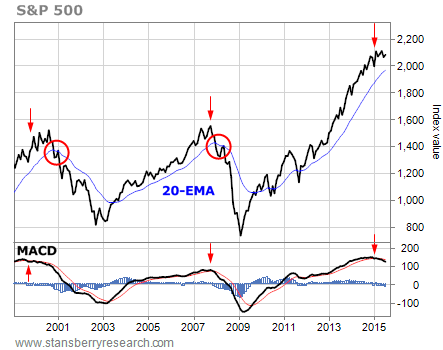 Right now, the S&P 500 is still comfortably above its 20-month EMA. Stocks are still in a bull market. But look at the moving average convergence divergence (MACD) momentum indicator. The red arrows point to past times the MACD peaked and began to move lower. This happened close to the market peaks in 2000 and 2007. This action turned out to be an early warning sign of an impending bear market.

The MACD has turned lower from an extremely overbought condition. So it’s best to be extremely careful with new long positions right now. The price action in the S&P 500 is still bullish, and it will remain that way as long as it holds above its 20-month EMA (currently at about 1,970). But it looks like we are entering a transition phase.

Keep an eye on this long-term chart of the S&P 500. The bull market may be nearing its end. By Jeff Clark, via Growth Stock Wire.

So China is wobbling. But it’s not a sideshow; it’s the radioactive core of the entire global bubble. Read…. Wall Street Still Didn’t Get The Memo – China’s Done!

18 comments for “The Bull Market Is Nearing an End”