This is one of those things that at first gets ascribed to sampling error or a statistical fluke or the weather or something, but then it wobbles lower month after month, in crass defiance of all rosy scenarios that had been so carefully laid out, and confirmations are hailing down from other directions, and suddenly it’s serious.

In early January, the economic confidence of Americans had reached the highest level in the Economic Confidence Index since Gallup started tracking the data in 2008. At +5 in January, the index wasn’t particularly high. But most Americans don’t live in the glorious Fed-goosed Wall-Street economy. They live in the real economy. And there, things have been tough.

Crummy as it was, January was practically glorious compared to the low of the Financial Crisis, when the Economic Confidence Index hit -65. That must have been at about the time when Treasury Secretary Hank Paulson told Congress that the world would end unless he got unlimited means and power to bail out certain big financial outfits, such as his former employer Goldman Sachs.

But in February, economic confidence began to zigzag lower. The index for the week ending July 26, released today, dropped another 2 points from last week, to -14, the worst level since September. This is what “gradually” (as Gallup called it) swooning economic confidence looks like: 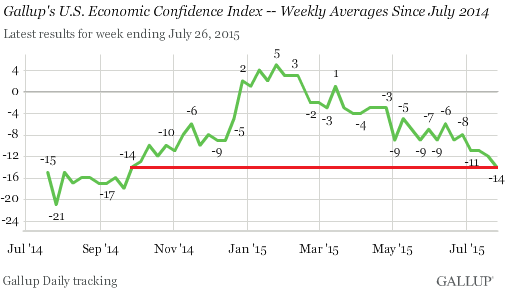 Last week, I fretted over the deterioration of Americans’ economic outlook since January, which had plunged 25 points from +7 in January to -18 now, and I wondered what dark clouds Americans were seeing in the future that would impact their own lives, clouds that the ebullient stock market has remained blind to.

Today, the future conditions index remained at this dreary level, with 39% of Americans saying the economy is “getting better,” while 57% – that’s well over half – saying it is “getting worse.”

But in terms of current conditions, as of last week, Americans had not yet thrown in the towel: that index had been down “only” 8 points from +3 in January to -5 last week. But today, Americans’ view on current conditions caved, and the index plunged 4 points in one fell swoop to -9, with only 23% of Americans saying the economy is “excellent” or “good” and 32% saying it is “poor.” 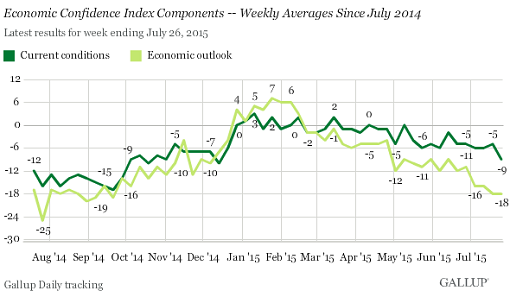 The explanations get flimsier by the week. Gallup:

Though Americans’ confidence in the national economy has skewed negative for six months now, the recent drop of the current conditions component comes on the heels of a new path for solving the Greek debt crisis and amid a tumultuous period for Chinese stocks. The instability abroad could be fueling Americans’ doubts about the health of the U.S. economy, not to mention that the Dow closed lower several days in a row last week.

Alas, most Americans don’t pay attention to stock markets, and particularly not the markets in China. Besides, US stock markets remain near all-time highs, and there hasn’t been a real sell-off of any kind in a long time. Tiny Greece has never been a huge concern for Americans. Instead, Americans are worried about the economy as they see it around them. They don’t need Greece and China to start fretting.

So today, there was a sudden confirmation that the rosy scenario isn’t working out for many Americans. The Conference Board’s Consumer Confidence Index plunged – “unexpectedly,” as it was ironically called in the media – a steep 9 points to a 10-month low of 90.8, after having already revisited the over-100 mark earlier this year.

Even the elusive level of 100 isn’t all that great: the index peaked at over 180 before the dotcom crash and at 140 before the Financial Crisis.

While the present situation index, which measures current conditions, fell 2.9 points to 107.4, the future expectations index plummeted 12.9 points to 79.9 – suddenly, and beyond doubt “unexpectedly,” hitting the lowest level in a year and a half!

The report blamed the sharp deterioration on a “less optimistic outlook for the labor market, and perhaps the uncertainty and volatility in financial markets prompted by the situation in Greece and China….”

But forget Greece and China: In June, a measly 17.9% expected business conditions to improve over the next six months. In July, an even measlier 14.7% did so.

The labor market worried them too: the percentage of folks expecting more jobs in the near future dropped by 4 points to 13.1%, while those expecting fewer jobs rose nearly 5 points to 20%. This is going the wrong way.

For these folks, it boils down to jobs and income; and the expenses of a roof over their heads, education for their kids, healthcare, and so on. This is where the reality on the ground deviates from the rosy scenario that Fed & Co. have so carefully constructed for Wall Street.

But even in the Fed-nurtured financial markets, turmoil is beginning to spread, as the acrid smell of burned fingers wafts through the bond market. Read… How Much Worse Can the Junk-Bond Sell-Off Get?