Corn plunged another 4.66% today, with September futures hitting $3.73 per bushel, after having already plunged nearly 7% last week. Corn has gotten massacred. Since July 14, it has dropped 15%.

This chart shows its powerful but ephemeral breakout attempt that started in late June and collapsed on July 14. 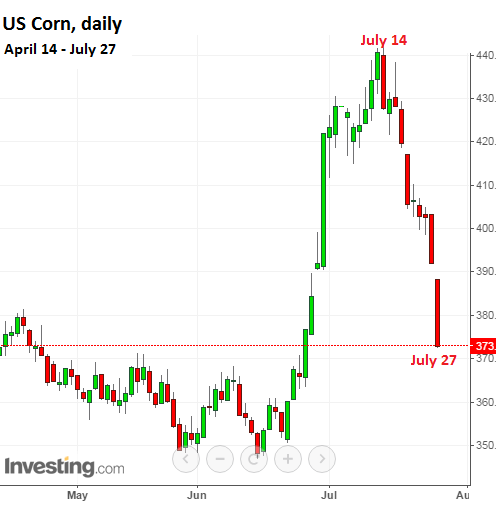 But it’s not like corn has been in a bubble recently. Corn farmers have been lamenting the crummy price they’ve been getting for their product for a while. In July 2012, corn soared to $8.25 a bushel. Whatever that was – a bubble or a reasonable price – it made everyone smile, from the bankers that were financing farmland to the smallest growers. But the fun didn’t last long.

This weekly chart going back to April 2012 shows the implosion of the price of corn, and the failed mini-breakout recently, circled in red because it’s barely visible. A horrendous ride down for US corn growers: 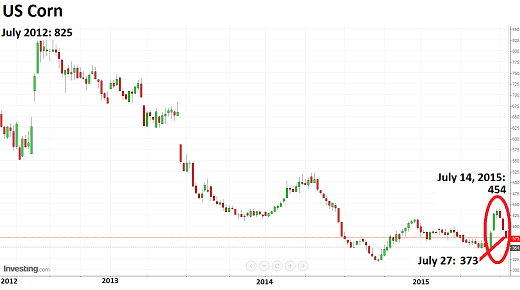 Corn isn’t the only commodity to get hammered. The Bloomberg Commodities Index dropped another 1.2% today, to 92.15, the lowest since the middle of the Financial Crisis.

So Christine Hughes, at OtterWood Capital in Canada, a country that is also getting hit by the plunge in commodities, posted this about the brutal year and its impact on US states. Note that the first chart below, as of July 23, doesn’t reflect the crash in corn over the last two trading days.

There has been plenty of focus on the drop in oil however the pain is also being felt in other commodities such as metals and agriculture. The chart below shows how brutal the year has been for commodities.

States more reliant on mining and farming (36% of Wyoming’s output depends on mining and agriculture for example) have been disproportionately hit. When we combine the increased unemployment from these industries with renewed layoffs and investment cuts in oil (as we explained here) it doesn’t paint a pretty picture for the US recovery. Although the weakness in these areas has been contained so far, it will need to stay that way for the US economic recovery to continue. Most importantly we will see if the deflation in commodities has any effect on the Fed’s planned interest rate hike this year.

Acrid Smell of Burned Fingers Wafts through the Bond Market. Read… How Much Worse Can the Junk-Bond Sell-Off Get?