Americans are an optimistic bunch when it comes to homes. Even in April 2006, at the peak of the prior housing bubble, with prices at insanity levels but with sales stalling as the market transitioned to its epic bust, and when everyone was trying to sell, even then 52% of Americans thought it was “a good time to buy a home.” That was the moment of peak pessimism in the history of Gallup’s data series. And it was truly a terrible time to buy a home.

In its annual April survey, Gallup asks: “For people in general, do you think that now is a good time or a bad time to buy a house?”

This time around, rather than climbing toward another peak, optimism has plunged 5 points to 69%, to the same level as in 2011. Only during the last housing bust did optimism fall below this level. It’s the steepest drop since 2008 when the housing market was tearing into the global financial system: 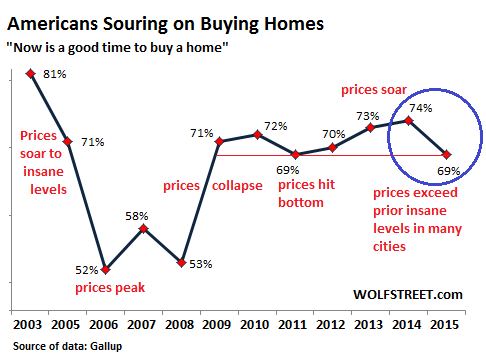 Gallup puts it this way:

The slightly less positive views of home buying may have been influenced by lackluster home sales earlier this year, as many parts of the country experienced unusually cold weather.

This winter wasn’t as bad as last year. And the thing is, optimism about buying a home has plunged the most in the West, which includes my beloved and crazy state of California, where the weather has been absolutely gorgeous, sunny, warm, and way too dry for our rainy season – ringing in the fourth year of what might turn into a catastrophic drought. But in the West, optimism has plunged 11 points from 75% last year to 64% this year.

However, in the Midwest, where there actually was some winter, optimism rose 2 points to 75%. In the East, despite the heavy snow in some areas, optimism edged down only 3 points, with 72% thinking it was a good time to buy. So clearly, it wasn’t the weather. It was the West that dragged down the figures.

Then there’s another question in the survey: “Over the next year, do you think that the average price of houses in your area will increase, stay the same, or decrease?”

It’s not like Americans envision the next housing bust: 59% expect home prices to rise, the highest level of optimism since 2006, at the peak of the housing bubble, just as things were coming unglued. And only 11% think home prices will fall, same as in 2006.

At the time – in April 2006, the very moment when the housing bubble was turning into the housing bust – 60% thought home prices would rise, still believing the media and industry hype; 27% thought they would stay the same, having apparently bought into the meme that prices might be plateauing briefly before moving higher. Even as chaos was beginning to tear into the market, only 11% thought home prices would actually fall, same as now. It was this tiny minority that got it right.

The optimism concerning prices was even higher in 2005, when 70% thought prices would rise over the next year. And they were correct!

In the West, home prices have skyrocketed from the bottom of the last crash. In many places, including the city of San Francisco, prices now far exceed the peak insanity levels of 2006/2007. And so in this environment, 76% think prices will rise further over the next year, while 17% expect prices to stay the same, and only 6% see declining prices. In terms of home prices, folks in the West are by far the most optimistic in the nation.

Yet, they’re the most pessimistic about this being a good time to buy.

In the East, only 46% think prices will increase! Another 17% think prices will decline, the most negative in the nation. Yet their optimism about this being a good time to buy (at 72%) is near the top. In the Midwest, 51% think that prices will rise, while in the South, 61% think so.

During the last housing bubble, the peak in prices occurred when Americans were totally souring on buying a home. They saw that these prices made no sense, that they were unaffordable, crazy, and artificial. And after they came to that conclusion in 2006, they stopped buying. Hence the crash.

Now a similar scenario is playing in the West. Prices have shot up to ludicrous levels in many areas. Fewer and fewer people – even with mortgage rates at rock-bottom – can afford to buy a home. And what they can afford to buy may only be a shack though both adults in the household have middle-class jobs. It appears that it’s gradually dawning on people that the party is drawing to an end, that the booze will run out soon, that it’s time to worry about a hangover. And they see the writing on the wall: now is a good time to sell instead.

They have their reasons. The bedrock of a healthy sustainable housing market has been undermined. And it’s dragging down the economy. Read…   Here’s What’s Killing the American Dream

37 comments for “Americans Suddenly Sour on Buying a Home, Worst Drop since 2008, Optimism Plunges in the West”