Wolf here: After any bubble, it’s always: “Nobody predicted the crash….” Central bankers don’t see bubbles. They’re not allowed to. At least officially, they don’t see them. And thus they can’t see the implosions coming. They can’t officially see these things because they help create them with their monetary policies.

Industry insiders and their financiers don’t see bubbles either because they get rich off them. Politicians and bureaucrats don’t see them because bubbles make them look good and bring in a lot of moolah.

But people do see the bubbles – which are huge and easy to see – and they do predict their crashes though they might not always get the timing right. Yet, they’re pushed aside and made the most unpopular folks around, and they’re expelled from the herd, and their warnings are ignored. It happens every time. And it happened during the Australian iron-ore bubble, whose spectacular crash suddenly “nobody was predicting.” Ha! Here’s Lindsay David:

Rinehart, “Australia’s richest woman” and “chairman of Hancock Prospecting,” as the article put it, is not the only mining head, politician, treasury employee, mainstream economist, or Reserve Banker “not” to predict the ore price crash. In fact, unless I am seriously mistaken, none of them saw the price crash coming. But they have indeed ignored all the warnings by those who did predict the crash in the spot price of iron ore.

As a clear example:

It’s no secret that back in early 2014, I made the prediction that the spot price of iron ore would breach below $20 per metric ton before the end of 2017. At the time, it was trading above $120 per mt. It’s currently trading at below $58 per mt. And in my opinion, this prediction is on track to eventually becoming a reality.

Back in May of 2014, I attended the “Australia in China’s Century Conference” where Andrew “Twiggy” Forrest was a panelist. Citing my research and concern that the price of iron ore could crash, based on the notion that the mining industry did not accurately calculate how much iron ore China would need in the future, I asked Mr Forrest in front of several hundred people, What if Australia made a bad bet on China? 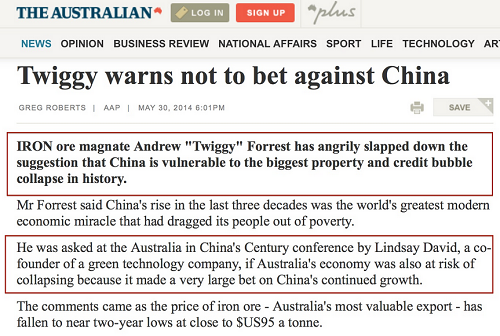 Mr Forrest’s response to my question was applauded by the audience followed by the majority of attendees, including federal politicians, frowning at my question, and making me the most unpopular attendee at the conference.

Firstly, its not like I was “not” trying to warn our mining executives of the mathematical screw-up they made. I wrote a book about it when the spot price of iron ore was well in excess of $120 per mt. But I did make it clear that the risks back at the time of the Australia in China’s Century Conference (when iron ore was down at $95 per mt) would be a problem “today” for iron ore producers. And these miners are at the early stages of experiencing a wealth of financial pain that will claim multiple victims. But the mainstream herd of the Bogan Empire simply chose to ignore my view, which was backed up by math.

My case is just one small example. However, I was not alone warning of the risk of a collapse in the price of iron ore. There were several of us bears raising the alarm bell. All of whom too were ignored.

Back in February 2013, if the leaders of the Bogan Empire had spared the equivalent income derived from selling 654 metric kilograms of iron ore and reinvested that cash into an annual paid MacroBusiness subscription, they would have noticed David Llewellyn Smith’s long list of outstanding reports where he uses data to illustrate the risk profile of the mining industry. These articles were obviously ignored by the mainstream herd of smart people in the Bogan Empire.

Today, it would now cost them more than 1,450 metric kilograms of iron ore income for the same paid subscription.

When diversity (all views) is ignored by the herd, that’s when troubles occur. It was mathematically only a matter of time before the spot price of iron ore would crash.

Unfortunately Australia’s banking and real estate sectors are too on track to witness the same catastrophic, yet incredibly predictable downturn the mining industry is only just beginning to experience. Since returning to Australia, I’ve quickly understood that using a calculator with some common sense seems to be a difficult procedure for Australians to undertake when the herd makes a mathematical forecast. By Lindsay David, author of Print: The Central Bankers Bubble

The Australian mining sector is screaming towards what may be one of the most colossal economic breakdowns in modern Western history. Read… Australia Runs out of Luck, Now Needs a Miracle