The US housing market has become a special creature. The government subsidizes it in a myriad ways, and more than ever. The Fed has repressed interest rates to ludicrous levels. This has given Wall Street a great opportunity to borrow hundreds of billions of dollars to buy up single-family homes and rent them out. Thus, PE firms have become the deep-pocket force at the lower end of the market. They’ve driven up prices and have become the largest landlords in the US. And they’re now selling a new kind of synthetic structured security – one backed by these rents.

Central banks in other countries have also created enormous credit bubbles, particularly in China, and those that benefited from it have been trying hard to take their money out of harm’s way, beyond the reach of their government, and invest it elsewhere, including in US homes. These folks have emerged as deep-pocket buyers at the upper end of the market.

As a result, home prices have soared since 2012. First-time buyers, the foundation of a sound housing market, have become scarce. Homeownership rates have plunged to multi-decade lows [The American Dream Dissipates at Record Pace]. Yet, mortgage rates have been so low for so long that no one can even imagine what it would be like if they went back to what was once considered “normal” levels.

And there’s another element of this special creature: while home prices have soared, incomes have not. In its report released today, RealtyTrac found that from 2012 through 2014, home price appreciation has outpaced wage growth in 76% of housing markets, with home prices ballooning by 17.3%, while wages creeping up a barely visible 1.3%: 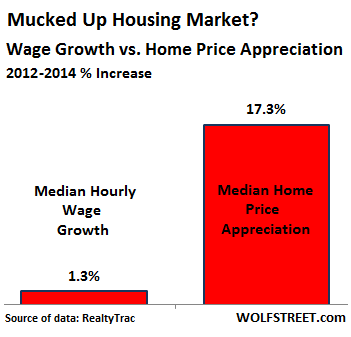 The data is based on average weekly wages from the Bureau of Labor Statistics and median home prices derived from sales deeds in 184 metropolitan statistical areas with a combined population of nearly 228 million.

Since 2012, home prices “have rapidly appreciated, particularly in markets attracting institutional investors, international buyers, or some other flavor of cash buyer not constrained by income as much as traditional buyers” – that’s how  RealtyTrac VP Daren Blomquist explained the phenomenon.

And here are some markets where home price appreciation outran wage growth: 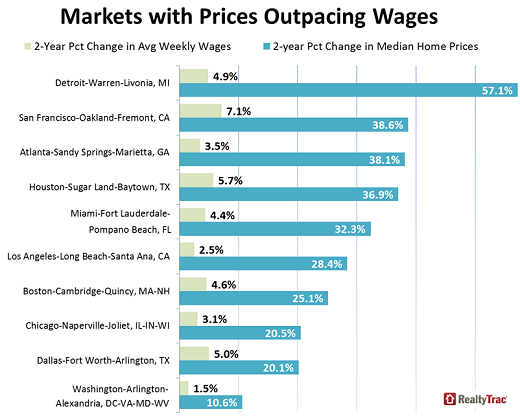 Note the number two on the list, the San Francisco Bay Area. Housing in the Bay Area has gone haywire…. According to CoreLogic DataQuick, sales in February plunged 11% from a year ago. It was the worst February since 2008, after an equally bad January, though the weather was gorgeous. The median price still rose 4.6% year over year to $565,000.

In my beloved and crazy city of San Francisco, the housing market has gone even more haywire. Home sales plunged 30% year over year, despite the gorgeous weather that was ideal for home buying, while the median sales price soared 16% year over year to $1,092,000. Imagine a so-so two-bedroom no-view apartment in a median neighborhood. That’s 34% higher than the median price at the peak in November 2007, which afterwards, as it was imploding, everyone called a crazy bubble. But this time, it’s different.

San Francisco is also the number two on another infamous list: on Brookings’ list of the most “unequal” cities. Brookings found that the 20th percentile in San Francisco earns $24,815 per year, while the 95th percentile has the highest income in the country at $423,171 per year. Who said the wealthy don’t thrive in a liberal city?

Overall, in 45 metro areas with a combined population of 63 million, home prices have outrun wage growth to the point where the median home price in December required more than 28% of the median income for monthly mortgage payments, according to RealtyTrac – hence “unaffordable by traditional standards.”

“The dynamics driving the affordability, or lack of affordability, have as much to do with the new global nature of real estate as much as they have to do with the speed of local wage acceleration,” explained Mark Hughes, COO at First Team Real Estate in Southern California. “Southern California will remain increasingly unaffordable from within, but a hot commodity worldwide,” he said.

This is what happens when the central-bank engineered and much desired “wealth effect” kicks in on a global basis. It opens up all kinds of possibilities, for those relative few who benefited from it, at the expense of the many who didn’t. That this sort of price boom isn’t sustainable is clear. Something has to give.

And there is a privilege rich foreigners have that Americans lack when buying a home in the US. It’s enshrined in the Patriot Act. Read… That’ll Kill the High-End Housing Boom in US Trophy Cities

9 comments for “Now What in America’s Mucked Up Housing Market?”