“We don’t see the economy being as strong as portrayed in the media.”

The manufacturing survey for March released today by the Kansas City Fed isn’t the most important manufacturing survey in the US. It covers the Tenth Federal Reserve District: the western third of Missouri; all of Kansas, Colorado, Nebraska, Oklahoma, and Wyoming; and the northern half of New Mexico. Not exactly large centers of manufacturing.

So the fact that the index plunged in March, after having been in growth mode for over a year, doesn’t say that much about the state of the overall US economy, which is mostly a service economy. It doesn’t speak volumes about US manufacturing either, though the plunge parallels other recent data. But the reasons cited for the plunge by the people who’re fighting it out on a daily basis in the trenches of American business are important – and we have seen similar reasons cited by the Dallas Fed.

The composite index – an average of the indices for production, new orders, employment, supplier delivery time, and raw materials inventory – dropped from +3 in January and +1 in February to -4 in March. This ugly trend looks like this: 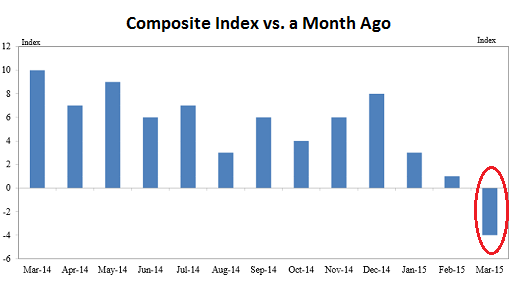 Note March last year at the very left. Makes you hope that the data for this March was a statistical fluke. But there was plenty of miasma flowing through the report, and a fluke seems unlikely:

Most price indices continued to decrease, with several reaching their lowest level since 2009. In a special question about the West Coast port disruptions, 32% of firms said it had affected them negatively.

Oklahoma, which has a significant dependence on oil and gas, got hit the hardest. But there were also “moderate slowdowns” in Kansas and Nebraska.

On a month-to-month basis, 12 of 13 sub-indices were negative, including the production index. The new orders and order backlog indexes “dropped to their lowest levels in over two years.” The employment index inched higher, but remained negative. Same with the new orders for exports index. Both the raw materials inventory index and the finished goods inventory index turned negative.

“Some firms blamed the West Coast port disruptions, while producers of oil and gas-related equipment blamed low oil prices,” summarized Kansas City VP and economist Chad Wilkerson. Ah yes, the oil bust. And the labor dispute, in which both sides held a gun to the nation’s head, which then backfired [read…  West-Coast Port Fiasco Does ‘Permanent, Irrevocable Damage’].

And here are the reasons for the plunge in manufacturing activity cited by the folks who’re fighting it out on a daily basis in the trenches of American business. Note the word, “hopefully”:

“We continue to produce to fill orders we have in house, but invoicing is down because customers are delaying shipments due to the large amount of snow in their yards. All of the suppliers have sent notices of a raw material increase. If those are implemented, our projections will come to a grinding halt.”

“The drop in oil prices is negatively impacting our business levels. We do not see the economy being as strong as portrayed in the national media reports.”

“Due to the port disruption, we are diverting as many containers to East Coast ports as possible.”

“We are still hiring and operating at full capacity, but the flow of new orders for delivery in 2016 has significantly slowed. Hopefully, this trend will improve as the oil & gas producers deal with their excess production issues.”

“The low price for oil is taking its toll on the demand and price for energy related products we offer. Momentum we experienced earlier this year has left, and we are again cost cutting and becoming lean. Our capital expenditures are focused on removing labor content in our processes and products due to the high cost and risk added by regulation and administrative action.”

“With the strong dollar, we keep continuing to see a flood of low-priced imports, thereby reducing our margins.”

“Because of the West Coast port disruption, parts are tied up in transit that are several weeks late. Production lines have been shut down for days at a time and we have had customers cancel orders. We will not regain that business when the raw materials come in and in fact have lost some customers.”

“The increase in health premiums has been offset by other benefit cuts and labor cuts.”

Things like a focus on “removing labor content” from products or “benefit cuts and labor cuts” are bad news for the local economy. I hope that the good folks in the Tenth District, especially in Oklahoma, the workers and business people and entrepreneurs and car dealers and the local banks make it through the oil bust alright, unlike the last time. But hope isn’t a very good strategy. And there are parallels beyond energy in the broader US economy.

In that broader context too, Wall Street’s promise of “Escape Velocity” becomes a joke. Read…  US Economy Heads Toward Zero Growth in Q1