It’s hard to measure the growth rate of a vast, complex economy with just one number, accurately, and on a timely basis.

The Chinese found an ingenious solution. They decree the growth rate and announce it in advance, and that’s about what the number says when it comes out. It’s faster than any other major country can produce its GDP numbers. It avoids nasty surprises and doesn’t need messy revisions. Whether or not establishing statistical data by decree is an accurate reflection of reality is a hotly disputed topic.

But then, the accuracy of any statistical data is a hotly disputed topic.

In the US, it’s a slog to get to the final answer. Quarterly changes in GDP, as measured by the Bureau of Economic Analysis, come in a series of estimates. The first estimate gets all the press, but subsequent revisions in the second and third estimates can be significant. Further revisions follow over the years. By the time the BEA has a fairly good handle on what actually happened back in the day, no one cares anymore.

So the Atlanta Fed started a new approach in 2011. The forecasting model is supposed to reflect a more immediate picture of the economy. Taking into account economic data when it is released, the model adjusts its GDP forecast accordingly and closer to real time. It has plenty of quirks. It’s jumpy as it reacts to incoming monthly data that is itself highly volatile and subject to revision. But it’s a good indication of where the economy has been going over the past few months.

And according to this “nowcast,” as the Atlanta Fed calls it, the economy is going to heck.

The economic reports that filtered into the model over the past few months ranged from mediocre to very lousy, with the exception of the jobs reports, which were considered “robust.” The most recent set of reports, released over the last few days, dragged the GDPNow forecast to an annualized growth rate of a near-zero 0.3%. A couple more crummy reports, and this may turn negative.

The blue area in the chart below is the range of the so-called Blue Chip consensus forecasts. Now even the most pessimistic among these forecasters are way too enthusiastic, though they’re also dialing down their exuberance: 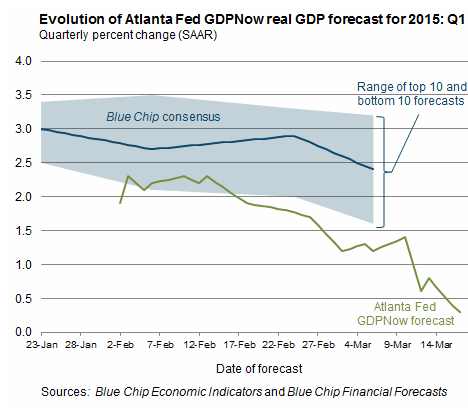 Turns out, the oil bust is being felt despite assurances last fall from our preeminent economic gurus, who’d postulated that the oil bust – the lower price of gasoline – would act like a stimulative tax cut. Which I have been debunking ever since they first brought it up. It was one of the simplest things to debunk. It was just basic math.

So today, the Atlanta Fed specifically mentioned drilling activity in the oil patch, as measured by the collapse in the count of drilling rigs [a historic cliff dive; read… The US Oil Bust Just Got Worse].

This collapse in drilling activity knocked the category, “investment in structures” down from an already terrible negative growth rate of -13.3% to an even worse -19.6%. These non-residential investments in structures are important factors in GDP. And one of the most prolifically investing sectors in recent years, oil drillers, has been slashing these investments. Drillers are trying to make their cash flow less negative so that they don’t run out of money before the bust is over. They want to survive.

Investments in residential structures also deteriorated from a growth of +0.1% to a decline of -3.2%. And goods exports skidded further.

So this is what the eternal promise of “escape velocity” looks like when it collides with reality in real time. Wall Street keeps holding up the promise that “escape velocity” would soon be reached in order to rationalize irrational stock prices. It has worked wonderfully for six years. Stocks have soared, while “escape velocity” has remained a false promise. But now we have in fact “escape velocity,” only this one, at least for the moment, is headed in the wrong direction: it’s headed south.

And there are deeper problems: a sudden Lehman-Moment-like spike, but worse than in October 2008. Read…  Last Time This Ratio Spiked, Stocks Crashed