The budget of my beloved and crazy State of California is dependent on capital gains taxes. They kick in when the stock market is booming, when IPOs fly off the shelf, and when dubious stocks quintuple in short periods. Capital gains taxes gush into the state’s coffers when flipping homes is so hot that folks listen to radio shows to learn how to get rich quick that way and when founders and employees of startup companies pocket millions or even billions in imagined or real gains as their cash-burning outfits take on multi-billion-dollar valuations or are acquired by Google, Facebook, or Yahoo for mind-boggling amounts. The bigger the boom, the more magnificent California’s capital gains tax revenues.

So now, California is projecting a “surplus” for years to come, and legislators are fighting over how to spend it. But the $2-trillion economy, the eighth largest in the world ahead of Italy and Russia, isn’t always blessed with asset bubbles. Twice in its boom-and-bust history, California has been incapable of paying its bills, most recently in 2008, when it escaped default only by mailing fancy-looking IOUs to suppliers, instead of paying them with real money.

But even with this manna currently raining down, California ranks as America’s 7th worst “Sinkhole State,” as the State Data Lab, a project of Truth in Accounting, calls them. It figures the taxpayer burden in each state by adding up the outstanding state debt, such as bonds, and the amounts that these states have promised to pay but haven’t funded yet, such as pensions and retiree healthcare benefits – the “unfunded liabilities.”

That these “unfunded liabilities” can bite viciously in all directions has been made clear by the municipal bankruptcies of Detroit, MI, Stockton, San Bernardino, Vallejo (all three in California), Jefferson County, AL, and others.

But taxpayers in six other states are far worse off in terms of these liabilities than we are in California. The taxpayer burdens in Connecticut and Illinois weigh over twice as much on each of their respective taxpayers as the burden in California. By comparison, the profligate state of California is practically a paragon of fiscal rectitude. So based on data by State Data Lab, here are the 10 worst “Sinkhole States”: 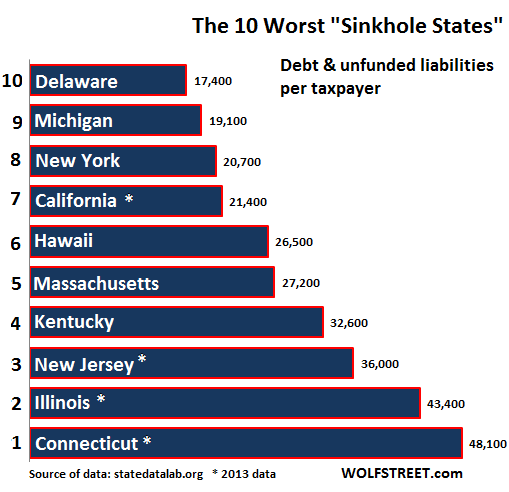 The average for all states is $6,492 per taxpayer.

These sums are particularly grisly in light of the US median household income of $53,900. This median household has more than one taxpayer. So for example, in Connecticut, the burden on a household with two incomes, and thus two taxpayers, is $96,200.

States like California are required to have a balanced budget. So every year, they sort of balance their budgets, and sometimes they even have a “surplus.” Yet, states have a “wall of debt” – as California Gov. Jerry Brown called it – that just keeps growing despite the requirement for “balanced” budgets. And this “wall of debt” conveniently doesn’t even include the unfunded liabilities that are so huge that no one knows how to deal with them. So they’re swept under the rug until something blows up.

“Gimmicks,” “accounting tricks,” and “shenanigans”: that’s what State Data Lab calls the methods elected officials use to “balance” their budgets without including the funds for promised pensions or retiree healthcare benefits (you can check on your own state here).

Some folks are trying to assuage our concerns by claiming that unfunded liabilities don’t matter because all these promises that have been made over the years to buy votes aren’t all coming due today, that not everyone is going to retire right now, and that not all retirees are going to get deadly sick this very minute. But then, not all bonds have to be redeemed all at once today either.

These are liabilities that have to be dealt with in the future, one way or the other, even if they’re artfully kept from showing up in the already high “wall of debt.” Something taxpayers can look forward to fondly.

The government purposefully announced it Friday afternoon when consumers aren’t supposed to pay attention. Read… US Government Plans to Bail out Oil Industry, Consumers to Pay

10 comments for “The 10 Worst “Sinkhole States” in America”