Natural gas in the US is a curious creature. Unlike oil, it is not a globally traded commodity. North American production is landlocked, with practically no LNG export possibilities at this time, though big dreams are in place to make that happen, and many billions of other people’s dollars have been sunk into these dreams.

Gas exports via pipeline to Mexico have been growing as additional pipeline capacity went into service over the last two years. Mexico is switching power generation from its own oil to cheap US natural gas. This allows it to export its more valuable oil to the US. But building gas-fired generating capacity is a slow process, and these exports to Mexico are relatively minor in the overall scheme of things.

The US also exports natural gas to Canada. But it imports more from Canada than it exports to Canada and Mexico combined. Hence overall, the US remains a net importer of natural gas.

So the rest of the world has no impact on the price of natural gas in the US. There were times when LNG sold for eight times more in Japan than it traded for on the NYMEX. This cordoned-off market is a favorite playground for the Big Money because it’s relatively easy to push it one way or the other to one’s liking.

And natural gas is a near-term bet on the weather, except when it’s not. So everyone is prodding their weather gurus to predict the temperature over the next few days and weeks: if the next cold-wave would be big enough to jack up demand for heating purposes, or if the next heatwave would force power generators to burn through vast quantities of gas so that folks can max out their air conditioners.

Head fakes, unexpected plunges when it should rise, inexplicable rises when it should plunge, and whiplash-inducing but otherwise mysterious turnarounds are normal. And once every few years, there is a panic that can last for weeks or months, whipping up dizzying spikes.

But over the last seven weeks, the forces have combined, and shorts have piled in as others have bailed out in desperation, and the price plunged, though this is the time of the year when natural gas normally rises, and often by a lot, due to heating demand. But a few warmer days early in the winter and surging production were the signal to go short, and short they went. Over the last seven weeks, they pushed down the price by 40%.

But it must have been one of the most crowded trades around. And Thursday is coming up…

Every Thursday – except during holiday weeks when it may fall on a different day – a potentially heart-attack inducing event happens: the EIA releases the weekly inventory report. It can be a big market mover. And especially after the recent plunge, it seems the shorts, all stepping on each other in this immensely crowded trade, didn’t want to go into this together, hand in hand, and jointly jump off the cliff. So they jumped individually ahead of time, while they still could, and it created an epic short squeeze.

On Monday afternoon, in electronic trading on the NYMEX, natural gas traded at $2.80 per million Btu. At the time, the Wall Street Journal observed, “Natural Gas Drops to Two-Year Low as Forecast Warms Up.”

But Tuesday morning at 10 AM, after some ups and downs overnight, it bounced off $2.83/mmBtu, and the Big Squeeze started. It hit $2.95 by 2 PM and more or less maintained that level through much of the night. By 5:30 AM today, it breached the $3.00 level and then began its stupefying ascent, plowing higher and eating shorts as it went, and they were trying to get out from under their bets as fast as they could. Now as I’m writing this after-hours, it just ticked up to $3.33/mmBtu. 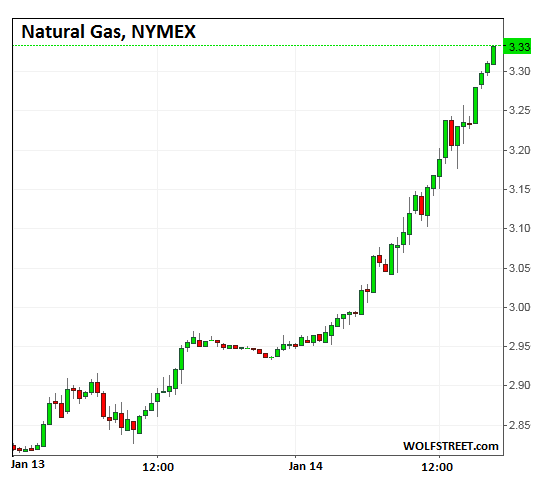 And here is our miracle commodity over the past six months in daily increments. Given the last two days, Natty has done great so far this year, up nearly 18%. But even the monster move of the last two days only brought the price back where it was on December 22, a time during which it was in freefall. Note how fast and far it plunged since November 20: 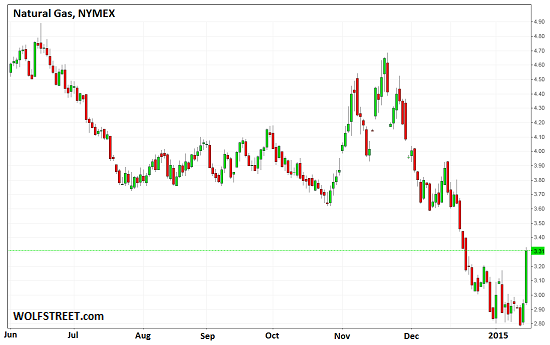 And here is a 12-month chart in weekly increments. It depicts the polar-vortex-induced ramp-up last winter, and the brutal plunge that followed. 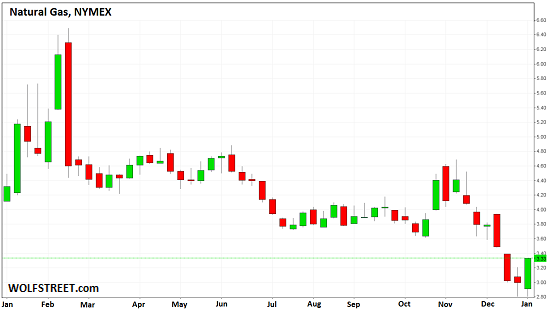 Whatever oil is going to do – and it too made shorts nervous today, but it jumped “only” 5.9% – US natural gas is going down its own path for its own reasons. Neither OPEC nor Russia nor slowing growth in China matter. What matters are the nerves of the traders, or more importantly the programming of the algos, along with weather, demand, production, storage, and a million other things, all in the US. And for those who trade it, it promises a lot of premature gray hairs.

Last time this happened in the oil patch, the stock market crashed. “Going to be a painful period of time,” is how Texas Gov. Rick Perry explained the situation. Read…  This Is Just the Beginning of the Great American Oil Bust

10 comments for “Shorts Jump off Cliff? US Natural Gas Soars 19% in Two Days”