“The ruble weakened to a record for the fifth day on concern Russia will quicken its move to a free float after more than $20 billion of interventions this month failed to halt the depreciation,” Bloomberg reported today, the same sort of line we’ve been seeing for weeks – in an environment when all major central banks have declared currency war on each other.

The dollar has been methodically devalued ever since the Federal Reserve System was created to manage it 100 years ago. Beating down the dollar in an orderly manner is so ingrained no one even questions it. They call it “price stability of 2% inflation.” Other central banks try to keep up. The result is a race to the bottom: whoever gets there first wins. But ironically, you have to try to get there slowly. If not, mayhem breaks out. The good thing is, currencies have no real bottom, and the race can go on for a long, long time.

In that environment, the ruble has been among the winners recently. We’re even told why: “The sanctions bite,” or something to that effect.

But initially, in a nasty surprise for policymakers in the EU and the US, the ruble didn’t plunge when US and EU sanctions were being bandied in March in response to the Ukrainian fiasco. The ruble actually rose against the dollar for nearly four embarrassing months.

June 26, the party ended. On that propitious day, the sanctions suddenly began to “bite,” as the media likes to say, and a sharp decline began. In late August, it pierced its record low set in February 2009, during the financial crisis. It continued stair-stepping down from one record low to the next. Since June 26, the ruble has plunged 20.5% against the dollar. 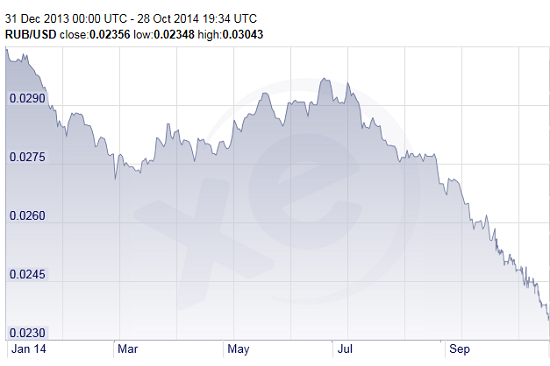 A major reason for the decline: Russians have been selling rubles and buying foreign currencies. A big part of which ends up overseas, beyond the reach of the Russian government. Capital flight may hit $120 billion in 2014, according to government estimates, and more according to others. But some of the foreign currency stays in Russia: bank deposits in euros and dollars have jumped 17% for the first eight months of this year.

As during the financial crisis, Russians are trying to protect their wealth. Somewhat inconveniently, they haven’t yet forgotten the immensely painful lesson that the ruble’s complete post-Soviet annihilation had taught them. As they’re selling rubles and buying foreign currency, the ruble gives in under the pressure.

Russians don’t have a lot of confidence in their banking system to begin with. In the first half of 2013, 41% of these prudent folks agreed with the statement: “I do not trust banks, they never tell the whole story.” The survey by Synovate Comcon (Ipsos) found that in the first half of 2014, this distrust jumped to 47%. And to 54% for those who lost the most during the ruble’s annihilation, the folks now between ages 55 and 75 – in a country where the average life expectancy for men is age 64!

The US and the EU have been taking credit for the impact of the sanctions. They want these sanctions to bite. And the decline of the ruble, among other difficulties now unfolding in Russia, has been a welcome sign.

But the ruble’s sudden decline isn’t anything unusual: 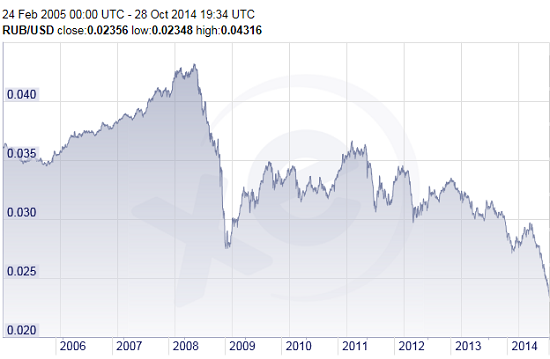 The chart, going back to 2005, shows how the Russians reacted to the financial crisis: they dumped their rubles and bought foreign currency. The ruble plunged 36% from July 2008 to its financial-crisis bottom in February 2009.

While the ruble recovered partially after the financial crisis, it lost its footing again in 2011. From early May that year, interrupted by some sharp rallies, it has dropped 36% against the dollar through today.

It puts the recent plunge in perspective. The sanctions and counter-sanctions have an impact, it would seem, but the ruble hasn’t been exactly a hard currency: from July 2008 through today, it lost 45% of its value against the dollar, which itself lost 10% to inflation.

So this month, the Central Bank of Russia has been selling $20 billion of its stash of foreign currency and buying rubles to mop them up and relieve some pressure. But rather than trying to stop or reverse the ruble’s decline, the Central Bank appears to be managing the decline. A sudden crash of the ruble could have chaotic consequences, while an orderly decline in the middle of a currency war might not be the worst fate.

There are many losers when a currency gets devalued, but that hasn’t stopped the Fed or any other central bank. They’re beyond this sort of thought. They’re managing a currency! And there is only one direction into which they manage that currency: down. In that respect, Russia is just now winning the currency war. Even if it doesn’t want to.

A threat hangs over the EU: that Russia, pushed to the edge, could stop the flow of natural gas. Eurocrats claim that it wouldn’t be such a big deal, that no one would be without gas. But a leaked report from the German government explains that it would wreak havoc on German industry. Read…. LEAKED: What Happens to Germany if Russia Turns off the Gas

4 comments for “Russia Wins the Currency War, Even if it Doesn’t Want to”