Is the blindingly magnificent housing bubble in Canada running out of steam? Even the US housing bubble that imploded so spectacularly, pales by comparison. It’s so big and so all-encompassing that even the Bank of Canada and ratings agencies publicly fret about the damage it might do to banks, and the entire financial system, when it meets its maker.

But in September, mortgages rates dropped once again to near historic lows, and home sales jumped to the highest level since February 2010. The Teranet–National Bank National Composite House Price Index inched up 0.3% from August – what it calls “national house price inflation,” a refreshing bout of honesty that their US counterparts would never dare to display. This “national house price inflation” was 5.4% year over year. 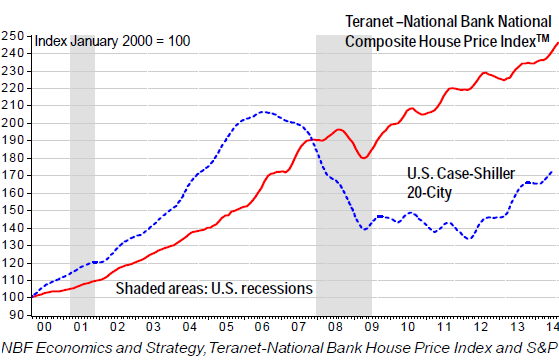 So the Bank of Canada is publicly worried that the housing bubble is so vast and households so weighed down with debt that a “sharp correction in house prices” could take down the financial system. Read…. Is Canada Next? Housing Bubble Threatens ‘Financial Stability’