Canada’s truly magnificent housing bubble, incomparably more magnificent than the housing bubble in the US that blew up with such spectacular results, is starting to worm its way into all sorts of venues. And on Tuesday, Bank of Canada Deputy Governor Agathe Côté had a special place for it in her discussions of “vulnerabilities and risks” to the “stability of the financial system.”

Home prices in Canada rose more moderately than in the US during the crazy go-go years from 2000 until the financial crisis: in the US they more than doubled in that period, according to the CaseShiller Index, while they rose “only” about 70% in Canada, based on the Teranet–National Bank National Composite House Price Index. 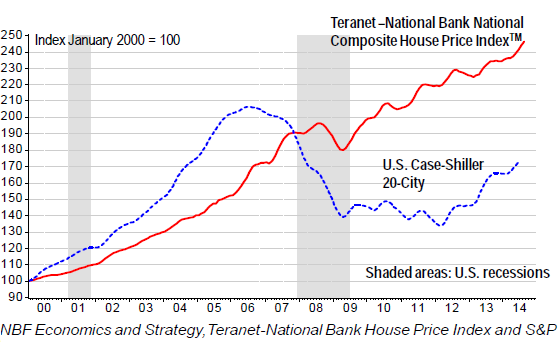 Ratings agency Fitch warned about the Canadian housing market in July. It was “20% overvalued in real terms,” based on Fitch’s own metrics, the report said. Had they looked at the above chart, they’d have come to the inescapable conclusion that it was 100% overvalued in real terms. Home-price bubbles are treacherous: “High household debt relative to disposable income has made the market more susceptible to market stresses like unemployment or interest rate increases.” That household debt to disposable income ratio has been hovering at near a record 164%.

Low interest rates have been heating up the market. Fitch’s solution? Keep interest rates near zero, obviously. Forever. Period. Because raising them would prick the bubble, and its implosion would trigger all sorts of mayhem.

Now Bank of Canada Deputy Governor Agathe Côté weighed in on the housing bubble. It’s on everyone’s mind. In a speech to the Chamber of Commerce and Industry of Saguenay, Quebec, she discussed among other things, the four key responsibilities of the BOC – monetary policy, the financial system, the currency, and funds management.

The housing bubble falls under the key responsibility of managing the financial system, or more precisely under the objective of promoting its “stability and efficiency.” As part of its Financial System Review, the BOC “assesses vulnerabilities and risks.” Among the four “important risks” in her presentation:

If those two occurred, all heck would break lose due to the factors Fitch had already pointed out. Home prices have skyrocketed, far outpacing household incomes. This chart from Côté’s presentation shows the very ugly growth of the house-price-to-disposable-income ratio. Since 2000, it has relentlessly soared, as home prices are placing an ever larger burden on household finances: 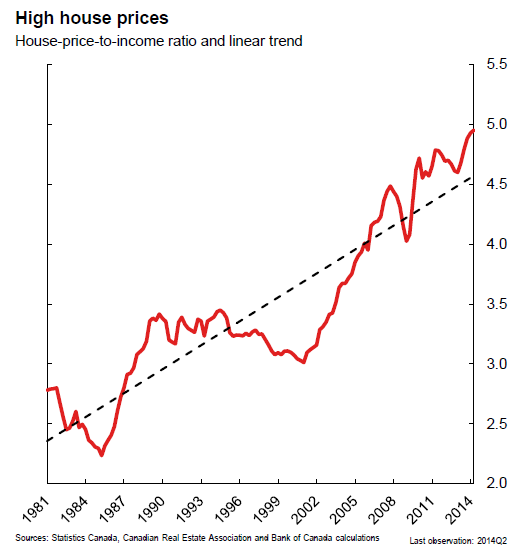 Given the lagging incomes, households have made up the difference with debt, and they’ve gone on a phenomenal borrowing binge, and their indebtedness in relation to their income has skyrocketed. The chart below shows the debt-to-disposable-income ratio, which doesn’t leave households, and by extension lenders and the entire housing industry, any room to breathe once home values begin to descend back to earth. And there’s no trace of deleveraging in sight: 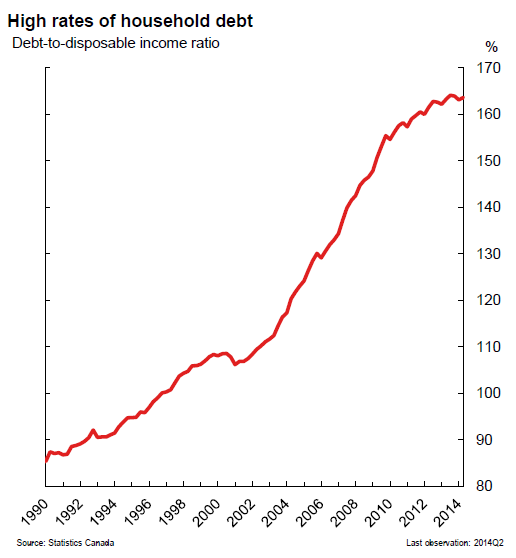 Now imagine what even just slightly higher interest rates would do to households barely able to shoulder this mountain of debt, and what they would do to home prices as demand would be systematically strangled.

That’s why Fitch was hoping that additional regulations by the federal government, instead of interest rate increases, would cool down the market. Some of it already happened, including shortening amortization periods to 25 years from 40 years and tightening the eligibility for government-backed mortgage insurance. In this manner, Fitch said, the government should try to “engineer a soft landing.”

Bubbles don’t land softly. They implode. It’s a brutal process. The longer bubbles are maintained, the more brutal their implosion. Housing bubbles are particularly vicious: they’re accompanied by a construction boom, which contributes enormously to the economy in myriad direct and indirect ways – from well-paid construction jobs to pickup truck sales. It was the collapse to the construction boom in the US that took down the Main Street economy, not the shenanigans blowing up on Wall Street. And the housing bubble in Canada puts the US housing bubble to shame. Hence the BOC’s public fretting about financial instability.

In the US, our new housing bubble has already run into trouble. Investors caused prices to balloon, but now prices are too high for investors. What’s left is a toxic mix: dropping sales, still rising prices, and ballooning inventories. Read…. After Mucking up Housing Market, Investors Flee

15 comments for “Is Canada Next? Housing Bubble Threatens ‘Financial Stability’”