One of the most important goals of Japan’s newfangled, democratically elected economic religion is to stimulate the economy for Japan Inc., if for no one else, by boosting exports (by making them cheaper overseas) and curtailing imports (by making them too expensive in Japan). To get there, Prime Minister Shinzo Abe and the Bank of Japan have agreed to water down the yen, and thus the wealth and earnings power of the Japanese.

To execute that noble strategy, the BOJ went on a money printing binge. It worked: the yen has dropped over 30% to the dollar since the election campaign in late 2012. It accomplished all sorts of goals: the yen-denominated wealth of the Japanese was cut by over 30%, real wages were cut as well, the economy is in shambles….

The one thing it hasn’t accomplished is the original goal of increasing exports and lowering imports, thus creating that all-important trade surplus that would goose GDP and make Abe and the Bank of Japan smell like a rose. The Ministry of Finance sprinkled salt on the wound today with the trade statistics for August.

Exports, instead of soaring due to the watered-down yen, dropped 1.3% from a year ago to ¥5.7 trillion. Imports edged down 1.5% to ¥6.7 trillion, mostly due to petroleum imports, the largest category, which fell by 5.2% based on the lower price of oil on the world markets. This alone contributed 0.9 percentage points to the 1.5% drop in imports. The other factor: consumers, squeezed by higher prices and declining real incomes, have been curtailing consumption. As a result, the goods trade deficit inched down 2.4% to ¥948 billion.

For the first eight months, compared to the same period last year, the trade deficit soared 39%! Here is what the impact of Abenomics on trade looks like, boiled down to one chart: 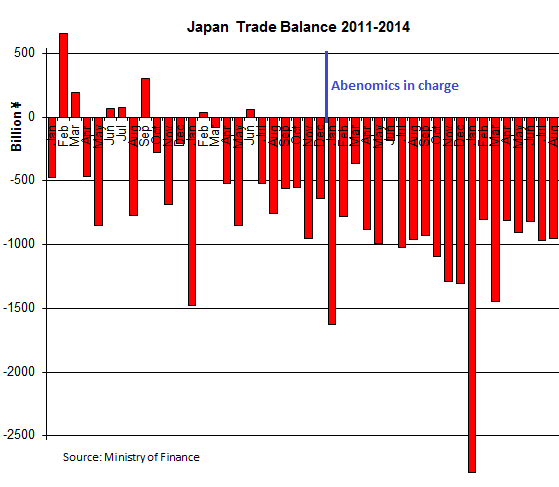 The report also points at struggling economies: Exports to all other Asian countries combined declined 0.6% year over year. That includes declines of exports to China and Hong Kong (-0.2% and -1.6%), South Korea, which has announced a stimulus package to counter the slowing economy (-6.1%), Thailand (-4.3%), and Indonesia (-14.8%).

The trade deficit is a consequence of offshoring by Japan Inc., for two reasons: the search of cheap labor and a desire to be closer to their customers. That shift lagged behind the efforts in the US, but accelerated after the 3/11 earthquake and tsunami, when supply chains in Japan collapsed. Abenomics has given Japan Inc. new incentives to offshore: the watered down yen allows them to translate profits from foreign operations into weaker yen, thereby performing miracles on their financial statements. So the trade deficit will remain a drag on the economy.

2 comments for “Miraculous Impact of Abenomics on Trade, in One Chart”