Wall Street’s and the media’s attention was riveted single-mindedly on whether or not the Fed would include in its statement the two words, “considerable time,” the two vaguest, stretchable latex words available that describe absolutely nothing and leave the door wide open for wishful thinkers of every stripe. That’s what the Fed’s gyrations since the financial crisis have so successfully accomplished; they have reduced the market, a place of price discovery, to a crummy joke.

The Fed delivered those two words, but during the press conference, Fed Chair Janet Yellen doused them with so many qualifiers that they’ve become even more meaningless, if that were even possible.

Wishful thinkers still see Yellen as a pure dove, while others worry that she has turned into a closet hawk who is afraid of letting this tsunami of free liquidity inflate asset bubbles and build up risks so immense that even a minor hiccup would bring down the entire financial system once again. And this time, under her watch.

Clearly, FOMC members, and particularly Yellen, would try hard to dodge blame. But after having printed $3 trillion, and after having forced short-term rates to near zero – and below the rate of inflation – for what likely will be more than six years, and after having messed with the markets throughout, they too can imagine that blame for the fiascos these policies might end up causing will be hard to dodge.

But beyond its crummy joke, the Fed has done something else: it has removed “Escape Velocity” – the economic surge in the US that has been falsely promised for five years in a row to rationalize soaring stock prices – from its vision of the future.

While they were at it, they cut the GDP growth projections for 2015 to a central tendency of 2.6% to 3.0%. For 2016, they nudged it down to 2.6% to 2.9%. For 2017, they figured it would languish at 2.3% to 2.5%. And in the “longer run,” GDP growth would even be below that. Here is what the slow-growth economic future of the US, as seen by Fed policymakers, looks like, after $3 trillion in QE and so many years of ZIRP that investors can’t even imagine what life might be like once the cost of capital is actually a decision-making factor again: 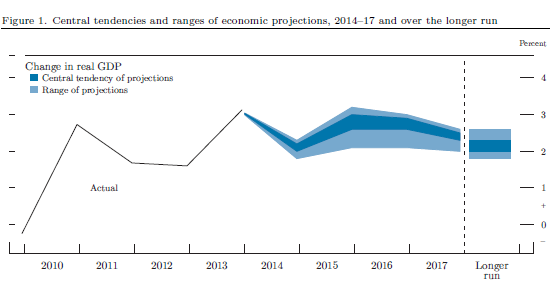 Next year, the economy might touch 3%. It would be the fastest growth for years to come. It would be peak growth. And Escape Velocity, that big economic acceleration that has been promised for years? Gone from the future.

That doesn’t mean that Wall Street stock-hype mongers might not trot it out again as a prediction of what will happen next spring, as they have done every, but the Fed isn’t seeing it.

Alas, as in the past, the Fed’s GDP projections for years out will be cut further as reality approaches. And the possibility of a recession or worse does not – and will never – figure into the Fed’s projections. Policymakers know only how to figure positive growth, at least in public, though they’re gradually learning how to project the pathetically slow growth that has resulted from their very own policies.

While the Fed is getting less optimistic, CEOs get “gloomier,” a word that inconveniently shows up to describe their outlook. Read… CEOs Darken Outlook, Slash Hiring and Cap-Ex Plans – Hope Now Focused on Share Buybacks (which just Plunged)