You’d think the housing market is in fine shape, based on the sizzling optimism of the National Association of Home Builders, which just released its Housing Market Index. It rose to 55 in August – above 50 means more builders view conditions as good than poor – the third month in a row of gains, and the highest level since January.

All three components of the HMI rose: current sales conditions to 58; future sales (that’s where hope thrives) to 65, the highest since August 2013; and traffic of prospective buyers (that’s where reality is nagging) to 42. OK, so foot traffic was crummy. But in the prior month, it was 39, even crummier.

That all three components rose three months in a row “is a positive sign that builder confidence appears to be firming following an uneven spring,” said NAHB Chief Economist David Crowe. This feat was due to “sustained job growth, historically low mortgage rates, and affordable home prices, which are helping to unleash pent-up demand.”

Yup, “affordable home prices” and “pent-up demand!” Not to mention “sustained job growth,” of jobs that pay enough to buy a home. 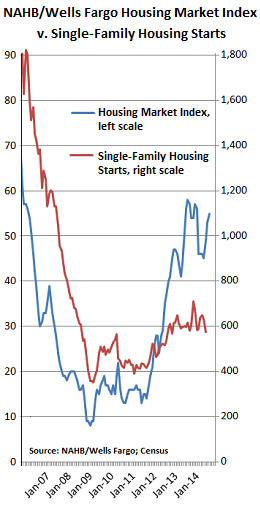 Home builders have become an optimistic bunch in 2012. As housing starts were ticking up a smidgen, builder optimism as measured by the HMI began to surge, and except for a couple of dives, including during the harsh winter this year, has continued to surge. As the chart shows, the HMI (blue line, left scale) has soared even as the puny growth in housings starts (red line, right scale) petered out in 2013. And starts remain mired down at about one-third of the level where they’d been at the peak of the last housing bubble.

But the NAHB’s electronic ink wasn’t even dry, so to speak, when the ever optimistic Fannie Mae, the bailed-out government mortgage giant, came out with its August 2014 forecast, in which it took a sledgehammer to its prior forecasts.

Home sales have been plunging for months, after post-crisis optimism peaked mid last year. And Fannie Mae is belatedly adjusting to an ugly reality.

The current forecast is about flat with the 429,000 units actually sold last year. But this is only August. There are four more months to go, and at the current rate of slashing forecasts to bring them in line with reality, it doesn’t look good for the year.

Fannie Mae then took its sledgehammer to its forecast of existing home sales. Only 4.91 million units will change hands this year, it said, down from 4.97 million in July, down from 5.18 million in January, and down from 5.26 million in August last year. The current forecast is already 3.5% below actual sales last year.

The “disappointing housing activity” so far this year led Fannie to downgrade the outlook for housing, Duncan explained. “We currently estimate that 2014 will finish lower in total sales figures than 2013.”

Construction is a large, labor-intensive contributor to GDP. That’s why construction bubbles goose jobs and GDP. And when they burst, they wreak havoc on the real economy, unlike financial bubbles. Existing home sales contribute less to the real economy, but are still important. And Fannie just shot down any remaining notion of housing being able to pull its own weight. Despite the optimism of the home builders, housing is reverting to its status as being a drag.

But without booming housing construction, the US economy would have to perform a miracle to reach “escape velocity.”  And miracles are rare in our modern world. But then, there’s always “next year.”

There’s a fundamental reason behind the housing drag: Homeownership hit the skids when homes became a highly leveraged asset class, flipped and laddered by speculators, rather than lived in by normal folks. Read….. Here’s the Chart that Shows Why the Housing Market Is Sick