The American public is astute about a lot of things, but the stock market – despite all the hoopla in the media and even on NPR – apparently isn’t one of them. That’s what the Wells Fargo/Gallup Investor and Retirement Optimism Index survey found.

And it raises some thorny issues about the Fed’s strategy to print a few trillion dollars and force interest rates down to near zero in order, as it said, to inflate stocks and other financial assets, thereby triggering the “wealth effect,” which would stimulate the Main Street economy. This is, of course, precisely what has not happened. And the American investing public just told us why.

The survey asked American investors with $10,000 or more in stocks, bonds, mutual funds, or in a self-directed IRA or 401(k) – so not the entire American public but only those who have a stake in the markets – to comment on a number of basic topics, but here’s the one that stuck out the most:

As far as you know, how did US stocks perform on average in 2013 – did they increase in value, stay about the same, or decrease?

It so happened that in 2013, the S&P 500 chalked up a total return, including dividends, of over 32%. It was the most phenomenal year since 1997, when it had zoomed up 33%. So it’s not exactly a common event. And it should have entered into the consciousness of the investing public who’d presumably benefitted from it. But it didn’t.

A mere 7% of the investors got it right. 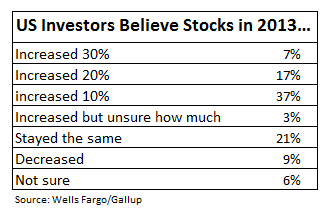 One can only imagine how the overall American public, including the tens of millions of folks who’re just scraping by and have zero stake in the financial markets, would have performed on the pop quiz.

The survey made clear to the respondents that it was about the stock market, not their personal portfolio. But could people really distinguish? Wouldn’t it impact their judgment about the overall market if their 401(k) had been whittled away by fees and bad decisions whose holes weren’t papered over with new contributions? Maybe. But in the statistics, they would have been overpowered by the other investors who watched their statements gain weight during the course of the year.

So then the survey asked directly how knowledgeable they were about investing in the market. Thankfully, only 11% described themselves as “highly knowledgeable,” but 56% thought they were “somewhat knowledgeable” though almost none of them could pinpoint one of the most basic facts of investing, namely how much stocks had soared last year. And 33% were honest, considering themselves “not knowledgeable.”

Whatever this survey says about American investors with more than $10,000 in the financial markets, it speaks volumes about the Fed’s favorite policy goal, the “wealth effect.”

The Fed claimed that by inflating asset prices, it would make Americans feel wealthier, and thus induce them to spend more money, which would crank up the Main Street economy and solve all problems. OK, sales of luxury goods, expensive cars, corporate jets, yachts, and the like responded very well. Sales of other goods not so much.

The Fed has known about this all along. It knew that the wealth effect would do nothing or very little for most Americans who were much more impacted by the concomitant reduction in real wages. It knew that that the wealth effect would do nothing to crank up the Main Street economy. For the Fed, it was just a pretext for engineering the greatest wealth transfer of all times and for whatever other goals it wanted to accomplish. And America’s investing public just pointed that out again.

And the fact that most investors are in the fog about the markets they invest in, the risks and rewards they face, the rip-offs they encounter, the fees they pay… is the reason Wall Street gets away with its game for as long as it does.

And the game has been honed to perfection. Everyone is playing along. And it performs miracles. Or it did. Because just now, it inexplicably conked out. With major consequences. Read…. The Wall Street Hype Machine Suddenly Breaks Down