One of the goals of Abenomics, Japan’s newfangled economic faith, has been to drive up inflation, come heck or high water. So the Bank of Japan has embarked on a historic money-printing binge.

It very effectively devalued the yen. Though that has been the plan all along, it cannot be said out loud because that would classify Japan as a “currency manipulator,” even worse than the US, where the Fed has subjected the dollars to a never-ending process of devaluation.

And it is causing a bout of inflation on all levels, now backing up deep into the price pipeline.

The BOJ’s Monthly Report on the Corporate Goods Price Index (PDF) shows that the Producer Price Index in July rose 0.3% from June, and was up 4.3% from July a year ago. In July 2013, it had already risen 2.2% from a year earlier. It was the 16th month in a row of increases.

This chart from the BOJ’s preliminary report (in 2010, the index was reset to 100) shows how producer prices started spiking very nicely with the arrival of Abenomics at the beginning of 2013 and haven’t paused to take a breath since: 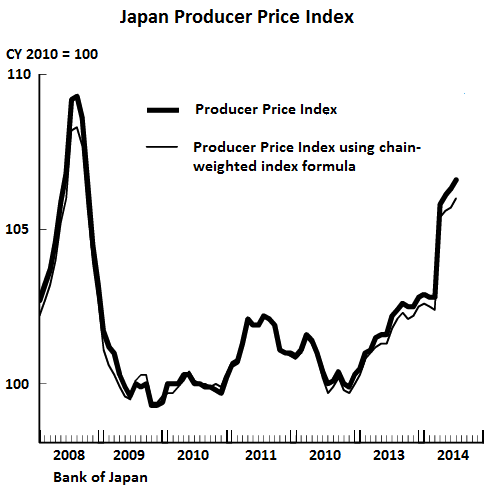 The raw materials index starting taking off in 2010 and has since soared 37%. All corporate goods prices are up 6.6% from 2010. And going forward, these price increases will filter into consumer prices, which have already jumped.

The lack of inflation was the only thing that kept Japanese consumers spending as their household incomes have stagnated. But that has already changed. While household incomes are still stagnating, inflation and a consumption-tax hike ate up their purchasing power – on the principle of “inflation without compensation.” And any additional inflation is going to be debilitating.

The official eye-opener will be published on Wednesday: GDP will likely show a steep plunge. Expect an annual GDP “growth” rate of worse than -7% (yup, that’s a negative). A sign that the hapless Japanese consumer is getting what that voted for in late 2012.

Rising exports and trade surpluses have always been vital to Japan. And reconstituting them is a cornerstone of Abenomics. But that plan has totally gone to heck. Read….. The Flame-Out Of Abenomics, in One Crucial Chart