By Editor, Fabius Maximus, a multi-author website with a focus on geo-politics. This is a shortened version of two articles that originally appeared here and here.

Growth slows in the developed nations due to several factors, as debt levels rise. Have we entered the “coffin corner” where we cannot grow sufficiently fast to service our debt?The US economy has repeatedly failed to resume normal growth after the crash. But potentially worse is the decline in long-term growth estimates.

Our plight: our maximum growth rate slowing to our stall speed.

In January 2011 the Federal Research estimated the long-term growth rate of the US economy at 2.5 – 2.8%. By June this year, their estimate had fallen to 2.1 – 2.3%. Years of low investment by the private and public sectors, a decaying education system, rising debt levels, and demographic headwinds (an aging society) — all are slowing America’s growth.

The potential boost from technology so far remains speculation about the future.

That’s far too close to the economy’s stall speed of 2%, below which it’s at risk of falling into recession — much like an airplane going too slow, generating insufficient lift to stay aloft (this is a controversial theory; now we’re testing it). Perhaps the US economy cannot accelerate by much from current growth rates (without undesirable rates of inflation), and it cannot slow without falling into recession (ruinous under current conditions, with monetary policy tapped out, and with fiscal deficits and unemployment still too high, but falling).

This will make economic management quite difficult for the foreseeable future. Persistent slow speed will create pressure for stimulus (perhaps with long-term ill consequences). Failure to quickly stimulate to even small mistakes might easily trip the economy into recession.

The Economic Cycle Research Institute (ECRI) also sees the problem in its “Cognitive Dissonance at the Fed?:

Federal Open Market Committee (FOMC) members have long submitted their projections of U.S. real GDP growth for the “longer run,” to which they expect it “to converge over time – maybe in five or six years – in the absence of further shocks and under appropriate monetary policy.”

… So what is being gradually acknowledged – without any publicity or fanfare – is that long-term U.S. GDP trend growth is converging towards its 2% stall speed. If so, almost every time GDP growth experiences a slowdown that carries it below trend, it will also fall below the recessionary stall speed. This is an implicit endorsement of ECRI’s longstanding “yo-yo years” thesis, which predicts more frequent recessions for the advanced economies than we have seen in past decades.

Ian Hathaway and Robert E. Litan, The Brookings Institution, point at a similar phenomenon in “Declining Business Dynamism in the United States: A Look at States and Metros“:

Business dynamism is the process by which firms continually are born, fail, expand, and contract, as some jobs are created, others are destroyed, and others still are turned over. Research has firmly established that this dynamic process is vital to productivity and sustained economic growth. Entrepreneurs play a critical role in this process, and in net job creation.

But recent research shows that dynamism is slowing down. Business churning and new firm formations have been on a persistent decline during the last few decades, and the pace of net job creation has been subdued. This decline has been documented across a broad range of sectors in the U.S. economy, even in high-tech.

John G. Fernald, Federal Reserve Bank of San Francisco, in “Productivity and Potential Output Before, During, and After the Great Recession,” explains:

US labor and total-factor productivity growth slow ed prior to the Great Recession. The timing rules out explanations that focus on disruptions during or since the recession, and industry and state data rule out “bubble economy” stories related to housing or finance. The slowdown is located in industries that produce information technology (IT) or that use IT intensively, consistent with a return to normal productivity growth after nearly a decade of exceptional IT-fueled gains.

In the absence of effective and comprehensible economic theory, economists often rely on analogies. Such as comparisons with aerodynamics. Flying complex vehicles at high speed under variable conditions, often with inadequate or old information — the role of pilot has similarities with that of central banker.

A common mistake of central bankers is raising rates to curb inflation while the economy is in fact on the brink of recession. That’s similar to another dreadful aviation term, the graveyard spiral: “This flying by ‘the seat of the pants’ and failing to recognize instrument readings is the most common source of ‘controlled flight into terrain.'”

Today the US economy might have flown into conditions similar to another perilous aerodynamic situation — the coffin corner. From the Sky-brary (slightly edited):

The coffin corner (aka Q Corner) is the altitude near which a fast aircraft’s stall speed equals its critical Mach number. As an aircraft climbs towards the altitude that defines its coffin corner, the margin between stall speed and critical Mach number becomes smaller and smaller until the Flight Envelope boundaries intersect. At this point any change in speed creates serious problems. Turning the aircraft could result in exceeding both limits simultaneously, as the inside wing slows down and the outside wing increases speed. Encountering turbulence can push the aircraft outside its flight envelope. 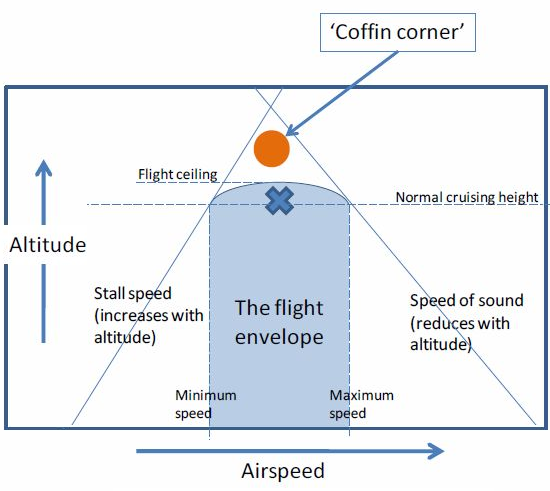 Is the US economy at the “coffin corner”?

Well, replace “airspeed” with “GDP growth”, and “altitude” with “debt-to-GDP”, and you can probably start to see where we’re heading with this. According to the OECD, the government debt-to-GDP ratio for 10 large economies (Australia, Canada, France, Germany, Italy, Japan, Korea, Spain, the UK and the US) has surpassed the previous peak recorded at the end of WWII. …  the overall debt burden for the 34 OECD member countries will continue to climb in coming years. While there has been selective deleveraging in certain sectors of the global economy (e.g. US households and DM banks), debt, rather than having been reduced, has mostly been transferred from the private to the public sector.

The question is whether advanced economies, in an effort of trying to limit the damage caused by the Global Financial Crisis, have put themselves into a debt coffin corner. With debt-to-GDP (altitude) as high as it is, they can’t allow growth (airspeed) to slow too much, or debt risks becoming unsustainable. At the same time, high debt levels are likely to be a material drag, making growth hit an insurmountable economic “sound barrier” much earlier. This is because without the boost provided by credit growth, it is difficult to achieve the kind of GDP growth that was possible when debt-to-GDP was lower.

But there’s more. High levels of debt-to-GDP ratios make it difficult for governments and central banks to steer the economy – just as excessively high altitude makes it difficult for a pilot to keep control of the aircraft. Central banks have successfully employed Zero interest rates policy (ZIRP) to keep debt sustainable but, as the economy continues to recover, they may now find themselves cornered: keeping rates as low as they are may lead to overheating (or even bubbles) in certain sectors of the economy; but raising them may stall others by making the existing debt impossible to service.

Now for a bad scenario

What if the economy’s long-term growth rate continues to decline? What if our aggregate debt continues to increase so that the economy’s “stall speed” increases (i.e., a higher minimum speed is needed to keep the economy aloft)? What if the two lines cross? There is relatively little research on these matters, and little agreement among economists, but if the metaphor holds, the outcome wouldn’t be desirable. By Editor, Fabius Maximus. The full-length articles are here and here.

There are some good reasons for this stall speed. Consumers are “straining against rising prices on daily essentials” and are cutting back on things they want to buy, Gallup found in a new survey. Read…. Gallup Slams Lid On Hopes For US Economy

9 comments for “Has America’s Economy Entered the “Coffin Corner”?”