Restaurants and ecommerce in particular. But people are not flocking back to department stores suddenly, that was a myth.

Retail sales, reported today by the Commerce Department, are based on retailers’ revenues, obtained by survey of about 5,500 retail locations, so from the company’s point of view, and not “consumer spending” from the consumer’s point of view, which we’ll get later this month. These revenues show that retailers knocked it out of the ballpark in October, especially online retailers and restaurants, as customers were buying hand-over-fist. And it wasn’t inflation.

Inflation has abated for many goods, which is what retailers sell, and shifted to services, which retailers don’t sell. On a month-to-month basis, the CPI for durable goods fell for the second month in a row (-0.7% in October); the CPI for food at home (bought at food and beverage stores which we’ll get to in a moment) rose month-to-month at a slower rate (0.4%) than the spikes in prior months. But the CPI for gasoline rose 4%. 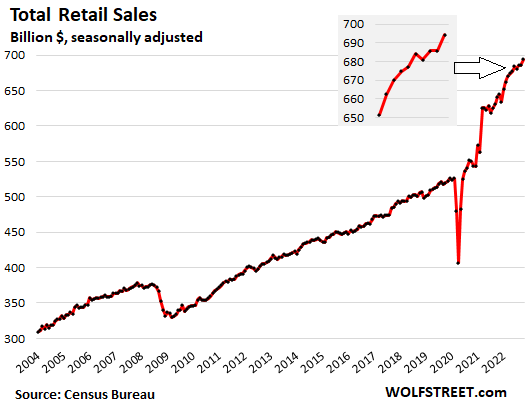 Sales by category of retailer, largest to smallest:

New and Used Vehicle and Parts Dealers: Sales rose 1.3% for the month and by 5.2% year-over-year, to $129 billion, up by 25% from three years ago. This is the largest category of retailers. The sales increase occurred as the CPI for used vehicles fell month to month, while the CPI for new vehicles still rose, though at a slower pace than before.

New vehicle inventories overall are still woefully low: they’re largely depleted of fuel efficient vehicles, though inventories of full-size trucks and SUVs are now building up, as demand has shifted following the spike in gasoline prices that started in 2021. Overall sales are still constrained by shortages of vehicles that are in demand. 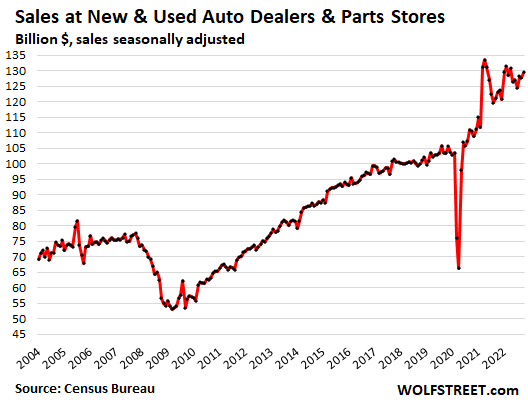 Ecommerce and “nonstore retailers”: sales rose 1.2% for the month, and by 11.5% year-over-year to a record of $112 billion, seasonally adjusted, up by a mind-boggling 73% from three years ago, as the shift in retail sales from brick-and-mortar stores to online operations continued. This is the second largest category of retailers.

Sales by the ecommerce operations of brick-and-mortar retailers are included here, along with sales at stalls and markets: 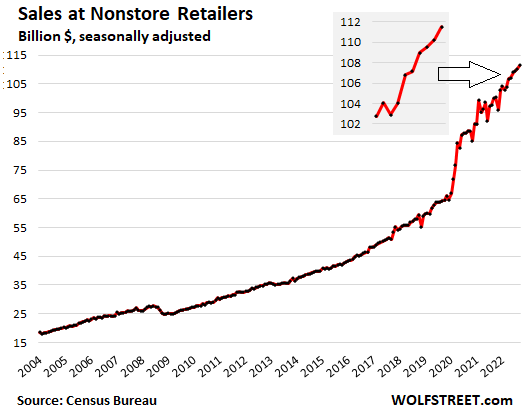 Restaurant sales have boomed so fast that this category has surpassed food and beverage store sales, making it the third-largest category — Americans really do eat out a lot. And here too, revenues are easily outrunning even the raging CPI inflation for food away from home. 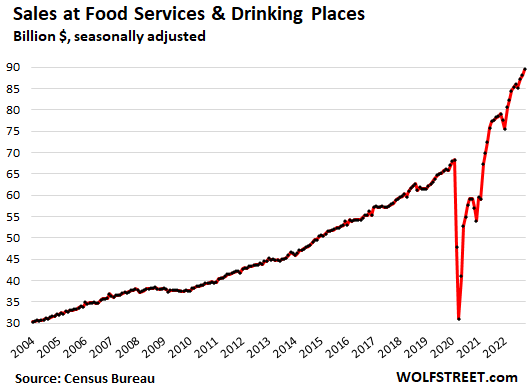 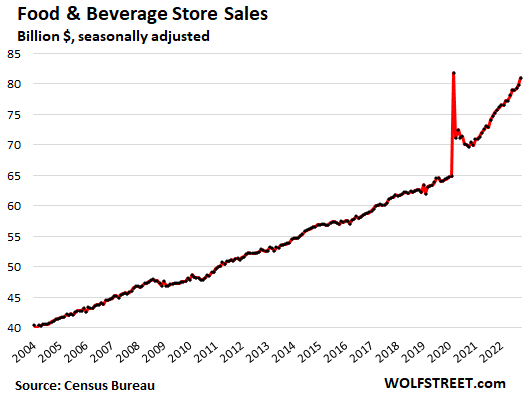 Sales at gas stations include whatever else gas stations are selling, and many of them are in effect convenience stores. 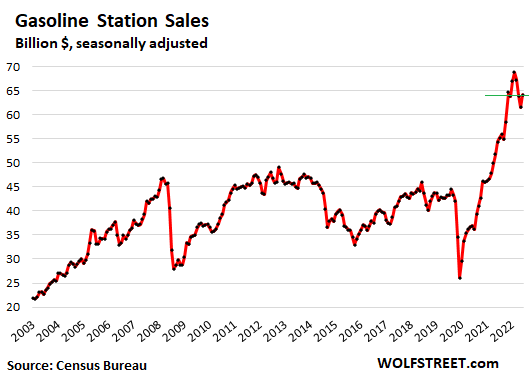 General merchandise stores: Sales ticked up 0.2% for the month, and 3.1% year-over-year, to $59 billion, up by 20% from three years ago. This category includes Walmart and Target, but not department stores which we’ll get to in a moment: 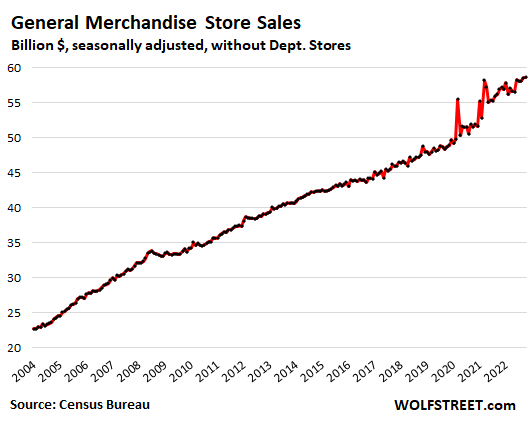 Building materials, garden supply and equipment stores: Sales rose 1.1% for the month, and by 9.2% year-over-year, to a record $44 billion, up 40% from three years ago: 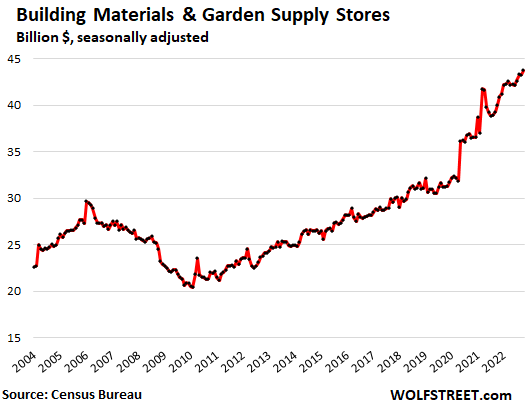 Clothing and accessory stores: Sales were unchanged for the month, and up 3.1% year-over-year, at $26 billion, up 19% from three years ago: 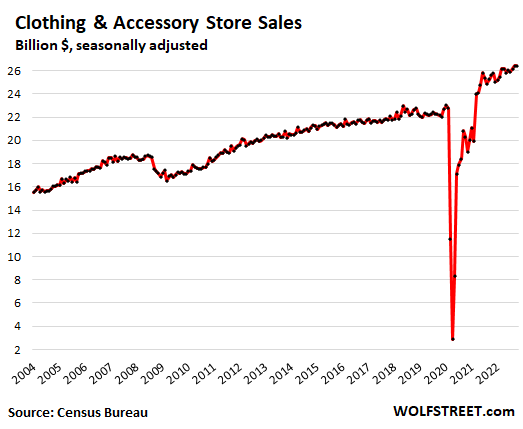 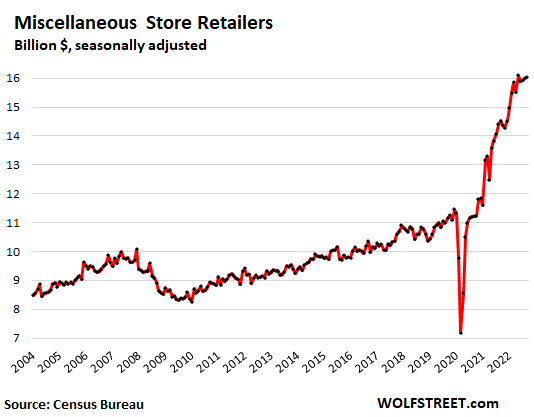 Furniture and home furnishing stores: Sales rose 1.1% for the month to $12 billion and were flat year-over-year. Compared to October 2019, sales were up 19%: 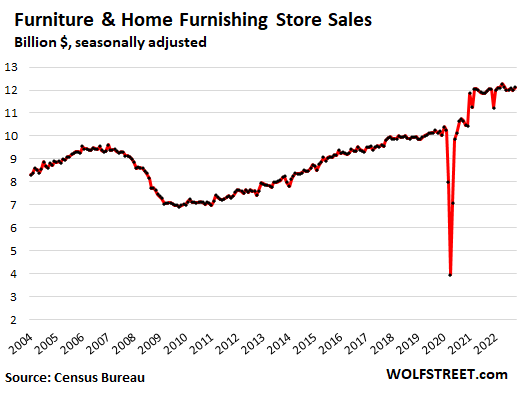 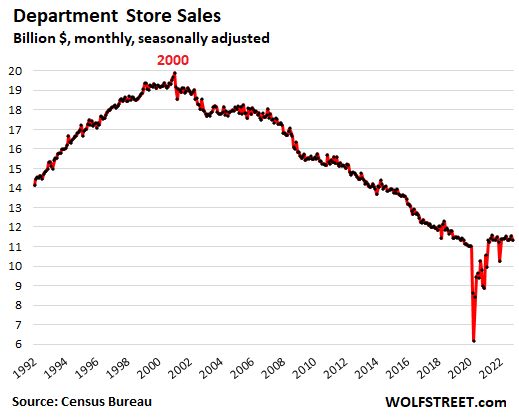 Department stores on track to irrelevancy. Many department store chains have been liquidated in bankruptcy court over the years, and others have used the bankruptcy process to shed stores, and the few that haven’t filed for bankruptcy have closed many stores, and continue to close stores, such as Macy’s. Americans have discovered that anything you can buy at a brick-and-mortar department store, you can buy online, including at that chain’s website. And lots of stuff you cannot buy at the store because they’re out of the right color or size or whatever, you can buy online just fine and have it shipped to your place.

In the early 1990s, department stores sales accounted for nearly 10% of total retail sales. In October 2022, they accounted for less than 1.9%. On track to irrelevancy: 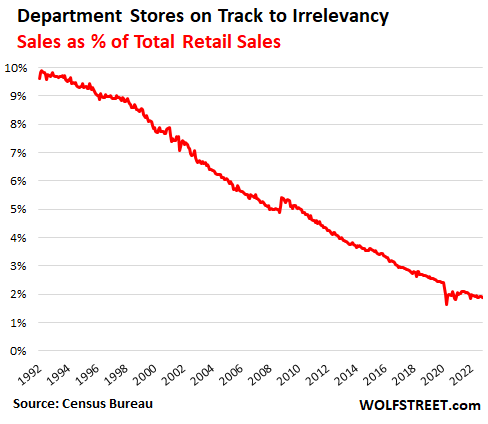 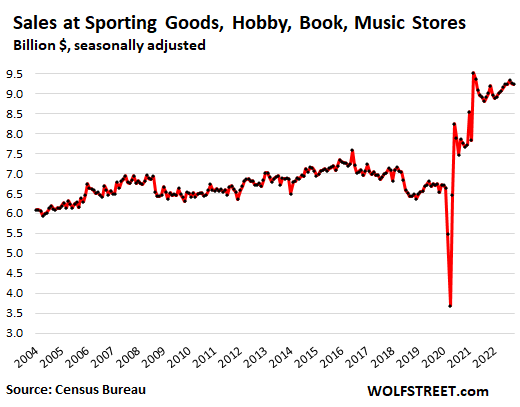 Electronics and appliance stores: Sales fell 0.3% for the month, and 12.1% year-over-year, to $7.4 billion, and where down 1% from October 2019. Electronics retailers are dealing with price drops across the board, which is the normal trend for consumer electronics: the CPI for information technology fell by 1.0% for the month and by 10.8% year-over-year. 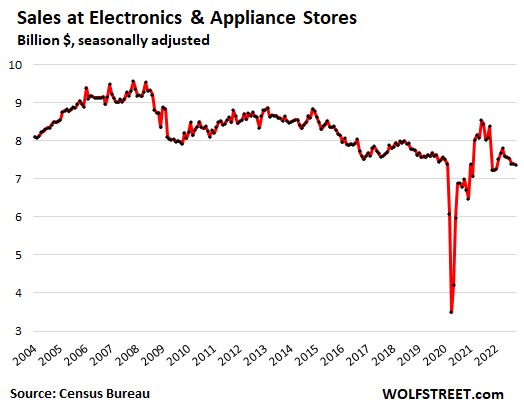 126 comments for “No Landing Yet, Soft or Otherwise? Retail Sales Hit it out of the Ballpark, But Not All Retailers: By Retailer Category”