The startup and VC bubble is tied to a booming stock market, but stocks are unraveling, and that strangles the money flow.

Silicon Valley Bank, under the holding company name of SVB Financial Group, is the 13th largest bank in the US, with $214 billion in assets. It is heavily involved in the ecosystem of startups, venture capital firms, and private equity firms in Silicon Valley and other cities in the US, and globally.

It reported earnings Thursday evening, which included a lament about the downturn in the venture capital and startup ecosystem and the “volatility” in the stock market – “volatility” meaning that the Nasdaq Composite is down 27% so far, which is strangling the money-flow into the startup ecosystem.

On Friday, its shares [SIVB] plunged 17.1%, and are now down by 53% from the peak in early November, 2021, which was about when the Nasdaq peaked. Silicon Valley Bank also went through the Dotcom Bust: After a huge run-up, its shares collapsed by 77%, about the same as the Nasdaq. So here we are today, with its shares, after a huge run-up, down 53% so far (data via YCharts).

In the CEO Letter to shareholders, the bank lamented that the “IPO window remained closed,” and that “companies across all investment stages experienced challenges to accessing liquidity, with total VC investment declining 24 percent quarter-over-quarter.”

It warned that “the increase in unreserved charge-offs and new NPLs [non-performing loans] may indicate potential emerging pressure from market volatility.”

This “market volatility” means the decline in the stock market because in this ecosystem everything hinges on a booming stock market that gives early investors, such as VC and PE firms, a chance to get out and sell their shares to the public at huge prices, and it gives startups a chance to raise lots of money, and pay off all obligations. But now that IPO window has closed.

And the letter said, “We have adjusted our full-year 2022 outlook to reflect our expectations that challenged public equity markets and declines in venture deployment will continue for the remainder of 2022, which will pressure our balance sheet growth.”

During the earnings call, CFO Dan Beck said that the expects another 20% sequential decline in Q3 and Q4 in private venture investing.

The letter also noted that venture capital and private equity firm are sitting on “record levels of dry powder (8 times higher than 2000 levels) to put to work, and we believe they will do so as valuations stabilize.”

In Q2, there were only 21 IPOs, and most of them were minuscule, according to Renaissance Capital, compared to Q2 last year, when there were 118 IPOs: 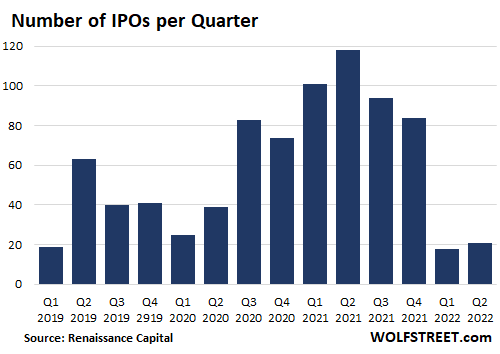 Then there’s the suddenly plunging income.

The Parallels to the Dotcom Bust.

Silicon Valley Bank survived the dotcom bust that ravaged the Nasdaq, Silicon Valley, San Francisco, and investors all around. The Nasdaq plunged 78% from the peak of 5,046 in March 2000 to the trough of 1,114 in October 2002. And with lots of help from the Fed’s money-printing and interest-rate repression that inflated all asset prices, the Nasdaq finally reclaimed 5,000 in 2015. It took 15 years.

During the Dotcom Bubble, shares of Silicon Valley Bank skyrocketed, multiplying by four, from early 1999 to September 2000, but then shares plunged by 77%, giving up nearly all the gains, and taking it back to 1998 levels.

Not shown on this chart, but I’ll mention it for your amusement: It took SIVB until 2013 and lots of money-printing and interest-rate repression by the Fed to reclaim its 2000 high for more than just a brief moment:

SIVB is a barometer of what is happening in the startup ecosystem: The funds from the stock market have nearly stopped flowing into the ecosystem, and early investors are having trouble unloading their shares at sky-high prices, which changes everything.

There is now a new prudence among these investors. Valuations are getting slashed. Suddenly startups are exhorted to cut their cash burn-rates because they won’t be able to raise new money to burn if the prospects of positive cash-flow are in eternity somewhere.

There is now talk among startup CEOs about the length of their “runway,” meaning how much time they have left before they run out of money.

Startups of all kinds, from crypto to biotech, are laying off people left and right in order to cut their expenses and lengthen their runway. And they’re cutting advertising expenses, because that’s the easiest to cut.

And the whole thing goes into low gear, and when these companies run out of money, they vanish, and their employees go somewhere else to find a job. At this point, there is still huge demand for tech workers, and it seems they’re getting picked up pretty quickly for now. But this is just the beginning – the first two quarters of deflating the biggest startup bubble and stock-market bubble ever.