The phenomenon of a spurt in buying during the early phases of rising mortgage rates – until they reach a magic number.

The NAR then converts the actual sales to a “seasonally adjusted annual rate” of sales, which for all existing homes fell 5.8% in October from a year ago, the third month in a row of year-over-year declines, as the blistering boom has lost some steam (historic data in the chart via YCharts): 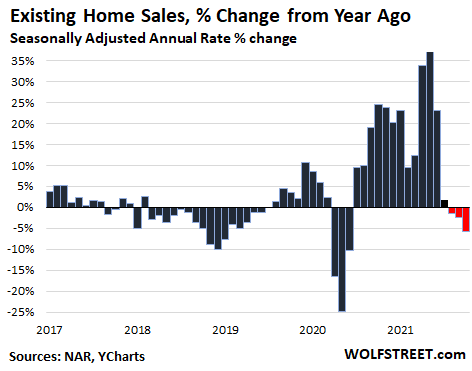 The “seasonally adjusted annual rate” of sales in October of 6.34 million homes, up 0.8% from September, was well below the levels of October through December last year, and far below the peaks during the 2004-2006 era. 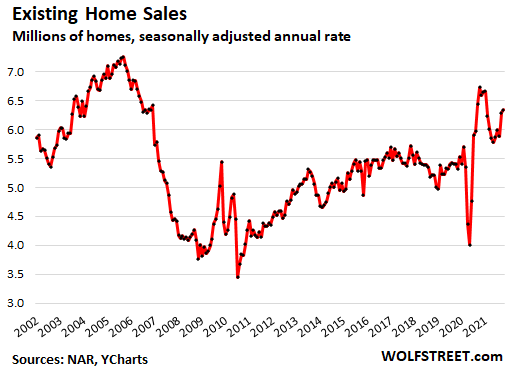 The median price rose 13.1% year-over-year, backing off the peak-frenzy spikes in May and June of over 23% year-over-year. The increases in September (12.7%) and October (13.1%) were the slowest all year.

At $353,900, the median price is down by 2.4% from June as seasonality has returned to the housing market, normally with a peak in June or July and a low point of January or February. Seasonality had completely blown out the window last year. 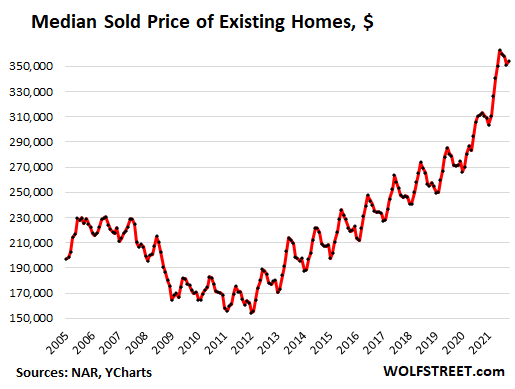 Supply of homes listed for sale remained at 2.4 months at the current rate of sales, which is very tight, but up from late last year and earlier this year. The number of unsold homes on the market dipped to 1.25 million homes, seasonally adjusted: 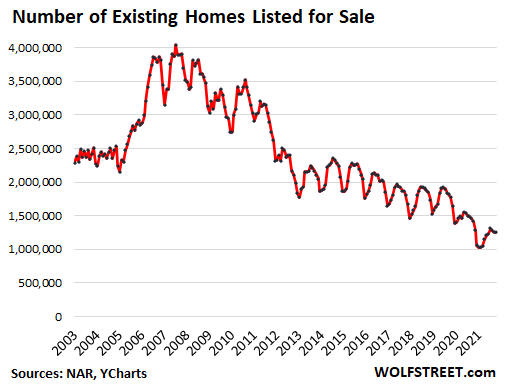 Rising mortgage rates. The average 30-year fixed-rate mortgage last week was 3.1%, up from 2.87% in mid-August, according to Freddie Mac data. 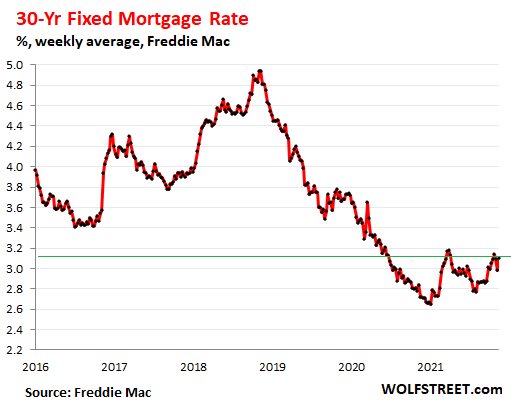 QE has pushed down long-term rates; and the end of QE followed by a balance-sheet reduction will allow long-term rates to drift higher. And this will be reflected in mortgage rates.

A well-established phenomenon when mortgage rates begin to rise: Potential home buyers try to lock in a low rate before rates rise even more, which leads to a spurt in home sales early in the phase of rising mortgage rates.

This phenomenon of the fear of rising mortgage rates is what is now supporting home sales, “despite low inventory and increasing affordability challenges,” as the NAR report put it.

But as mortgage rates then rise beyond some magic number, the additional costs put a damper on demand. Last time it happened was in 2018 and steepened when the average mortgage rate rose past the 4% mark toward 5%. Somewhere in between was the magic number after which home sales began to swoon.

Given the sky-high prices now, the housing market may be even more susceptible to higher mortgage rates than in prior years, and the magic number may be quite a bit lower than it was in 2018 as insurmountable affordability pressures for many people will sap some demand.

All-cash sales rose to 24% of total sales in October, up from 19% in October last year. Cash buyers include institutional investors and individual investors and second home buyers that have the cash, or can temporarily borrow against their portfolio and get a mortgage later.

Within that group, individual investors and second-home buyers – including those not putting their old home on the market to ride up the price increases for a while longer – purchased 17% of the homes, up from 14% a year ago.

121 comments for “Home Sales Down 5.8% from Year Ago, amid Tight Inventory, “Increasing Affordability Challenges,” and Rising Mortgage Rates”