Even the Fed is getting antsy about this raging mania house-price inflation. Housing Bubble 1 is starting to look cute in comparison.

House prices spiked 19.7% from a year ago, the biggest year-over-year increase in the data going back to 1987, according to the National Case-Shiller Home Price Index today. But the national index of this raging mania doesn’t do justice to individual metropolitan areas, where price spikes reached up to 32%.

The Fed is getting seriously antsy about this massive house price inflation, on top to the regular consumer price inflation that has hit 30-year highs. Just today, the president of the Federal Reserve Bank of St. Louis, James Bullard, who’d been fretting months ago about the “threatening housing bubble,” came out with a proposal to reduce the assets on the Fed’s balance sheet right after the taper is completed by mid-2022, which would purposefully allow long-term interest rates, including mortgage rates, to rise significantly.

“Everything can occur much faster than it could have in the previous recovery,” he said.

Markets have started to anticipate the end of QE. Long-term interest rates have started to rise. The 10-year Treasury yield is currently at 1.55%, the highest since mid-June. The average 30-year fixed mortgage rate today was 3.16%.

The mind-boggling price spikes in the charts below for individual metropolitan areas are based on the “July” Case-Shiller Index. The July data are a three-month moving average of closed sales that were entered into public records in April, May, and June. That’s the time frame we’re looking at here.

Los Angeles metro: Prices of single-family houses rose 1.4% in July from June and spiked by 19.1% year-over-year.

All Case-Shiller Indices were set at 100 for January 2000. The index value for Los Angeles of 359 means that house prices have soared by 259% since January 2000, despite the Housing Bust in between. The Consumer Price Index (CPI) has risen by 62% over the same period.

This puts Los Angeles on the dubious pedestal of being the most splendid housing bubble on this list. All charts below are on the same scale as Los Angeles to show the relative heat of house price inflation in each market since 2000. 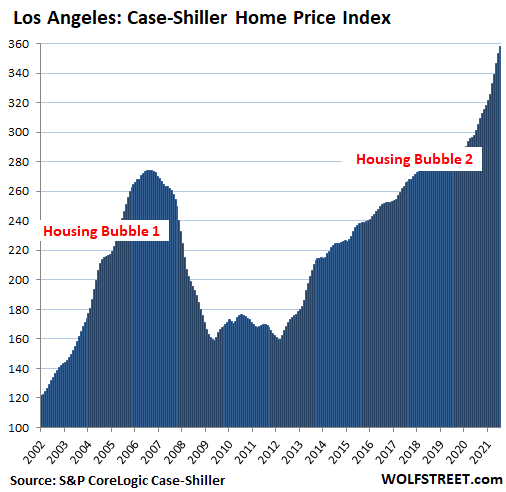 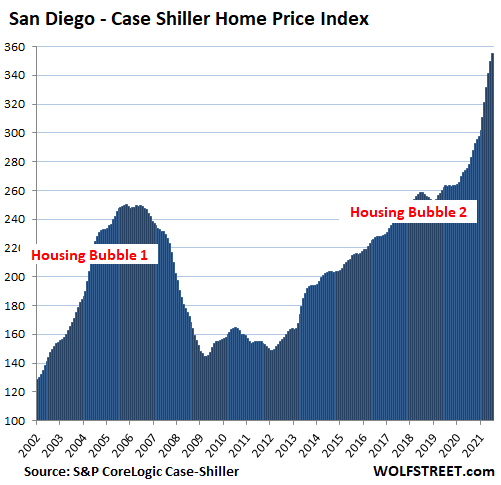 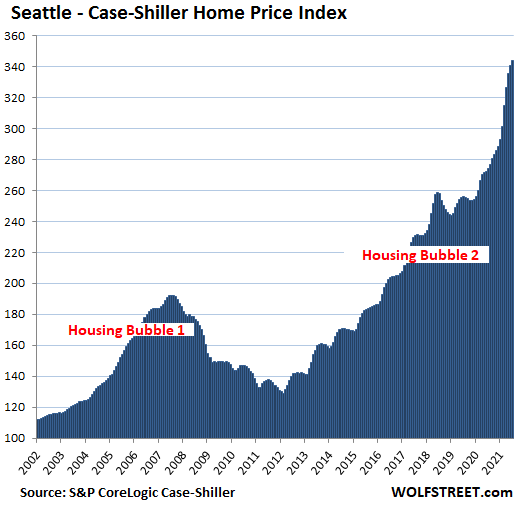 The San Francisco Index covers the five counties of San Francisco, San Mateo, Alameda, Contra Costa, and Marin. The peculiar thing here is that while prices of single-family houses have been spiking, condo prices have gone nowhere in years. 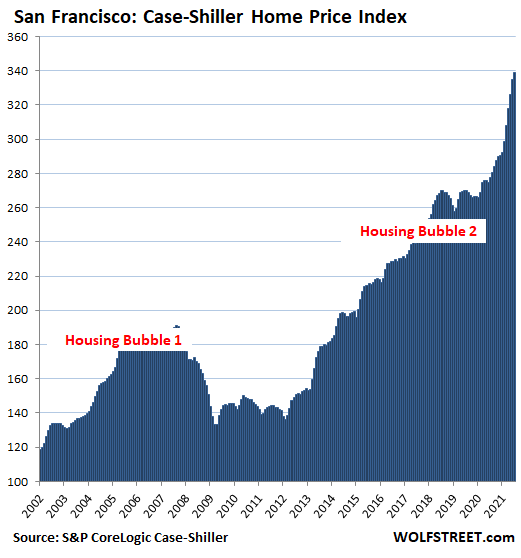 Condo prices have been wobbling along the flat-line since early 2018. For the month, condos rose 0.3% and were up 5.4% from the beaten down levels last year: 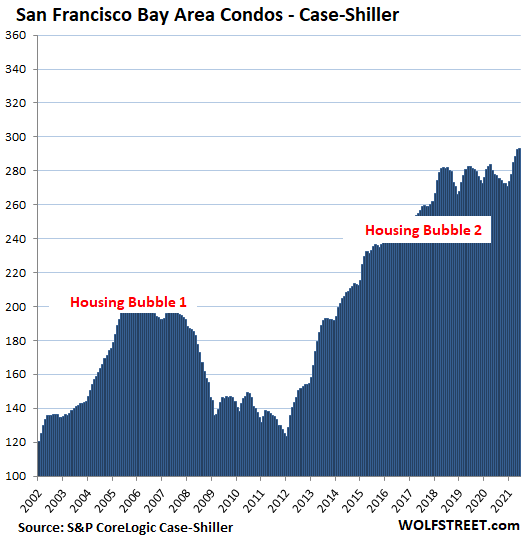 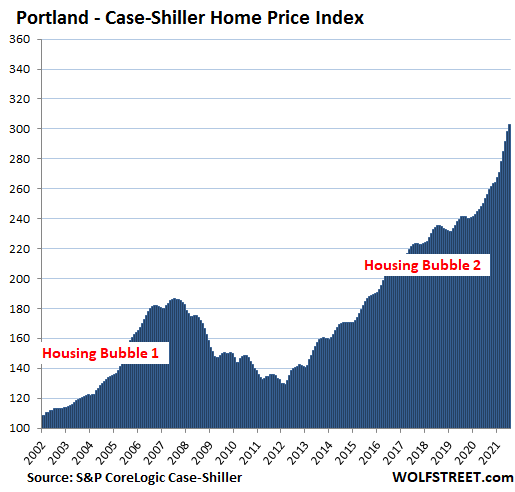 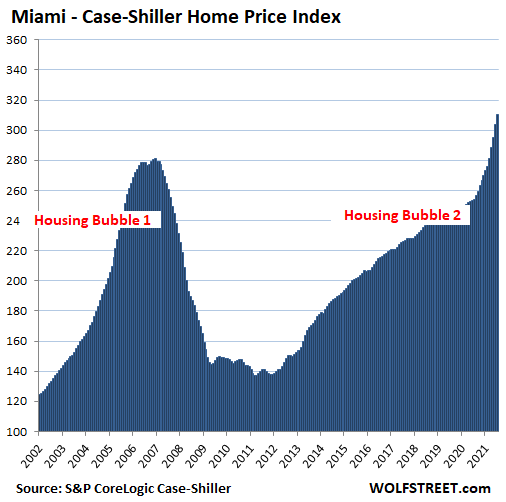 The New York metro covers New York City plus counties in the states of New York, New Jersey, and Connecticut, ranging from some of the most expensive real estate in the US to less expensive areas: 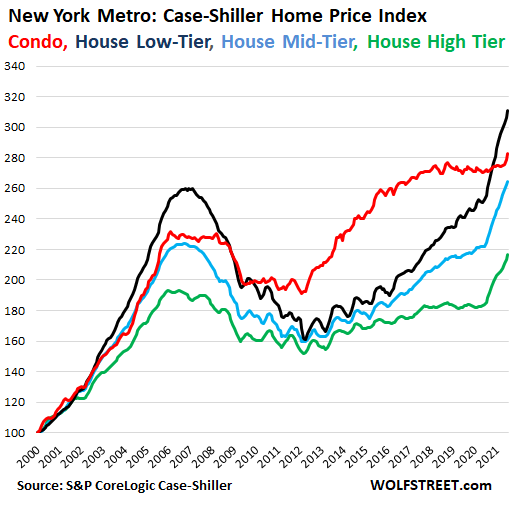 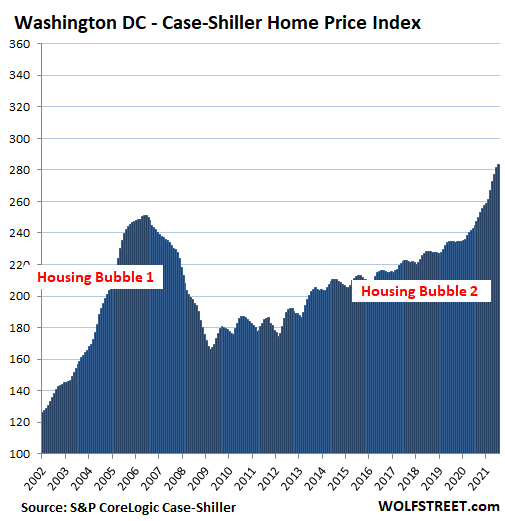 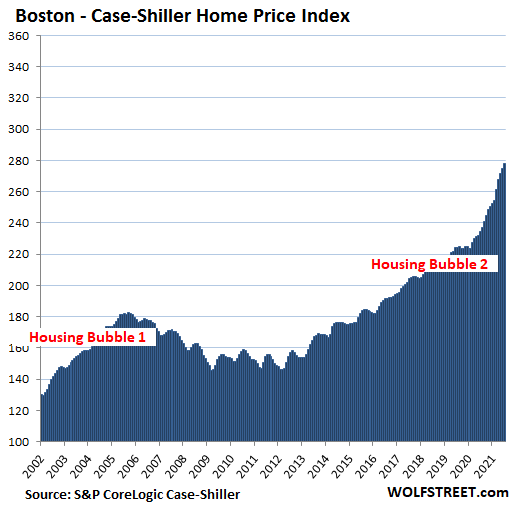 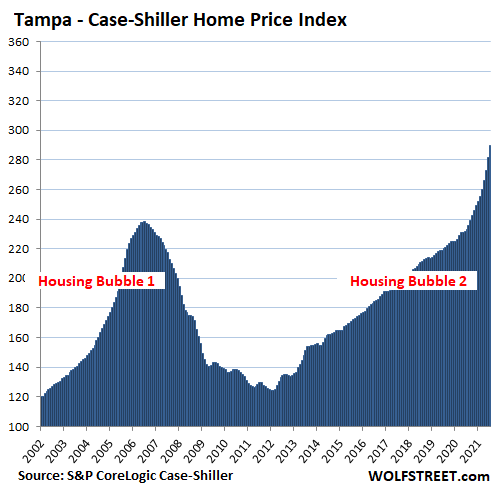 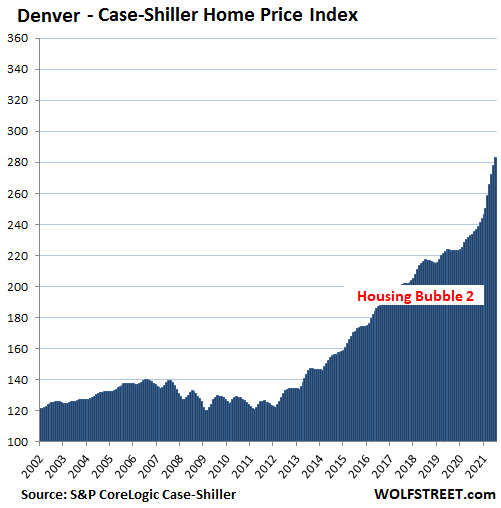 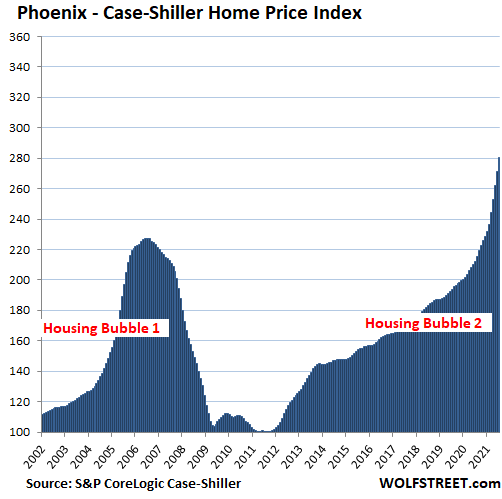 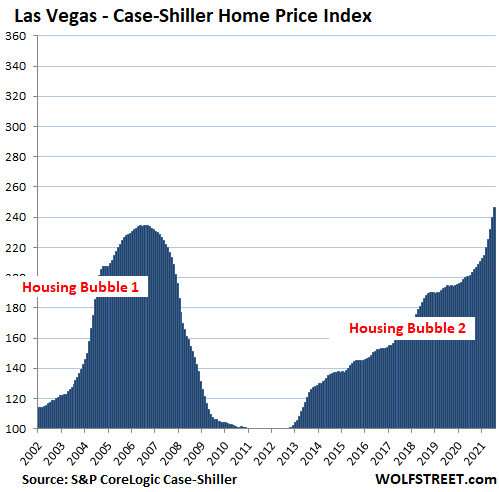 The remaining cities in the 20-City Case-Shiller Index have experiences less-hot house price inflation since 2000 and thereby don’t yet qualify for this list of the most splendid housing bubbles. 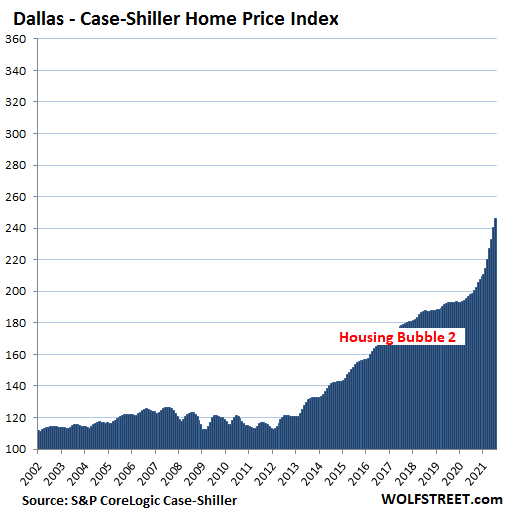 322 comments for “The Most Splendid Housing Bubbles in America: Holy Cow, September Update”